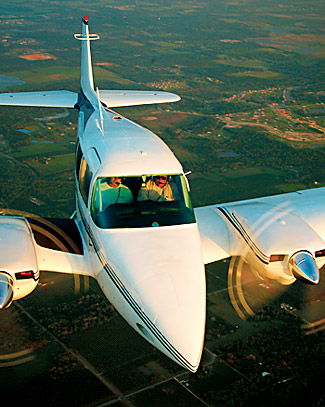 Picture this: You’re cruising straight and level at 8,500 feet in your A36 Bonanza. You’re luxuriating in smooth air and sunshine, and there’s perfect weather at your point of departure, destination and all points in between. The engine is running perfectly, everything is working well, your passengers are happy and then…

BANG! There’s a tremendous noise as if the engine has just exploded, air rushes into the cockpit, charts begin flying around and what was a smooth, comfortable flight has turned into a nightmare.

It’s ironic that one of the most startling emergencies in general aviation is often one of the most benign. Despite the drama associated with a door popping open in flight, it’s usually no major problem, little more than a nuisance and occasionally an embarrassment, since the pilot is responsible for securing the cabin before takeoff.

I’ve lost count of the number of doors that have popped open in flight, but I’m sure it’s more than a dozen. If memory serves me correctly, all but two have been my fault. At the risk of assuming that other pilots make the same mistakes I do, that’s probably a reasonable ratio for most aviators—five or six to one. In other words, if a door does pop open in flight, you probably have only yourself to blame.

Aircraft doors and windows come in a variety of shapes and sizes, and they’re not always mounted in the same places. Obviously, the possibility of a door popping open goes up as the number of portals to the cabin goes up. Though the majority of piston singles feature a single door on the passenger side, most Cessna and Commander singles, SOCATAs, Beech Musketeers and a few other types feature doors on both sides of the cabin. Many twins feature airstair doors at the left rear of the cabin. The Aero Commander and Aerostar twins may be boarded through a pilot’s door, so by definition, the captain is the only person who can close that door.

FAA certification standards demand a minimum of two exits on any airplane that’s approved for carrying six people. The Cessna 337 Skymaster centerline thrust twins offered an interesting anomaly to this rule. The original normally aspirated and turbocharged Skymasters were six-seaters fitted with a single cabin door and an emergency exit through a side window. When Cessna elected to pressurize the Skymaster to 3.35 psi in 1973 (the same system later used in the P210), the company certified the airplane with only five seats and eliminated the emergency window exit. This avoided compromising the integrity of the pressure vessel with an additional opening.

Contrary to what you might think, popped doors aren’t always so dramatic. Some aircraft use a double door-lock system, typically one at the top where the door folds into the roof and the second at elbow level. Checklists don’t always guard against forgetting the overhead latch. “Doors and windows secure” hardly describes the nature of the problem. “Bottom and top door latches secure” might be a better checklist entry.

The usual consequence of leaving a top latch unlocked is that the top of the door is sucked slightly open, but the bottom latch stubbornly holds the door in place. Piper Cherokees have employed this type of latch for years. This problem is often more insidious than you might think, as there’s no characteristic “bang!” or tremendous rush of air. The top of the door merely sucks away from the frame as airspeed increases and relative air pressure decreases. In this day of ever-quieter active noise-reduction headsets, a pilot may not even notice the slight hiss associated with the open top latch.

Incidentally, if you’re the pilot in command in the left seat, and the only door is on the right, don’t assume this excuses you from the responsibility to verify that all doors are closed and properly latched. I nearly always reach across my right front passenger and verify that the door is properly closed.

There are several types of cabin door locks, but perhaps the most common is the camlock/detent. This simply employs a camlock that pulls the door in tight, then slips over center to a detent that locks the door into place. Other doors employ a system of one or more pins that must slide into place to secure the door.

Cabin doors aren’t the only offenders. Windows and baggage compartments need to be secure, too. Usually, an open window is pretty much a nonevent and can be closed in flight without much hassle. Plane & Pilot regularly opens and closes the windows on the company Skylane for purposes of air-to-air photography.

An open cabin door may be difficult or impossible to close in flight, especially on a low-wing airplane. If the door opens directly onto the wing, the suction can be far greater than on a high-wing airplane, and despite directions in the pilot’s handbook to the contrary, your only realistic choice may be to land, especially if you’re carrying a planeload of people.

High-wing or low-wing, the universal advice for closing a door in flight is to slow the airplane to minimize the suction; if possible, open a window to allow a cross-flow of air; induce a slip to shadow the appropriate side of the airplane; then give a mighty heave to close the door. Once in a great while, that even works, but don’t plan on it. The better technique may be to reduce speed to keep stresses on the door to a minimum and fly to the nearest airport.

An open baggage door is a little more frustrating than a cabin door, but under some circumstances, an open baggage compartment in flight can be deadly. Several years ago, the nose baggage door of a King Air popped open during a departure from Albuquerque, N.M. At least one bag was ejected and went through the left prop. The airplane torque-rolled and crashed off the end of the runway with fatal injuries to all on board.

Your first job, as with all emergencies, is to fly the airplane. The consequences of an open door in flight are rarely more than embarrassing, though I once had a door pop open on a ferry flight headed from Santa Barbara, Calif., to Honolulu, Hawaii, and had to eat several hundred dollars in additional costs for fuel, hotel, meals and ramp fees.

It seems practically every year, we read about another pilot who augered in because of nothing more serious than an open door in flight. Granted a popped door is a major distraction, but pilots shouldn’t allow themselves to become so absorbed in trying to close the door that they forget the prime directive. If you’re forced to fly to the nearest airport and land, that’s a far superior consequence than flying the airplane into the ground while you’re busy addressing an emergency that most often isn’t.