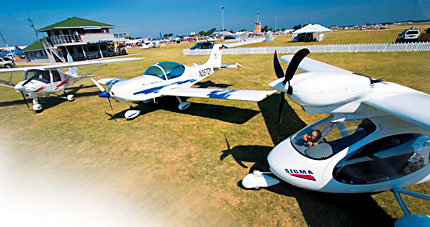 Looking back to Sun ‘n Fun 2005, it’s fair to say that was when the light sport aircraft bell was rung, and since then, they’ve been off to the races. In the short four months between early April and early August, 14 new aircraft received airworthiness certificates in the special light sport aircraft (S-LSA) category. Although several of these airplanes have been flying in Europe for years and the number of additional new aircraft receiving approval will certainly slow down over time, the figure is remarkable nonetheless.

To reinforce the coming of LSA, the EAA AirVenture 2005 saw a generous amount of coveted display area given over to a Sport Aircraft Mall, and according to a number of the companies displaying their products there, it was a good week for business. Within hours of AirVenture’s opening, the grass was well beaten down around everything on display from classic fabric-and-tube designs, such as the American Legend Cub, to the composite Tecnam, Kappa, Ikarus and Evektor models.

Like many of the LSA manufacturers, Dr. Ram Pattisapu, president of Dallas-based IndUS Aviation, has noticed a huge upswing in LSA interest. “We’ve been showing up at Sun ‘n Fun and Oshkosh for several years now. We’ve gone from several dozen people coming by our aircraft display and asking about light sport aircraft a year ago to several hundred showing up now,” he says. “Now they’re smarter and they’re asking very technical questions or talking to us about setting up flight schools with our airplanes. This is going great.” Even though the FAA didn’t start handing out LSA certifications until the end of April this year, IndUS will handily beat its 2005 projections for aircraft sales.

Jon Hansen of Hansen AirGroup of Georgia has been importing and selling Italian-made Tecnam aircraft for several years and, along with other advocates, was a key player in promoting the rule changes that created the light sport aircraft category and sport-pilot certification. With several of his Tecnam models now meeting LSA requirements, he’s facing a common problem among those currently marketing LSA; that is, too many buyers are chasing too few airplanes.

Hansen says, “We had an allotment of 33 airplanes for all of 2005, and as of early August, we’ve sold all of them and are taking deposits for January 2006. For 2006, the factory had committed to produce 200 aircraft for worldwide sales, and I’ve told them I’ll need 50, and possibly more. So, they’re ramping up production.”

Scott Anderson of Sport Aircraft International, whose company sells the Evektor SportStar, shares Hansen’s dilemma, especially when it comes to being able to offer demo rides. “I’ve been inundated with people who want demo flights, so I’ve set up both West Coast and East Coast sales centers where demos are available.” As to delivering SportStars, Anderson, too, is dealing with the problem of success, with his summer allotment of seven already spoken for and all but one of his following order already sold.

In North Carolina, Doug Hempstead set up Fantasy Air to market the Allegro line of LSA, and found interest so high that he had to accelerate his plans for an assembly building even before his airplane received its airworthiness certificate. Hempstead notes, “Demand is much stronger than we had expected it to be. We expected to need our new building sometime in 2006, but instead, broke ground early in 2005 and completed the building early in the summer.” Fantasy Air expects to have sold and delivered 18 aircraft by the end of 2005, and with its factory promising to dedicate a production line just for U.S. consumption, it forecasts a minimum of 40 delivered in 2006.

A similar story is being told by Edwin Miller, owner of Kappa Aircraft of Pennsylvania, selling the Kappa KP-5. The factory is gearing up for a production run of at least 10 aircraft a month. Miller points to what he and others consider a significant shift in the type of potential buyers of LSA. “In the beginning, the whole thing with LSA seemed to be the medical issue, and the LSA idea spread very quickly through that group [pilots who wished to avoid traditional medical certification and would self-certify instead as long as they held a valid driver’s license]. But about a year ago, we started hearing from a lot of pilots with private-pilot certificates and a good medical saying that they would buy a new S-LSA and be able to do all of the flying they have done anyway.”

Tim Elliott is the president of American Legend Aircraft of Texas. After garnering a lot of attention at Sun ‘n Fun with the debut of its modern, U.S.-produced, J-3 look-alike Legend Cub, the company is now reacting to much stronger demand than it had anticipated. Elliott says, “The rate of new aircraft and new customers entering this market is incredible. We’re currently sold out of production through May of 2006 and are working hard to increase our production capacity. The majority of inquiries are coming from high-time pilots who are looking to lower their operating costs and, at the same time, to have an outlet to satisfy their love of flying.”

Each dealer we spoke with stated that it’s hard at work to guarantee new owners that service, parts and warranty repairs will be available, but one company is attempting to chart a more ambitious and broad-based path to meet the demand for airplanes, training and service. SportsPlanes.com, headed by Joss Foss, is working to set up a national network of Regional Centers designed to provide everything a potential LSA owner and pilot needs, including offering a variety of aircraft from different manufacturers, and being able to offer maintenance, repair and warranty services around the country.

Foss says, “If you’ve got a factory that only produces 40 to 50 airplanes a year, where does an owner go for help? If you’ve got a Ford car, you can go anywhere for service, so we’re setting up a network to do that for our airplanes through our Regional Center program. And by having multiple manufacturers in our system, the economics work out.” Foss is quick to point out that while work is well under way to develop the SportsPlanes.com network, “it’s not there yet today, but it’s in the process of being set up.”

As to the critical areas of financing and insurance, all of the dealers asked say they have established working relationships with financial institutions and insurance agencies, and claim few, if any, problems in either area. They report that for buyers with a good credit history and the resources to finance an airplane, companies such as AirFleet Capital Inc. and Beacon Aero Credit are willing to write LSA loans. For insurance, one prominently mentioned company is longtime aircraft insurance agency Falcon, which is working with underwriters such as Global to provide LSA policies.

IndUS’ Ram Pattisapu took an active role in seeking out financing and underwriting partners to help him sell airplanes long before the feds began handing out LSA certifications. The IndUS Thorpedo and SkySkooter designs originated with John Thorp, progenitor of the Piper Cherokee line. His Thorp was certified by the FAA in the 1960s, which gave Pattisapu a credible start with the companies he approached. “We were coming to them with basically a certified aircraft, so it wasn’t difficult when we had a second type of certification, light sport aircraft, to find all the partners we needed. Also, we’re based here in the United States, not out of the country.” IndUS offers as many as four different LSA lenders and insurance from Falcon.

There are a number of organizations that went to bat to create a new category of airplanes and simplified rules for those who wish to fly them. Chief among them is EAA, and the name often associated with that effort is Earl Lawrence, EAA vice president of government and industry relations. For several years, Lawrence has spearheaded EAA’s work with nascent industry groups and the FAA. Now, as the LSA and sport-pilot effort is a reality, Lawrence looks ahead to the next series of challenges that must be met to ensure that LSA will have staying power.

He cites the need to overcome some common misconceptions concerning flight training and designated pilot examiners (DPEs). “Every CFI in the country needs to understand that they’re already a sport-pilot instructor, that if they’re already qualified to instruct in single-engine land aircraft, they can instruct in an LSA single-engine land airplane.”

Lawrence also wants existing DPEs to be aware of how easy it is to add the sport-pilot examiner endorsement to their rating; it’s as simple as making a phone call and asking for the addition. That seems to be happening, as by mid-August, the number of DPEs endorsed to give ground and flight exams for LSA had quickly grown to 48.

For factory-built S-LSA and for E-LSA (usually kit versions of the same aircraft), the floodgates appear to have finally opened and, at least for a while, a rare combination of both a seller’s and buyer’s market may simultaneously exist (especially for patient buyers). The dealers claim they have reason for optimism, as long as they take good care of their customers, and that begins with their ability to deliver new airplanes. According to Joss Foss, “There’s no question about the market; it’s just a matter of being able to supply enough aircraft to keep from frustrating people.”

EDITOR’S NOTE: Prices listed for light sport aircraft are base prices, and may not include shipping if the aircraft is imported from outside the United States. Additionally, some LSA pricing is tied to foreign currencies, so base prices can vary as exchange rates fluctuate. Like other aircraft, many of the models listed offer a list of options, including upgrades in engines and instrumentation. Use the information supplied in this article to contact manufacturers or United States distributors for light sport aircraft.