As a dating couple, Brian and I often had to be very creative about finding time to spend together since I’m an airline first officer and Brian is the operations coordinator for Team Oracle. In July 2007, we were happily anticipating a week off that we were going to spend with our dear friends (and fellow Cub enthusiasts) J.R. and Paige Bisset. They own a remote and tiny island on Georgian Bay in Ontario, Canada, that’s accessible only by floatplane or boat. I could hardly wait to get there and start our float adventure.

Our plans for the trip included getting some time in our friends’ two airplanes on straight floats, a Super Cub and a Cessna 185. I was especially excited to fly the Super Cub. Brian and I both love Cubs. The only time that I had ever flown one on floats was at Jack Brown’s Seaplane Base in Winterhaven, Fla., several years earlier. I had loved it and was eager for more.

This charming island is an amazing place where there’s no electricity and no running water—nothing but our cabins and the natural beauty of the bay. We flew in low over the scenic wonder of Georgian Bay to arrive at the island via the Cessna 185. By the time we had landed and taxied up to the dock, the skies were lowering. We had expected to bring the Cub to the island the next day, but it didn’t look like the weather would cooperate with us. The clouds became scattered, and by the next morning, they were broken only a few hundred feet off of the water.

I had accepted the weather delay and was prepared to sleep in all morning. I was sleepily surprised, then, to hear the 185 take off as J.R. and Paige fought the low ceiling to make their way home to pick up the smaller plane. Little did I know that the weather, which appeared to be just a delay for me, was causing everyone else a lot of anxiety. Plans were afoot that a few low clouds weren’t going to thwart!

Once the Super Cub landed, everyone else could put their covert plans into action. It had been some time since Brian had flown floats, so J.R. gave him a 30-minute refresher checkout in the Cub. I was a little bit nervous that they would need more time in the plane and that Brian and I wouldn’t be able to fly together until the next day. When they returned, J.R. surprised me by saying that Brian would take me up right away. I was so excited! 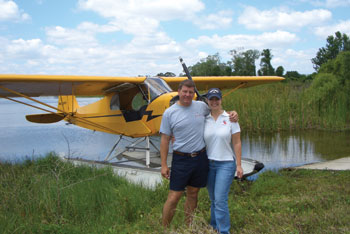 Brian fired the little plane back up and taxied us out. We could see right through the clear shallow water to the rocks and grasses on the bottom, so we had to be extremely careful. When we got to the open bay, Brian pointed the Super Cub into the wind and added all of the power a 150 hp engine has to give. I felt the floats work to overcome the friction and tension of the water, and we lifted off. The clouds were clearing up as the day got warmer, so we had the whole sky to play with. The Cub’s windows were open and the cool air streamed in. Sunlight sparkled on the water of the bay as we flew low, soaking in the scenery and the joy of being aloft.
Advertisement

We didn’t want to make J.R. worry, so after a while, Brian said we should probably head back. We made one more pass over the picturesque island to make sure the wind hadn’t changed, and Brian let the little plane back down toward the surface of the bay. With the power at idle, the floats kissed the water and we let the plane sail a little bit in the breeze.

Brian reached up and shut the engine off. As we coasted to a stop on the water, he asked me if I thought the flight and the landing were okay. I replied that they were great, and he asked me if I could think of anything that would have made them better. I told him they had been perfect. He then turned around, opened a box containing a beautiful engagement ring, and asked me to marry him. Through my tears and smiles, I finally managed to say, “Yes!”

We were met back at the dock with huge smiles from Brian’s conspirators and a fantastic bottle of Krug ’95 champagne. Paige and J.R. prepared an amazing dinner for us to celebrate the occasion. Needless to say, we were both thrilled beyond words. Brian and I were married April 18, 2008, and he surprised me once again. This time with an incredible wedding present—a float rating in a J-3 Cub!

This is your column! We’d like to hear from you about your unforgettable flights. Please send your stories and photos to [email protected]