I was just over 1,000 miles south of Honolulu on the second leg of a four-leg ferry flight from Santa Barbara to Subic Bay, Philippines, when all three GPSs failed. The Cessna 421’s panel mount system and both of my portables stopped working at the same time. My lat/long position froze in place, and nothing was changing on the distance readout to Majuro, Marshall Islands. Since I was fairly certain I wasn’t hovering, that had to be wrong. God had turned off GPS.

I’d passed over Johnston Island an hour before, and I knew there was nothing but water between me and my next stop. Once you pass Johnston, there’s not even a rock sticking up out of the Pacific to serve as an emergency waypoint. In GPS language, a total signal loss is called a “blink,” and it usually only lasts for a few minutes, it says here. This blink seemed to go on forever.

Not a problem, I thought, trying to think positive while flying a comparatively tiny airplane above the world’s largest ocean. I tuned Majuro’s NDB on the ADF and figured I’d home on that until the GPS signal came alive. There was no joy on ADF, either. Hmmm. I had my paper flight plan of theoretical waypoints between Honolulu and Majuro, but what chance did I have of finding the three-mile-wide atoll and lagoon from 1,000 miles away by dead reckoning?

A few more minutes passed, before GPS came alive and showed me still on a proper course to Majuro, 974 nm distant.

When I landed, I discovered Majuro had experienced a power failure, something that happens about once a week in many mid-Pacific islands. When that occurs, the voltage drop is supposed to start a gas-powered generator automatically to keep the NDB on the air. The key words in the last sentence are “gas-powered.” Of course, someone had forgotten to refill the generator’s gas tank. Apparently, since I was the only one to need the NDB, no one else knew it was off the air.

(Perhaps ironically, the NDB at my home airport of Compton was installed on the side of my hangar. The joke around the airport was that if the weather was really bad and I could reach someone on Unicom to open the door of my hangar, I could simply fly directly into it.) 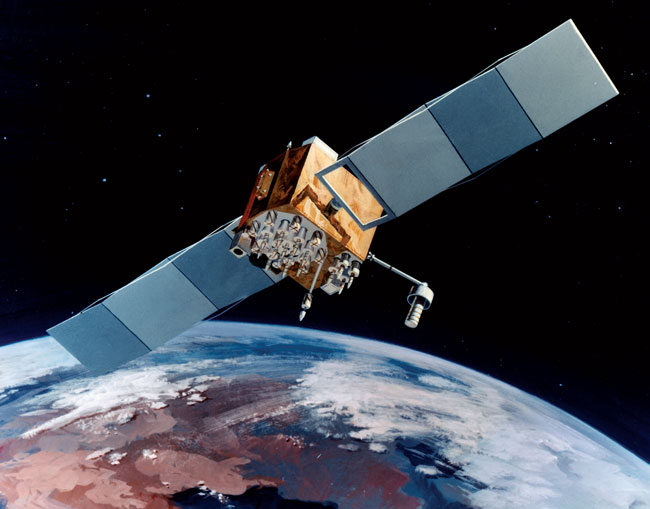 Since the early ’90s, GPS has gradually supplanted NDB/VOR/INS as the dominant radio navigation system for virtually all air traffic, domestic and international.

Back in 1972, USAF Colonel Bradford Parkinson was assigned a budget of $2.5 billion to bring GPS to life. The reason was simple. During the Vietnam War, American bombers dropped 7 million tons of predominately dumb bombs that lived up to their description, often falling on the wrong targets.

This resulted in what the military calls “collateral damage” and even fratricide of South Vietnamese and American soldiers. Parkinson’s mission was to produce a surgical bombing system that could also be used for precise navigation. The slogan he coined for his Pentagon staff of engineers was to “build a satellite navigation system that could put five bombs in the same hole.”

In 1970, when GPS was little more than a glimmer in many Air Force generals’ eyes, one seemingly minor detail threatened to shut down the project before it even got started. Though the concept of GPS was envisioned as theoretically possible in the early ’70s, the execution was not. Many high-ranking Air Force officers were extremely skeptical and felt that developing satellite navigation was a total waste of time and money.

One of the first technical roadblocks was finding atomic clocks small and light enough to fit into an orbiting satellite. Atomic clocks were mandatory for GPS, as they can measure time in billionths of a second, and that was exactly the level of accuracy required for GPS. The Air Force had already done the math, and it knew the Navstar (Navigation System using Timing and Ranging) satellites would need to be orbiting 12,500 miles up at 8,700 mph, Mach 13, if you prefer (though the speed of sound has no meaning in space since sound cannot travel in a vacuum).

That translates to 12,760 feet per second, so any clock that was even 1/100th of a second fast or slow could result in an error of roughly 128 feet. Compound this error over a number of satellites, and the Air Force couldn’t reasonably expect precision closer than a few hundred feet. That’s not much better than Vietnam accuracy with the older generation of unguided bombs, not nearly acceptable for stuffing a 500-pounder into a specific window of a building.

By its very nature, GPS would need to be far more accurate, and that meant atomic clocks. These devices offer unbelievable accuracy, an average error of one second every 30 million years. Though such amazingly accurate clocks did exist in 1975, they were incompatible with weight and space-limited satellites. The smallest atomic clock was about the size of an apartment refrigerator and weighed roughly 100 pounds. In order to assure double redundancy, each GPS satellite would need to be fitted with three atomic clocks. That’s 300 pounds of clocks alone and wouldn’t leave much allowance for the remainder of the electronic payload.

Fortunately, Colonel Parkinson’s Pentagon team tracked down a relatively unknown German scientist, Dr. Ernst Jechart, who had successfully synthesized an atomic clock into a container the size of a half-loaf of bread, weighing 3 pounds. The Air Force convinced Jechart to move to the U.S., and he helped shrink atomic clocks to a workable size. 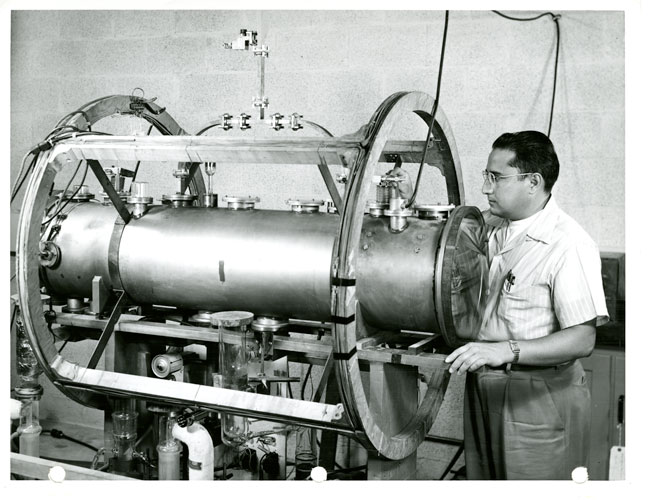 The first of the Navstar satellites was launched in 1975 after several years of development, followed by a half-dozen more in rapid succession. To test the concept, Colonel Bradford arranged for five attack aircraft to bomb a small “X” at the Yuma Proving Ground in Arizona, using GPS-guided bombs. When the test was complete, the doubters pointed to the fact that there were only four closely-spaced holes in the small, 20-foot-wide target. One bomb had apparently missed the target completely.

“Closer examination revealed that two of the GPS-guided bombs had, indeed, impacted in the same hole,” said Parkinson. “Okay, that’s not five in one, but some of the disbelievers among the Air Force brass who swore GPS would never work were silenced.”

Another peripheral benefit of satellite navigation was to provide pilots with a means to operate through an overcast, hitting targets they couldn’t see. Improved ground and air navigation was another valuable benefit that would eventually far outstrip the military advantage. GPS became partially operational in 1987 when there were 14 navigation satellites orbiting the Earth, just over half the planned constellation.

My first opportunity to fly with GPS came in 1991, when I flew copilot on the prototype Swearingen SJ-30 Syber Jet from San Antonio to the Paris Air Show and back. The airplane was fast and comfortable, but it had only been flying for three months and still had some significant electrical teething problems to overcome. Both VLF-Omegas burned up before we got to our first stop in Bangor, Maine. We made the eastbound crossing to Greenland, Iceland and landed in Paris six hours before the show curfew.

While I was in Paris, I stopped by the American Pavilion and talked to the folks at recently created Garmin Avionics, the brainchild of co-founders Gary Burrell and Min Kao (GAR- MIN). Aviation products manager Tim Casey loaned me a new Garmin GPS-100AVD for the return trip to San Antonio. The GPS network was still nowhere near complete (there were only 16 satellites flying in June 1991), but each satellite made two orbits a day. That was good enough for occasional fixes, and it was all we needed.

(Earlier that year, the Air Force had temporarily retasked several Navstar satellites to overfly the Middle East, so Coalition forces would have 24-hour coverage of Iraq during the first Gulf War.)

The Air Force finally commissioned the full constellation of 24 Navstar orbiters in 1994. When GPS was fully enabled, it was capable of pinpointing position to an accuracy of three to five meters. Since ’94, eight backup Navstars have been launched to bring the total constellation to 32. Though the additional eight “birds” are considered spares to replace early-generation satellites, all 32 are operational much of the time.

Initially, GPS accuracy for non-military applications was degraded, a process known as “selective availability.” The Air Force introduced time errors that reduced accuracy to about 100 meters (328 feet). This was done to diminish the possibility of foreign governments using our own targeting system against us. Selective availability was decommissioned in 2000, and the common position error was upgraded to 10 meters or less.

The Soviet shoot-down of KAL007, a Korean Airlines 747 that wandered into Soviet airspace while flying from Anchorage to Seoul, South Korea, in 1983, caused then-president Ronald Reagan to authorize unrestricted GPS use for all civilian aircraft worldwide. (Unfortunately, GPS would have made little difference, as pilot error in forgetting to switch the autopilot from “heading” to “INS” placed KAL007 30 miles inside Soviet airspace.)

As everyone must know by now, GPS operates by multiple triangulation, but, contrary to popular belief, the Navstar satellites do nothing more than transmit their position (changing at the aforementioned 12,760 feet per second) to anyone with a proper receiver. The receivers lock on to three satellites’ positions for a two-dimensional, lat/long fix; four satellites add the vertical dimension, altitude.

The signals travel from satellite to receiver at the speed of light, optimally 186,282 miles per second. The receiver then calculates a circular line of position from each satellite, and where those lines intersect is where you are. All other functions—groundspeed, course, time/distance to waypoint and destination, etc.—are strictly internal computer functions. (A standard joke among Air Force pilots when GPS was entering service was that you had to make corrections at night when it was dark, and the speed of light was therefore much slower.)

Initially, it was rare to receive more than seven satellites. Today, with as many as 32 Navstars in orbit, it’s not unusual to trap 11 or even 12 satellites. The more birds you can receive, the more accurate the fix.

In a quarter century of flying with GPS, I’ve never had a repeat of my brief Navstar blink. With help from accuracy upgrades such as Differential GPS and WAAS (Wide Area Augmentation System), the Global Positioning System has become perhaps the world’s most reliable and accurate air and ground navigation tool, and it now serves in a thousand new civilian applications, most of them not even imagined in the 1970s.

It took nearly 50 years and $4.5 billion to reach that pinnacle of success, but the reliability and accuracy of GPS is nothing less than amazing. The GPS signal is also incredibly tenacious. Transmitter power on the Navstars is a mere 50 watts, but the signal is remarkably pervasive and resistant to attenuation.

Years ago, I was preparing to launch for Australia in a new Mooney Bravo, and Tim Casey of Garmin sent me the company’s newest portable to test. I was packing my suitcase in the master bedroom of my house at the time, so I installed a full pack of AA batteries in the new GPS and tossed it on the bed. Ten minutes later, when I was ready to assemble my navigation bag, I noticed the Garmin had already initialized and locked on to six satellites. I called Casey, and he asked if my house had a wood roof.

I confirmed that it did, and he simply laughed. The new model had picked up the GPS signals through the roof and was ready to navigate. That feature could come in especially handy if you ever decide to move your house to a new location.