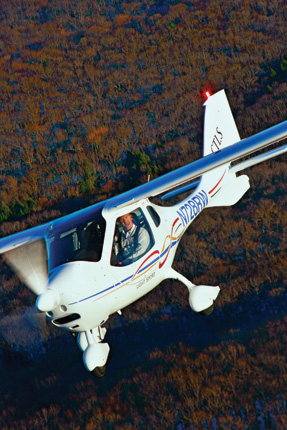 In our April 2009 issue, Jim Lawrence launched his series of articles about LSA training in a Flight Design CTLS. In the June 2009 issue, he took us through solo. Now, he takes us through the checkride.

Right after soloing in 860LS, the lovely Flight Design CTLS, I feel light as a cloud.

Now what? Can’t do pattern work for the rest of my life—I want to go places! Next task: Start banging away toward the checkride.

My brief elation deflates like a soufflé in an earthquake with the thought of all that lies ahead. So…

Back To School
Shooting landings on your home field is a great confidence builder, but now it’s time to venture out into the big bad world. John Lampson, my rock ’n’ rollin’ CFI, says that, next, we’re making a jaunt over to nearby Windham Field (IJD).

Windham is a quiet little nontower airport nestled in the lush, tree-choked Connecticut countryside, 25 miles due east of Hartford (HFD). Lampson wants to improve my ability to recognize and deal with traffic by having me land away from and return to home base.

We pile into the plane on a blustery afternoon with 18-knot gusts, practice some crosswind landings, which 860LS handles with ease, and off we go.

Turning east, Lampson reminds me of my first flight in the CTLS: “It was about this rough, remember?”

“Yep. But look how much more relaxed you are.”

I grin and flex my bicep.

In his best Han Solo voice, he says, “Don’t get cocky, kid.”

Indeed, as we fly on to knock off touch-and-goes at Windham, I think of that first turbulent flight, which seems like a long time ago. I remember fighting the airplane. Now, I truly feel at home flying it.

Having the right instructor is a huge boon to a great training experience. And if he’s a punster, all the better. En route, I spot an airplane crossing our path.

Every flight student should be so lucky to learn from an instructor like John Lampson.

After the out-and-return to Windham, he turns me loose on my second supervised solo. Back I go to Windham, excited, a little nervous, reveling in my new freedom.

As I approach Windham, four other aircraft announce their intentions to also land at Windham, all at once! A big twin is even practicing emergency descents from 2,000 feet. Nothing like a dose of the real world on your first sojourn from the nest.

Remembering something Grandpa used to say, “Let people know what concerns ’em,” I keep my wits and stay on the radio, broadcasting my position at regular intervals while rubbernecking everywhere for traffic. Soon enough, the circus is over, and I pull off a few landings. Whew!

Flight-Sim Practice
During a long and nasty spell of Northeast thunderstorm activity, I endeavor to stay sharp in my home flight-simulator “cockpit.” I have an extremely cool but affordable Saitek X52 Pro Flight Control System (around $250 street price), which consists of a joystick, throttle quadrant and rudder pedals.

Thoroughly tres tech, with more switches, toggles and buttons than I’ll ever use. The throttle quadrant even has an MFD. You can set up a radio stack and other interactive readouts and truly go nuts with this thing.

The stick is mounted on a pedestal between my legs. With the throttle on my right and rudder pedals on the floor, it’s just like the CTLS.

But the real issue is, how well do they work? Amazingly well, indeed. The spring feedback mechanisms create a realistic feel. About the only thing the Saitek system won’t do is pick you up and move you around to simulate G-forces.

My flight through virtual airspace comes courtesy of Microsoft Flight Simulator X, which is fantastic. MSF gets better and better with each iteration. I’ve got a robust computer with a quad core CPU and 8 GB of fast memory, so I select every possible graphic enhancement possible: high-resolution terrain, wind simulation, thermals and more to give a close-to-real simulation.

Cross-Country & Beyond
On a bright and clear day with light and variable winds, we launch on the route Lampson has picked for my solo cross-country flight. Southeast we go to Groton-New London Airport (GON) in Connecticut, then 36 nm over to New Haven, then 35 nm back to HFD.

Landing at New Haven, I had caught myself assuming that I could touch down effortlessly instead of using the “every landing counts” attitude, and I was a little sloppy. “Am I really ready,” I had wondered as we flew home, “to solo today?”

At HFD, Lampson says I’m good to go. Tired, a mite queasy from light bumps and the stress of learning, I decide to think about it over lunch.

One Subway sandwich calms the jitters: Let’s do it!

I launch solo at 4:40 p.m. to head south to Groton, remembering to avoid the enormous 1,000-foot AGL tower in the approach path to Groton. First landing? Aced it. Next?

The CTLS and I sail up and out over the southern Connecticut coast…right into the golden brilliance of the westward sea, so bright I have to block the glare with my hands.

Another 1,500-foot tower en route keeps me vigilant, but I’m pumped anyway—halfway home! New Haven tower directs me to land on runway 32 instead of my expected 2. No sweat. Touchdown is nominal, if not artful, and soon I’m on my way down the last leg to Hartford home base.

The tower gives me a long 10-mile final for runway 2. Over the fence, I’m 100 feet up when I see a flock of 100 or so seagulls parked right on the numbers!

I eyeball them. They eyeball me.

Seventy-five feet. Some start to take off, be ready! Fifty feet. And then, as if Lampson was on the ground shooing them off to give me the ultimate test, the entire flock launches right in front of me. I push in full power, riveting my focus on the nearest birds, climb out and over the flock and go around.

The tower controller says, “Nice job,” then asks if I can do a short approach for incoming traffic. Sure, I say, thinking, “Hell, after that, I can handle anything.” I roll into an immediate base, dump the flaps and touch down in the first third.

“Thanks for the help,” he says.

“My pleasure,” I answer, grinning to myself. Nothing like finishing off your cross-country solo with a little landing emergency.

Drum roll: Now it’s time to prep for the checkride.

Final Schoolin’ & The Big Day
After a few flights of checkride prep with rock star Lampson, I whip out the checkride DVD I received from Dave Jackson at King Schools. The six-CD course is indispensable for quashing flight exam jitters. The all-video course takes you along with John King on his oral and practical test with Rusty Sachs, veteran FAA flight examiner and Master CFI. You’re in the virtual cockpit throughout the checkride. I found it incredibly thorough and helpful in demystifying the whole process.

On the big day, Lampson and I fly up from Hartford to Minute Man Air Field (6B6), as quaint a country strip as you could hope to find. I meet my FAA examiner, Rob Albright, shake off my nerves, and up we go.

Mr. Albright, who hit it off immediately with Lampson—they both have rock bands!—has me climb to 2,000 feet and pull steep turns over a humongous field near some equally humongous radio towers.

Challenging myself to exhibit skill instead of just getting by the test, I turn right instead of my favored left direction. My reward? I finish the 360 within 40 feet altitude of where I started. Yes!

Next is slow flight at 60 with no flaps. “You passed that,” he says, then asks for approach stalls. Back on the stick, ease up the nose until a slight break with no wing drop.

Throughout, I make sure to communicate every flight-related action in my head ahead of time. I want my examiner to know I’m on top of the game. Near the end, he instructs me to land on an ultralight strip. Relaxed and confident, figuring I’ve got it knocked, I set up downwind, turn onto base…and I’m way high! Not again!

I tense up, throw the plane into a vigorous slip, back off, put slip back in, but I’m still 100 feet up, well beyond midfield, when he tells me to go around.

Unbelievable. All I had to do was pull S-turns or hold the slip all the way down: a big mental screwup. Have I just pranged the test?

“All right, you passed that…barely. Get some practice with Lampson on altitude for landing.”

Back to Minute Man, where I vow to pull off the Mother of All Landings. I feed in 15 degrees of flaps, bank onto final—at the perfect altitude—and grease it on.

We climb out of the wonderful CTLS. He smiles, sticks out his hand and says, “Fine job except for that one approach. You are now a sport pilot, congratulations.” Yee-haw!

Adding Up The Bennies
Later, Lampson and I sit over celebratory margaritas and the East Coast version of Mexican food. Reveling in our success, I thank him again for his wonderful tutelage. I can’t imagine a better learning experience.

On the way home, I study my gratitude. Think about how many people and resources it takes to teach you to fly: dedicated and selfless CFIs like John Lampson; committed visionaries like Tom Peghiny of Flight Design who see light sport as way more than just marketing; training materials from places like King Schools and ASA; and publishers like Plane & Pilot who understand the importance of spreading the aviation gospel each and every month to newbies and old hawks.

Another pilot with 35,000 hours told me recently that the ticket is “just a license to keep on learning.” Gotta never forget that.

Personal flight fosters aliveness. Flying has become, for me, remembering the joy, the challenge and the responsibility of living in the moment.

You need to plan ahead; that’s a big part of aviation. But, ultimately, you must be in the moment, second by second. I’ve got my ticket to ride. And I intend to use it!