At its exhibit area at AirVenture Oshkosh 2017, Continental Motors was displaying a Cessna 172 boasting a Titan engine conversion that got our attention. Developed by Stoots Aviation of Fairbanks, Alaska, the modification takes a 205-hp Titan engine, de-rates it to 195 hp and replaces the Lycoming IO-360 with it with remarkable results. 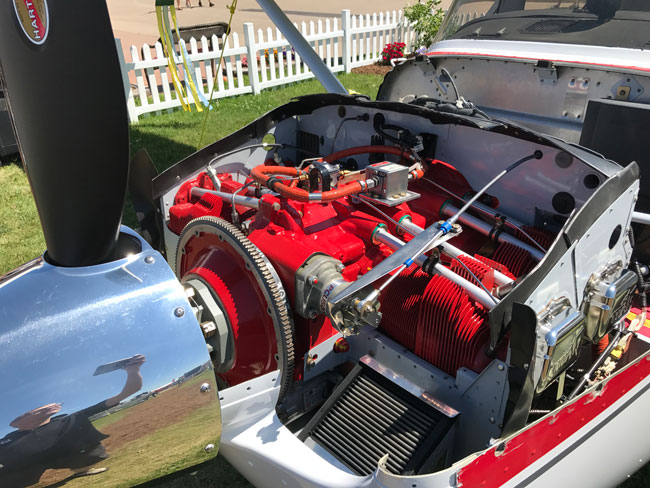 We visited with David Stoots, the creator of the STC, and got a first hand view of the Skyhawk engine swap package. Continental shared a video in which the same Skyhawk takes off first with its standard equipment Lycoming 180-hp Lycoming IO-360 equipped model and, after the engine change, with the Titan.

The performance improvement is dramatic, with shorter takeoff distance and better climb. Some of that is the result of the more powerful Titan engine, and some can be attributed to the new Hartzell Trailblazer composite constant–speed propeller that takes the place of the original equipment prop, resulting in greater static thrust and much smoother operation, too.

Stoots told Plane & Pilot that he accomplished the engine/prop swap in 16 days, a feat he said was partly due to the many components, including engine mount and harness components, that could be reused without modification. The STC includes a new, more efficient exhaust stack.

Stoots said that he’s still working to finalize the cost of the conversion but he shared that it will be considerably more expensive than a rebuilt or new Lycoming IO-360 engine, since the Titan modification also involves the cost of the Hartzell prop.