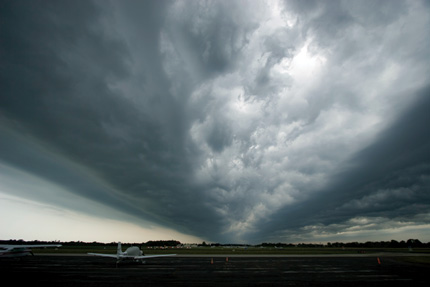 Deep, moist convection, better known as thunderstorms, are the nemesis of all aircraft, big or small. Avoidance is mandatory. Many pilots, however, continue to find themselves tangled up in these giants, and very few live to tell about it. What mistakes are these pilots making to put themselves at risk?

Education Is The First Step
There’s no question that weather impacts our flying activity more than any other single physical factor. Ironically, many aviators (even seasoned pilots) will freely admit that weather is their weakest link. A majority of newly certificated pilots possess a dearth of practical skills necessary to minimize their exposure to adverse weather. Moreover, they fail to advance their weather knowledge beyond what little they were required to learn during their private and/or instrument training.

The blame shouldn’t rest entirely on the pilot. Much of what a pilot has been taught about thunderstorms probably is worthless. A good deal of this is laced with misconceptions and, in some cases, outright nonsense. Terms like “pop-up” or “air-mass” thunderstorms are a perfect example of bad information leading pilots to believe that thunderstorms just develop randomly within a stagnant environment. Senior research meteorologist Dr. Charles Doswell III suggests that even without an important change of air mass, thunderstorms develop at a particular time and place for a reason—although it’s often difficult (and sometimes impossible) to diagnose those reasons.

There just aren’t enough educational resources (short of a formal curriculum in meteorology) available to take an average pilot beyond the basics. Pilots aren’t aware of or just don’t know how to integrate the hundreds of weather products freely available on the Internet because there are no formal educational resources explaining how to use them in the context of their flights. This is one reason I designed and built AvWxWorkshops.com as an outlet for pilots who seek that much-needed training.

Characterize That Convection
Whether you’re taking a very short trip or one that may last several hours, knowing how to “read” the environment before you depart is paramount. Pilots always are taught that flying in the morning is the best option. This is generally true, but on any given morning, it’s possible for there to be ongoing convection associated with a severe mesoscale convective system (MCS). Even when the radar image is quiet in the morning, if your flight takes you into the early afternoon hours, you’ll definitely want to paint a mental picture of what that environment might look like.

Many pilots fail to take the time to accurately describe the convective environment they may face before they depart. It requires a great deal more than just knowing there are thunderstorms in the immediate forecast somewhere along your route. Characterizing the convection and developing a sense of what’s forecast to occur will help you stay two steps ahead of it. Will it be mostly a scattered or isolated pulse-type (i.e., air-mass) area of thunderstorms? If so, will this area likely reach convective SIGMET criteria? Is the environment conducive to microbursts? Will the MCS that developed overnight persist through the morning, or will it dissipate before you depart? Will a solid line of convection form ahead of the cold front? When and where will the onset of that prefrontal convection be located? What will the direction and speed of movement be once these storms develop? Will they be severe?

Wouldn’t it be a dream come true if you were able to set the NEXRAD loop in motion and have it continue to run beyond the current time, playing out what might happen in the next six hours? That would certainly eliminate much of the convective guesswork. There’s no doubt that all pilots would love to take a peek at the future NEXRAD image. The simulated reflectivity product (www.nssl.noaa.gov/wrf/refl_loop.html) is an example of a forecast that’s the next best thing to the NEXRAD crystal ball. Simulated reflectivity is an hour-by-hour, model-based forecast that will help you visualize all aspects of the convective environment, including thunderstorm onset and dissipation, speed and direction of movement, organizational profile and intensity, just to name a few. But because it’s a model-based forecast, it’s subject to serious errors. Be sure to use this product in concert with other official NWS weather forecasts.

Flying upwind of the cell helps the pilot in several ways. First, this keeps the aircraft on the side of the tiger that has no teeth. While there can be an occasional outflow boundary down low on the upwind side, most of the time, the air is glassy smooth, especially above 10,000 feet. Second, the cell is moving away from your position or route, so any latency you might see in your satellite-based weather is magnified because what you see on your display has likely already moved away from that point. By the time you get to this position five minutes later, the cell has moved off, keeping you safely out of harm’s way. Flying on the downwind side of convection provides just the opposite effect, with latency making it difficult to judge where the convection might be in five minutes.

Choose Your Help Wisely
When down low, stay away from any visible rain shafts and stay out of the rain curtain of larger storms. If you have no onboard radar or satellite-based weather in the cockpit, enlist help from ATC. Be very careful here; pilots often take directions from ATC that may not be in their best interest. Controllers don’t see what you see. Approach control weather radar is typically fairly fresh, but controllers can’t see a building cell about to unleash its fury in the next five minutes. Also, they’re primarily concerned about how your deviation will fit in with their current traffic flow and airspace; they’re less concerned with taking you on the upwind versus downwind side of a thunderstorm. Be assertive and refuse any clearance or instruction that takes you into an area that doesn’t keep you in visual meteorological conditions in a convective environment.

The Enroute Flight Advisory Service (EFAS), better known as Flight Watch, is another outlet for pilots flying in challenging convective environments without any onboard weather. Flight Watch can be reached on 122 MHz and should be used as a strategic tool 50 or more miles from reaching the nearest convective activity. It’s not what you can see outside of your windscreen that’s the most critical; it’s the convection you can’t see that might be lurking behind it. General guidance is typically useless. Be sure Flight Watch offers a route from your present position with specific waypoints or navaids that will minimize your exposure based on the current radar and forecasts. 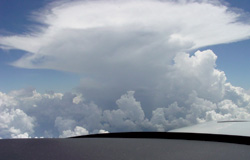 If you can’t reach Flight Watch on 122 MHz, try the High-Altitude Flight Watch frequency, designed to service pilots flying at FL180 or higher. They’d be happy to help even if you’re weaving your way around the building cumulus at a much lower altitude. Flight Watch is organized by Air Route Traffic Control Centers (ARTCCs), so each center has such a frequency. You can find these frequencies listed in the inside-back cover of the Airport/Facility Directory (A/FD).

Know When To Call It Quits
There are times when you just can’t get there from here. When pilots run out of choices, and the weather is closing in, they often make the mistake of pressing on. They’re optimistic that it’s not as bad as it looks. After all, three other aircraft made it in just fine before them. Dealing with a challenging convective situation adds to your workload. Within seconds, you can quickly get behind the airplane, missing items on the checklist, cutting corners and making mistakes in haste. Landing short of your destination is perhaps the easiest solution. Don’t pass up the opportunity to land at a perfectly good airport to make it 20 miles closer: Land and wait it out.

Gust fronts don’t show up on satellite-based weather products, and often precede the line of convection by five or more miles. Pay special attention to radar signatures such as bow echoes, which almost always contain strong straight-line winds with peak winds of 50 knots or greater at times. Winds can shift 180 degrees within a few minutes, even when the actual rain shaft is five or more miles away, forcing a tricky go-around. As you approach your destination, listen to the weather for airports upwind from your destination in the path of the storm. Heed any warnings to land and wait it out.

A convective environment is one that demands a little extra cushion. If possible, come around the backside of the weather—keep in mind that most lines of storms move to the east or southeast, while the individual cells normally move northeast. If you characterized the convection before you departed, you should know the expected movement of the weather.

Finally, pilots tend to also forget how much a deviation around the weather can eat into fuel reserves. In a convective environment, add another 30 minutes beyond your current minimum landing fuel. Once you reach that point and haven’t arrived at your destination, call it quits and find an airport where you can refuel. It’s tempting to press on, but you might find that you need one more deviation before you have a clear shot to your destination. Having more fuel will definitely obviate the need for a forced landing and reduce the pucker factor over worries about running out.

Scott C. Dennstaedt is an active CFI who specializes in aviation weather training. Visit his website at http://avwxworkshops.com. 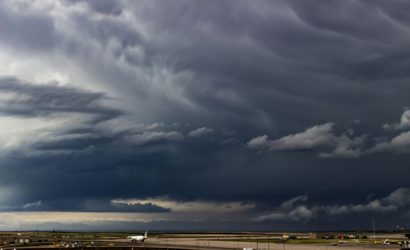