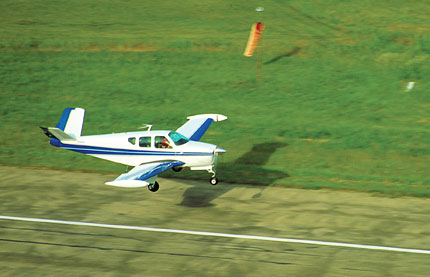 Operating at uncontrolled or non-towered airports is something we all do and probably do often enough that we get so used to what happens at our “home ’drome.” We figure that operating procedures around these airports shouldn’t be as strict as controlled airports. After all, who’s watching us and what are the chances that there will be another airplane in the pattern, especially in such a remote area?

But it’s exactly that type of complacency that causes the majority of accidents at uncontrolled airports. A quick glance at the NASA ASRS database of non-tower airport incidents shows accidents ranging from near midair collisions and ground conflicts to poor communications.

So how can you avoid being part of the statistics? Probably everyone knows what they should do at uncontrolled airports—standard traffic patterns, radio calls on the common traffic advisory frequencies (Unicom, Multicom or as published), scanning the whole airport area before taking off and so on. But do we really stick to the program and perform them correctly? By the looks of that ASRS report, probably not. So the first thing to do is to review the correct procedures for landing and taking off from an uncontrolled airport, and the best way to go about it is to take out your trusty FAR/AIM manual. Chapter 4, sections 1 and 3 are especially important when it comes to the correct procedures for operating at uncontrolled airports. As you read it, you’ll notice that there are three crucial procedures for non-towered airports: traffic patterns, visual indicators and traffic advisory.

As you’ve learned in ground school and flight school, the traffic pattern has several components: the upwind leg, crosswind leg, downwind leg, base leg, final approach and departure leg. They all combine to create the standard traffic pattern operation that can be used at single and parallel runways (see the “Key To Traffic Pattern Operations” sidebar on page 74), whether or not the airport is monitored. Performing these maneuvers at any type of airport is critical to avoiding midair collisions or other traffic-related accidents, but they become even more important at non-towered airports since there’s no one who can help you direct traffic. Also, keep in mind that traffic pattern altitudes for aircraft generally are from 600 to 1,500 feet above the ground. So pilots of en route aircraft should be constantly on the lookout for other aircraft in traffic patterns and avoid them whenever possible.

Visual indicators are another valuable factor to consider. These segmented circles were specifically designed to provide traffic pattern information at uncontrolled airports. Remember that there are several parts to this system: the segmented circle, which is placed at a spot for maximum visibility from the air and ground; the wind direction indicator, such as a wind sock, wind cone or wind tee; landing direction indicator, which is a tetrahedron that indicates the direction of landings and takeoffs; landing strip indicators, which show the alignment of landing strips; and traffic pattern indicators, which indicate the direction of turns when there’s a variation from the normal left traffic pattern. Before landing, use the indicator for the approach end of the runway, and similarly, use the indicator at the departure end of the runway, which will clearly show the direction of the turn after takeoff. 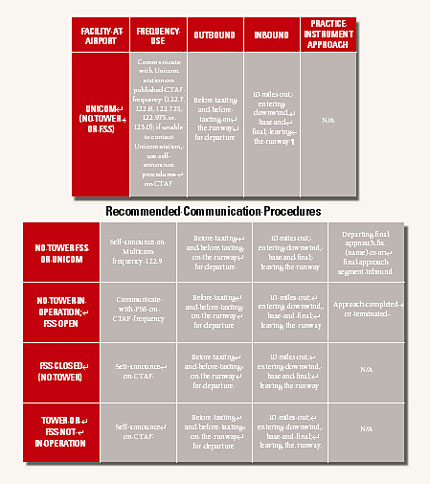 The third procedure to bear in mind is to know the recommended traffic advisory and communications practices at non-towered airports. Just because there’s no controller doesn’t mean there’s no cause to use the radios. Self-announcing, in fact, plays a big part at unmonitored airports and it can be the difference between life and death. There are several recommended communication procedures to follow (see the chart below), and it all depends on the type of airport you’re flying into. Keeping your eyes and ears on the alert at all times is your best bet at an uncontrolled airport. This is necessary because some aircraft may not have communication capability or may not communicate their intentions when flying into or out of such airports. Also, use an FSS, a Unicom operator or a self-announced broadcast to communicate your own intention and to obtain airport and traffic information.

But there’s more to flying at uncontrolled airports than FAR/AIM procedures. It’s also our responsibility to fly defensively. One can be correct and still not survive the encounter. If you see traffic, don’t assume the other pilot heard you self-announce or has seen you. Keep a wide pad of air between you and the other aircraft for maneuvering space. 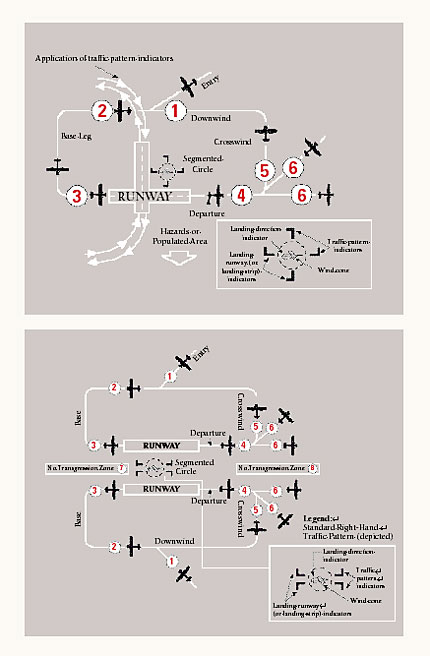 3. Complete turn to final at least ¼ mile from the runway.

4. Continue straight ahead until beyond the departure end of the runway.

5. If remaining in the traffic pattern, start to turn to the crosswind leg beyond the departure end of the runway and within 300 feet of pattern altitude.

7. Do not overshoot the final or continue on a track that will penetrate the final approach of the parallel runway.

8. Do not continue on a track that will penetrate the departure path of the parallel runway.

There also are other actions you can take to be safe at these airports:

• Review the airport information regularly. CTAFs change, aerobatic boxes come and go, and traffic patterns are altered. There’s always that 10% of the population who either haven’t heard about or checked them.

• Locate radio calls from aircraft in the pattern for their exact position.

• Scan the pattern on the other side of the airport, too. There was a fatal accident where a pilot familiar with the airport entered the pattern on a base leg opposite the normal traffic pattern and proceeded to land on an airplane that was starting its takeoff roll.

• If you have questions about non-standard operations at your airport, either ask a local flight instructor or refer to your FAR/AIM. Some non-standard ops include parachute jumping with or without a published jump zone, firefighting aircraft as well as gliders.

• If airplanes practice instrument approaches in VMC to your non-controlled airfield, very often, the final and missed approach segments don’t match the VFR traffic pattern. If you’re the one doing the practice approach, stop your descent 500 feet or so above the traffic pattern and make appropriate radio calls.

Be aware that there’s no general information, such as this article or even the FAR/AIM, that can cover every situation or location in which you might find yourself. This is why it’s essential to be familiar with the normal flow so that should circumstances require it, you can improvise as needed—safely.