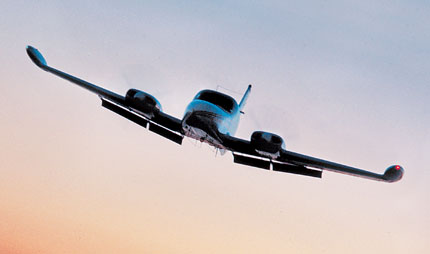 With a simple flick of a switch or a pull of a handle, pilots become empowered to instantly change the shape (and in some cases, the size) of the wings. Imagine! Altering the aerodynamics of the wing and the flight characteristics of an airplane, all while in flight. By not understanding flaps thoroughly, pilots lose the ability to take full advantage of their capabilities, and under some circumstances, it can compromise safety.

As a flight instructor, I see the routine manner in which pilots use flaps: extending or raising them based on rote procedures learned early in their training. Typically, they’ll extend the first notch (10 degrees or 15 degrees) at the beginning of the descent from pattern altitude; on the base leg, the second notch (20 degrees or 25 degrees); after turning final, the last notch comes down. These procedures may be appropriate some of the time, but definitely not all of the time, and sometimes, they can be just plain wrong.

Here’s a quick example. A pilot turns final and routinely extends full flaps. Shortly, it becomes obvious that additional power will be needed to get the airplane the rest of the way to the runway—power needed to pull against the high drag caused by the fully extended flaps. In airplane lingo, this is known as dragging it in. Except in a few situations, dragging it in doesn’t make much sense with airplanes. It’s not safe to do since it usually takes place with the airplane low and slow—and if the engine should quit along the way, it’s unlikely to make the runway.

Pilots really need to have a better understanding of the workings of the flaps. A detailed explanation would involve complicated aerodynamics explained by physics and the discoveries of Bernoulli and Newton. Being pilots and not airplane designers, we don’t need to go into that kind of detail. Instead, we’ll discuss it from a cause-and-effect perspective, which is simpler and much more comprehensible.

In spite of being relegated to that secondary status, flaps have all the aerodynamic characteristics of the primary controls—producing lift and, thus, creating the inevitable drag. Designers strive to create airplanes with airfoils that produce lift with the least possible amount of induced drag. But the drag produced by the flaps is utilized and put to important use. This is where flaps and those other airfoils part company.

Airplanes that don’t have flaps need to rely on wings with greater camber to accomplish the slower speeds needed for takeoff and landing, but wings with greater camber are an impediment when it comes to attaining faster, more efficient cruise speeds. Aircraft with flaps have the ability to convert the slim, fast wings into the slower high-lift wings that are more suitable for landings and takeoff, just with the flick of a switch or a pull of a handle (see Figure 1).

The amount of flap area (the percentage of the wing area) and degrees of flap extension as well as the different types of flaps (see the sidebar “Flap Forms” on p. 65) vary with different airplanes. The following facts, however, are generally true of most airplanes.

• In the flap-extension range up to halfway, more lift takes place proportionately than induced drag. As flaps extend beyond halfway, the reverse is true—there’s a greater increase in drag than there is increase in lift, hence the expression “putting out the barn doors.” Increased lift produced by changes in wing camber lowers stall speeds, allowing airplanes to fly slower and safely.

• The high drag generated with flaps fully extended permits pitching the nose down without gaining excessive speed. A great combination for making steep, safe obstacle-clearing approaches that would make the forward slip jealous. Using steeper approaches, even when there aren’t any obstacles that need to be cleared, has other advantages. If the engine fails during a steep approach, the airplane is in a much better position to glide safely to the runway. Also, it’s easier to judge and maintain the aim point on the runway on a steeper approach than on a shallow approach.

• Flaps increase lift dramatically without that much change in the angle of attack of the wing. It may not seem that way because when flaps are extended, a noticeable change in pitch attitude usually will follow. But that’s what it really is—a change in pitch attitude resulting from the greater downwash produced by the reconfigured wing. Those pitch changes can be trimmed away or will subside on their own. Keep in mind that the change in wing camber only takes place in that part of the wing where the flaps are, which is near the wing root—a plus, because that’s where a stall begins.

Pilots often get frustrated with their poor landings. Popular thinking is that the greater amount of flap extension, the shorter the landing. When it doesn’t happen, the reason is excessive speed entering the flare where ground effect kills off most of the drag and the wing flaps are still producing high lift. The result is known as ballooning, which often requires a quick reconfiguring of the airplane to (re)land it, not an easy task for the less experienced. 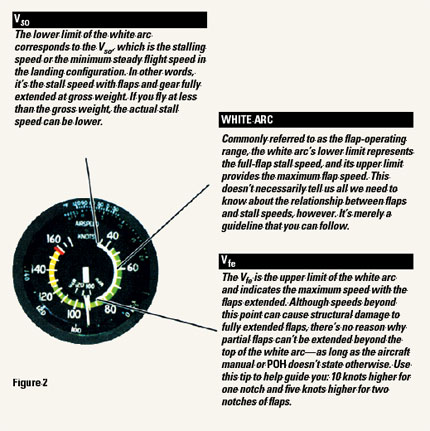 It might seem that the white arc on the airspeed indicator tells us all that we need to know about the relationship between flaps and airspeed. That’s not quite true (see Figure 2). The bottom of the white arc is the stall speed with flaps (and gear) fully extended at gross weight. If flying at less than gross weight, as we mostly do, the actual stall speed can be lower.

At the other end of that white arc is the maximum speed for full-flap extension. Speeds beyond this can cause structural damage to fully extended flaps. There’s no reason, however, why partial flaps can’t be extended beyond the top of the white arc (unless the aircraft manual or POH states otherwise). A rule of thumb is 10 knots higher for one notch and five knots for two notches of flaps.

One of the more spectacular uses of flaps—popping the flaps—is practiced by bush pilots. It’s used where runways are short, obstacles are in the departure path, runway surfaces are unimproved and early liftoff is needed. With brakes on and full power, the pilot releases the brakes and, without any flaps, accelerates down the runway, trying to keep the airplane as aerodynamically clean as possible—minimal aileron, rudder and elevator—to achieve the quickest or earliest indications of lift. Then the pilot puts in the amount of flaps appropriate for the conditions, and the airplane “pops” into the air. Other pilots shouldn’t try this on their own unless accompanied by an instructor or a pilot who is experienced in this procedure.

For the rest of us, the most crucial procedure concerning the use of flaps is when we need to abort a landing when we’re close to the runway surface. Much of the instruction on this procedure tends to oversimplify with the advice to retract one notch of flaps as soon as full power has been applied. This rote thinking doesn’t take into consideration how far the airplane is in the landing phase. If the airplane is into the flare with the airspeed dissipating, the power should be advanced at once, but don’t touch the flaps. The airplane should then be pitched to a level attitude, which will allow some airspeed to build up. Once climb speed is reached and the climb is initiated, one notch of flaps can be safely taken out.

There are pilots who are required to fly circling close to the surface, such as search and rescue, and animal trackers. These pilots usually will have a notch or two of flaps.

In essence, a rule of thumb that pilots should keep in mind is that flaps extended up to halfway is primarily for the purpose of gaining additional lift. Extending flaps beyond halfway is to take advantage of the increased drag. And both cases benefit from the lowering of the stall speed, thus allowing airplanes to fly safely at slower airspeeds.