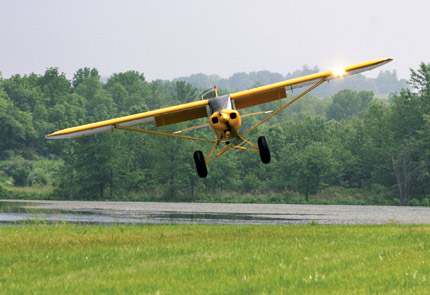 There aren’t many mechanical contrivances that are more reliable than an aircraft engine. At the same time, there aren’t too many mechanical contrivances upon which our physical well-being is so clearly dependent. The good news is that engine failures almost never happen. The operative word being “almost,” it has to happen only once to ruin your day. If you keep your wits about you, however, and you plan for the possibility of an engine failure, you greatly increase the probability that you’ll survive the unscheduled reunion of airplane with earth.

The foregoing comment about surviving an engine failure assumes that several concise guidelines will be followed:

• First, and most important, you must keep your head and continue to fly the airplane rather than giving into the little voice inside your brain that’s screaming, “Get this thing on the ground right now, at any cost.”

• To cope with a power failure, you need to plan for it every single second that you’re airborne. Don’t wait for it to happen to start thinking about it.

• Study the various systems in the airplane so you understand their operation. This gives you a better chance of diagnosing the problem and getting the engine restarted.

• At least a little of your preflight planning should include a “postcrash” survival section. Plan for the worst-case scenario and be prepared to survive afterward. It would be a bummer to survive an off-field landing on a winter day only to perish because you had nothing but a Hawaiian shirt to protect you.

Preplanning for emergencies can’t be overemphasized. In most cases, the planning and training is all that keeps an emergency from becoming a disaster. It’s a wildly stressful situation, and you can’t depend on your brain to think your way out of it. Training makes up for your inability to think.

Training and practicing for an engine failure instills instincts that don’t require logical thought to respond correctly. That being the case, let’s examine the most likely emergency scenarios in the different flight regimes (takeoff, cruise, etc.), and develop a series of procedures to be physically practiced and mentally considered every time we strap in.

Engine Problems On Takeoff
The three most important factors regarding an engine problem on takeoff are: 1) how high and how fast you’re going when it happens; 2) how complete the power loss is; 3) how much runway is still in front of you, if any.

Altitude and speed are everything in a takeoff emergency because they drive many of your decisions from that point on. Only on the rare occasion when there’s plenty of altitude and absolutely no doubt that you can make the turn, however, should you even think about turning back. It’s far better to orchestrate a good landing off field than to botch a turn back to the airport and hit the ground in an uncontrolled manner.

Here are some basic rules for an engine out on takeoff:

1. Get the nose down immediately to maintain glide speed.

2. If there’s even a little runway ahead, slip hard and go for it. It’s far better to roll off the end of a runway than to land off airport.

3. Once you have the airplane (and your wits) under control, change tanks and make sure the boost pump is on. Close the throttle and reopen it to give the engine a chance to restart (it’ll be windmilling). If it doesn’t start, and you have the time, move the fuel valve to “off,” but maintain airspeed and don’t take your eyes off the windshield.

4. If going off-airport, don’t try to stretch your glide, which is always tempting. Maintain flying speed and control right into ground effect and make as normal a landing as possible, considering the circumstances.

On every takeoff, always assume the engine is going to quit. At your home airport, pick a number of possible landing spots off the runway, straight ahead and off to the sides. If you’re taking off from a strange airport, as soon as you have enough altitude to see what lies off the end of the runway, find some friendly looking streets or fields to land on in case the engine quits.

In an effort to develop an emergency-ready mindset, let’s do a little mental exercise: at various times during every takeoff say to yourself, “If it quits right now, I’m going to put it there,” then pick out a spot. As the altitude increases, you keep asking the same question and pick different spots. After a while, you’ll do this so often that it becomes a habit to look for places to go; so, if things really do get quiet, you’ll be ahead of the game.

Another game is to climb to altitude and do simulated engine failures and see how far you can turn from different altitudes. At an even altitude, say 2,000 feet, slow the airplane to near stall and initiate a takeoff climb. Go up varying distances, say, 300 feet, then 500 feet, 800 feet, etc., and kill the power at each. Then make a left or right turn while holding glide speed to see how much of a turn you can make before you hit your original altitude. It’ll teach you a lot about your airplane and your options at various altitudes.

En Route Failures
The specter of an engine failure hangs over every cross-country flight. Or at least it should. But it shouldn’t be a burden, just something to be considered and planned for.

The most obvious piece of planning is that every instant you’re in the air, part of your sightseeing should include “there’s one I can land on” thoughts (you literally fly from one emergency field to the next). Since you have altitude, your options are good and you can select fields or roads on either side and even behind you. Just keep track of them, and, as you pass one, find another up ahead.

If you have a choice between two equal sites and one is close to houses or roads and the other more remote, pick the one that’s closest to civilization: if you have to go down, try to do it with spectators who can help you.

When you identify possible landing sites, you should also develop a mental plan on how you’re going to approach them. Identify which direction the wind is blowing (dust, flags, water, etc.) and which direction you’ll approach. Then figure out how many turns or circles you’ll have to make (you do know how much altitude your airplane loses in a gliding 360-degree turn, don’t you?) to put yourself over the middle of the improvised runway with at least 500 to 1,000 feet of extra altitude. Once you’ve positively identified which direction the wind is blowing, you’ll have the option of turning either direction to set up an approach at your usual AGL altitude. This assumes you were cruising along high enough above the terrain that you have the altitude to make those kinds of decisions. Although flying along at a thousand feet is much better for sightseeing, if the engine quits, you have very little time and few options available.

Incidentally, this is when making power-off landings a part of your normal flying pays off. If you habitually make power-on landings, you’re basically on a test flight when the engine quits because you won’t know how far your airplane will glide or the actual effect of configuration changes. Using just a little power on an airplane greatly changes the glideslope and prevents you from developing references for power-off landings. Making power-off landings once in a while is good practice and could save your bacon somewhere down the road.

The goal is to make the emergency approach as close to normal as the situation will allow. Don’t let adrenaline talk you into doing something drastically different. This means flying a normal downwind, but with a slightly tighter base leg to guarantee that you’ll make it. For that reason, use a point about halfway down the field as your reference point. This offers the option of slipping to put the airplane closer to the end of the touchdown area and lets you drop over any obstacles. This is another area where the knowledge gained from making power-off landings and utilizing slips to fine-tune the touchdown point becomes a lifesaving skill.

Don’t try to put the airplane right on the end of the selected touchdown area for one simple reason: It’s far better to roll off the other end of a field at 10 to 15 mph than to land 20 feet short simply because you misjudged something or a gust dropped you.

There are about a million nuances we’ve had to skip over in this little discourse, but hopefully, we’ve hit all the high spots. However, if there’s one thought that you should remember about the subject, it’s that engine failures can, and do, happen and there’s simply no substitute for planning and practice.