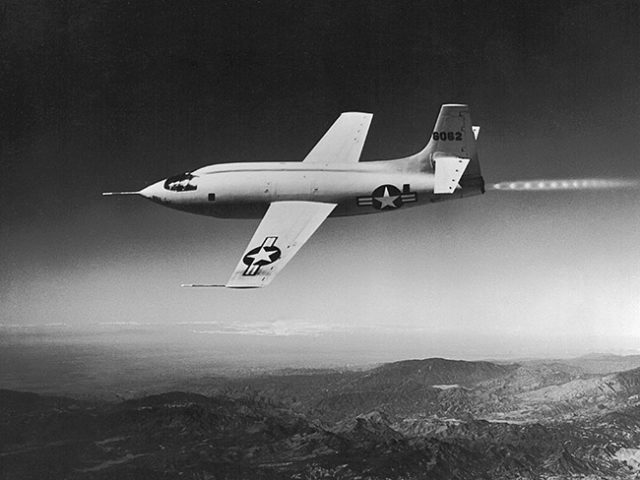 Was Chuck Yeager the first to break the so-called “sound barrier?” Or did someone, or multiple people, beat him to the sonic boom?

Well, this one isn’t so much a mystery as a debate.

For the past seven-plus decades, we’ve celebrated Chuck Yeager’s being the first human to fly faster than the speed of sound. The feat we fete is his flight on October 14, 1947, in the Bell-X-1 rocket plane. The X-1. The straight-wing rocket plane was carried aloft by a B-29 mother ship and dropped from its bomb bay. The plane accelerated up to Mach 1.07 (a “Mach number” being the speed value used for very fast aircraft) in level flight, and Yeager had achieved the first supersonic flight.

Or did he? There are numerous theories that other pilots beat him to the sonic boom party, some by years, another by mere days.

But did they? Before we launch into a list of fast-but-how-fast alternate answers to the Yeager story, a quick discussion of the physics behind really fast flight.

Any aircraft will start to experience the effects of what is known as compressibility at speeds approach Mach .85 up through just over Mach 1. Compressibility is a suite of properties of the air negatively affecting the performance and controllability of a craft as it approaches the speed of sound. In particular, wave drag, which is the effect of the formation of shock waves due to compressibility, greatly increases the power required for an aircraft to accelerate through high subsonic speeds and just past Mach 1. This is known as the “transonic” realm, and it is the speed range that causes early supersonic contenders trouble, both in having enough power to push through the effects of compressibility and in allowing the pilot to maintain control of the plane. In many cases, pilots lost their lives as they found themselves in very high speed flight and unable to control the plane due to the effects of compressibility rendering their flight controls, particularly the elevator, ineffective.

These effects are bad for survival and good as a way of detecting a plane’s presence in the transonic realm. A plane’s flight controls aren’t going to become unresponsive at Mach .60. But at Mach .90, unless the plane is designed for it, they’re almost certainly going to jam up. Moreover, as the center of lift moves back due to the shock waves, the nose drops, an effect known as Mach tuck. And with limited or no elevator authority, it can be unrecoverable, too.

Another important detail to note is that conventional airspeed instruments become unreliable when they enter the effects of compressibility. In fact, they tend to read fast due to the seeming increased air density, an effect known as Mach jump.

Piston-powered, propeller driven WWII fighters: Never happened. For one thing, these planes couldn’t outrun a Messerschmitt Me 262 jet in a steep dive at full power. How were they going to break the speed of sound when they’re slower than a plane that never did it itself? And remember the thing about airspeed indicators. And the fact that they had propellers, which are limited by tip speed limitations to subsonic speeds, seals the case. In fact the fastest prop driven plane ever is a Soviet twin-engine turboprop, and it’s a low-Mach .7 airplane.

Messerschmitt Me-262: During WWII the first operational jet and deadliest fighter plane might have attained supersonic speed in a steep dive at full power. The pilot, Hans Guido Mutke, claimed to have experienced the buffeting associated with high subsonic speed and then the calm after having passed Mach 1. His plane even suffered structural damage, purportedly from the buffeting.

Messerschmitt Komet 163: There are reports of this small rocket plane besting the speed of sound, but they are unconfirmed, and Messerschmitt never made the claim for the jet. Beside, the Me 163 wasn’t designed for high-subsonic flight, so some content that even its official top speed of about Mach .95 needs to be taken with a grain of salt.

XP-86: Another testbed, the North American XP-86 was a swept wing fighter that was being flight tested by test pilot and former WWI ace George Welch, who claimed that he had shortly before Yeager’s X-1 recording breaker himself broken the sound barrier in the XP-86 in a steep dive at high power form high altitude. There were anecdotal reports of personnel on the ground hearing a sonic boom. North American’s own data from those flights seems to dispute Welch’s claims, but there remain proponents of Welch being the first to hit Mach 1.

Chuck Yeager in the Bell X-1 was the first human to fly a plane faster than the speed of sound. Not only was the record achieved with accurate airspeed measurements, in level flight and with recording data, but the feat was recreated and even bettered multiple times shortly after Yeager’s flight. Might someone before Yeager’s jaunt done the deed in a steep dive? It’s possible, but unlikely. And did anyone surpass Mach 1 in level flight before Yeager? The answer to that is, no way.