I sat on the ramp in my Extra 260 in Tehachapi, holding short of Runway 08, when my fuel tank imploded. While taxiing out, I decided to transfer fuel from my rear auxiliary fuel tank to my main aux tank. I might need the fuel and couldn’t burn right from the rear aux tank; it had to be transferred first. I switched the fuel valve, hit the boost pump, and started to time it so it transferred enough but not too much.

I must have been distracted, transferring more fuel than the tank could take, when I noticed the fuel door start to expand and “puff up.” I immediately shut off the boost pump, shut the engine down, got out and looked at the tank. It seemed kind of “swollen,” but no fuel was leaking and everything seemed okay, so I took off for my next fuel stop to the west and closer to home in Tucson.

When I inspected the fuel tank at my next stop, it had collapsed and was kind of wrinkled, something that must have happened when I burned off some of the fuel. I suppose that is when I started thinking about fuel vents. If there had been a vent, the tank wouldn’t have expanded and collapsed—so obvious. I flew the airplane for another year with a wrinkled tank, and it didn’t seem worse for the wear, but after that I was very careful when transferring fuel. 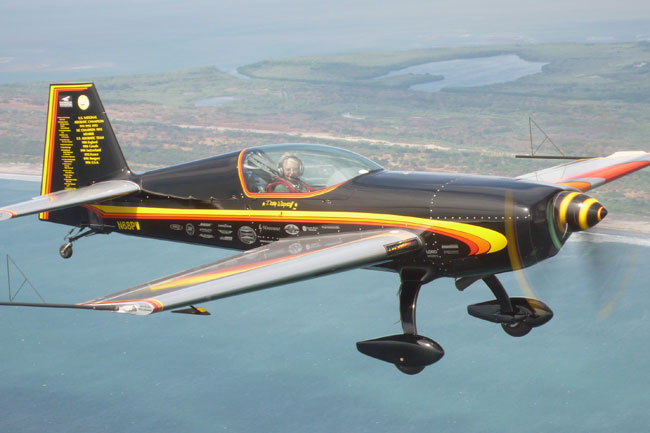 When I started flying, I didn’t know the difference between a piston and a cylinder, and frankly didn’t care. I just wanted to fly. But having to deal with maintenance shops and things that came up on the road taught me to be more attuned to what the engine actually did other than just suck and blow. Understandings things like how to pump up my own brakes, how to safety wire a loose cotter pin, and about things like fuel vents, for example, taught me a lot about what was truly airworthy and what wasn’t, which kept me from getting stranded in no man’s land more than once.

Fuel tank venting isn’t difficult to understand. The vent exists so the tank can breathe; so when you overfill the tank, it has a place where the air and fuel can escape. Venting is also important when the airplane climbs and descends, as air pressure is altered by atmospheric changes. Fuel expands in volume as it warms up and shrinks in volume as it cools down. The fuel level in your tanks changes throughout the day, even if you’re not flying the airplane.

Your tank has to breathe, so it must have a vent that relieves both vacuum and pressure.

The vacuum exists because as fuel is sucked out of a tank to feed the engine, it must be replaced by something—air. You can’t put fuel in your tank unless you can get the air out; you can’t withdraw fuel unless you can let air in.

If the vents become blocked in flight, let’s say at the point when the tank contains 50 percent fuel and 50 percent air, fuel will continue to be sucked out but the existing air must expand to fill an ever-greater volume. This causes a drop in pressure—or if, you prefer, a partial vacuum compared to outside pressure. Either way, eventually the fuel will stop flowing or the tank will collapse in on itself, implode.

Sometimes a venting problem is hard to diagnose. I was flying my B-55 Baron from Florida to Portland, Oregon. A friend and I had stopped in Tucson to visit a friend who lived on an airpark. After landing, I carefully tied the airplane down, and put on its canopy cover and pitot cover. A couple of days later, we took off via I-10 and then headed north on the east side of the Sierras in California.

As we were flying north, I noticed the normally rock-solid fuel gauge on the right engine was fluctuating. The Baron’s fuel system had a cross-feed feature, and I played with it while trying to figure out what was going on, but it kept fluctuating, so I landed and spoke to a mechanic. After uncowling the engine, he discovered a broken fuel line. So that’s why. The engines were low time and the hoses were fresh, so we couldn’t imagine why this had happened, but “these things happen,” so we went to lunch while he fixed it, then took off again toward the north.

And then it happened again—this time over more remote territory with fewer airports. Nervously watching the fluctuating fuel flow, I was happy to get on the ground at Klamath Falls, Oregon. As my friend and I were standing there shaking our heads and wondering why we would have blown another fuel line, an old-timer came walking out of the little FBO. He asked what was going on, and I told him.

He didn’t say anything, just nodded his head and walked over to the airplane and pulled a big mud dauber nest out of a fuel vent, handed it to me and walked silently back into the office. The big lesson here isn’t not knowing about the danger of mud daubers (even though I’d heard about them). They weren’t obvious to me on a pre-flight. The lesson was that even though they found the broken fuel line, we didn’t figure out what caused the broken fuel line. I guess that is what experience is made of.

Fuel vent problems are nothing new. On October 24, 1947, a United Airlines DC-6 was flying over Bryce Canon, Utah, when it exploded. The report on Flight 608 said:

While transferring fuel from one tank to another, the crew allowed fuel to overfill and overflow out the vent. A design flaw allowed the gasoline to be carried back in the slipstream to the cabin heater combustion air intake scoop. When the cabin heater came on, an explosion and fire destroyed the plane killing all 53 aboard.

You can learn a lot about aerodynamics and fuel systems from Experimental-certified aircraft. We owe a lot to pioneers like the Wright Brothers and Glenn Curtiss, WWII airplane manufacturers, homebuilders, test pilots and, of course, aerobatic pilots.

A friend who flies a Cassutt Racer told me about fuel venting issues he’s heard about on two different racers. The Cassutt has its fuel tank located in front of the cockpit, above the pilot’s knees. The easiest solution for a tank vent is to stick a small pipe up through the top of the tank. The one concept overlooked with this design is that at lower speeds there is a low pressure area in front of the windshield. This low pressure is stronger than the gravity feed to the carburetor, and after slowing to approach speed for a half minute or so, the engine would quit, as you can imagine.

He says, “It’s quite exciting when doing touch-and-goes, which turned into touch-and-go—when the engine quits, landing with a dead-stick prop. The vent line was redirected down the gear leg, and the problem was resolved.” He goes on to say another such venting issue occurred where the Cassutt wouldn’t run at anything above quarter power in flight. The culprit was the vent line broke at the front of the fuel tank, venting the tank to the inside of the airplane, which is also in a low-pressure area, interrupting the gravity feed of the fuel.

Of course, it’s not just Experimentals and 1947 DC-6s that have fuel venting problems. A problem can happen in any airplane whenever a fuel vent is bent, inadvertently misdirected or mounted wrong, or gets clogged. There is more than once accident like this:

The National Transportation Safety Board determines the probable cause(s) of this accident as follows: The pilot’s reconfiguration of the fuel venting system, which resulted in a loss of engine power and subsequent loss of aircraft control.

When a Cessna 172 made two off-airport landings due to engine roughness and power loss, the NTSB determined the probable cause of the accident was the restricted vented fuel cap and obstructed fuel vent lines, which resulted in a total loss of engine power due to fuel starvation.

And the list goes on. Venting—a boring subject, perhaps. But I’m also fascinated by it because my life depends on it. That’s one reason to get your attention.

Moral of this story is:

Don’t mess with your fuel vents.

Check your fuel vent system after an annual.