At the risk of spoiling the fun for you, I’m about to talk about the latest Star Wars film, The Force Awakens, as well as another less well known film about flying. In case you’ve been off scavenging star cruiser parts on Jakku for the past few weeks, let me warn you now that I’m about to reveal big surprises. Harrison Ford is in the movie. Okay, that’s not much of a secret, and it’s also absolutely no surprise that in it Ford reprises the role of Han Solo, skilled pilot of the Millennium Falcon. Ford, as you probably also know, is a real pilot in the real world in real airplanes.

I saw the film for the first time just last night, and while I haven’t had the chance yet to ask Ford what role he played in the technical aviation side of the film, something tells me, it was an important one.

Without giving away actual spoilers, I will say that the flying and the politics of the cockpits in the Millennium Falcon (big shocker, it’s back) and a number of other starcraft ring true. One thing they got right was who gets the left seat as opposed to the right (even in a galaxy far, far away and a long time ago, the captain got the left seat. . . nice to know where that tradition came from…and if the captain needs a relief pilot, well then that’s a bit more complicated. The flying part comes off just as credibly. The decisions that the pilots make, how they talk about the ship and even how they manage crises, of which there are many . . . it all just works. 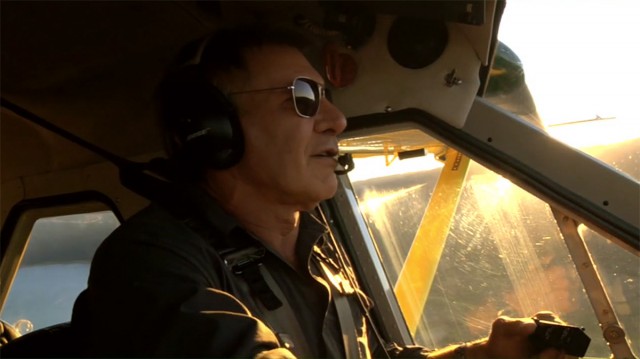 The whole flying element feels as though it was written, or at least rewritten, by someone who knew a thing or two about crew resource management and the way a jet flight deck operates. Sure there’s a lot of hyper space speeding about– how many times have I been halfway between here and El Paso dreaming of just such a lever!—and there’s a lot of high-speed maneuvering that would likely pull 25 Earth G’s–but the overall feel of the flying is just right. Score one for Disney here.

For some actual real world Harrison Ford, check out this short film he headlined for the Wings Over the Rockies organization. The film, which features some of the most gorgeous flying footage you’re likely to see this year, also has the best theme imaginable—flying is awesome, so let’s go do it.

Funny thing. I got that same message from Star Wars. . . back in 1977 and just the other night too. Time for me to go flying. Now, how do I bypass the oscillator again?

Watch the Harrison Ford Wings over the Rockies Film.