This week’s Plane & Pilot Photo of The Week is not actually a photo, but a drawing by Andrea McDonald of aviation pioneer Bessie Coleman, the first Black woman pilot in America. McDonald, in addition to being a talented artist, is a freshly minted Private Pilot, one who has a keen interest in aviation history. And seeing that it’s Black History Month, she thought it the perfect time for a tribute to Bessie Coleman. We couldn’t agree more.

If you look closely, you’ll see that McDonald has an unusual approach to her drawings. Each one in this series is created using as the pencil stroke a single word, sometimes drawn large, sometimes very small, a word that she believes captures the essence of the subject. In this case, McDonald went off a quote from Coleman, who once said, in recognizing the challenges a young Black woman faced in becoming a pilot in the early part of the 20th century, “I decided to try. I tried and I was successful.”

The story is even more resonant when one knows the story of Bessie Coleman. Born in 1892 in a rural area of Texas, Coleman was a gifted math student. After working in the cotton fields in Texas for a time, when she was 23 she moved to Chicago at some point deciding to become a pilot, something that was exceedingly rare for women, who were still a couple of decades away from being granted the vote, but even more for Black women, whose challenges were far greater, even. It seemed a futile dream. American flight schools at the time didn’t train women or people of color—Coleman was Black and Native American. But after improbably finding a champion for her aviation ambition, she moved to France, where she trained and successfully got her license at the age of 28.

Coleman flew airshows and demonstrations for several years after. She was killed in 1926 at the age of 34 when she was ejected from the unbelted back seat of an airplane that crashed, killing the pilot, shortly thereafter.

In getting her pilot’s license, Coleman became the first Black woman pilot in the United States, and the first Native American pilot, as well. And she has served as an inspiration to pilots everywhere ever since, and her admonition to “try” captures the essence of life that was lived in the sky only because against all odds she dared to give it a go.

Here’s another great drawing McDonald did of another American Pioneer, Amelia Earhart. As you can see, the word McDonald used to draw her was 99’s, the organization for woman who fly, founded in 1929 and of which Earhart was the first president. 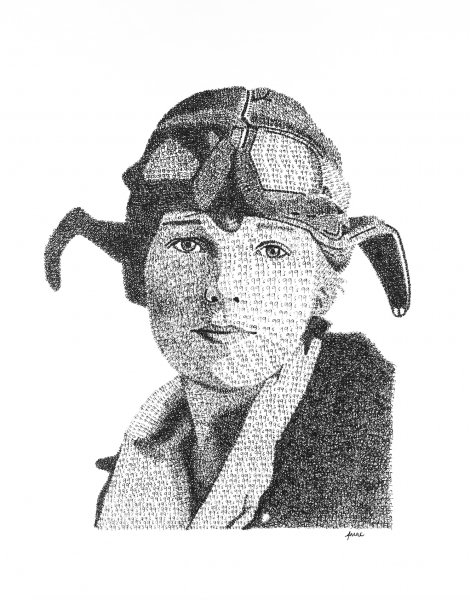 If you like her work as much as we do, check out Andrea McDonald’s Etsy Shop, StudioAmac.