On opening day of Sun ’n Fun 2021, when SNF president John Leenhouts explained the protocols for the exhibit buildings—the most problematic spaces on the field as far as enforcing social distancing—he said something that got my attention. And not only me. The plan, he explained, was to require a mask for entry, and after that it would be between the exhibitors and the attendees how they wanted to handle things. So in other words, Sun ’n Fun was enforcing the wearing of masks for the 10 ten feet that the attendee needed to cover in order to enter the building before slipping it off again, if that’s what they wanted to do. It’s a rule that sure seems created in order for it not to work.

And sure enough, it didn’t. One of the things I was intrigued about with this show, in addition to seeing how many people showed up—I did—was finding out just how the organizers would handle the wearing of masks both in the exhibition halls and on the field. 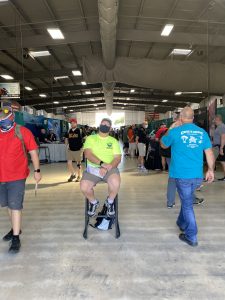 The latter seemed a non-issue, especially given the light attendance of Day One. There was plenty of room out there today. How that will shake up with the Blues show later this week, bringing with them the crowds they always do, remains to be seen. But recommended-but-not-required mask wearing outside, with lots of space and people able to create their own spacing, seems totally workable at this point.

The exhibit halls? Not so much. In fact, the original plan, of requiring masks to get in, seemed to be abandoned early on. In a couple of locations that I stopped by today, no one was really checking. By the middle of the day, the volunteers manning the entrances were clearly not keeping track, and who’s to blame them? Who wants to be in the middle of a confrontation, as we’ve seen repeatedly on the news these past months, between an entry-level employee and an angry customer who’s not going to be wearing a mask and is more than ready to debate the subject loudly? Not me!

And the halls filled up pretty good by the end of the day, too. It was hot outside and shady in the buildings, and lots of folks made their way inside. Great! Except, that too was supposed to have been controlled. If it were being monitored in any way by any Sun ’n Fun personnel, I missed seeing any sign of it.

I can’t really blame Sun ’n Fun for not doing a better job of enforcing the wearing of masks inside the halls, or for not limiting the numbers of people inside, either. Their customers want to go in and their exhibitors want to those customers to come in. And Florida has no hard-and-fast rules about such things, so Sun ’n Fun made some that sounded good, and when they didn’t work, which must not have surprised them very much, they let them not work.

Pretty much no one seemed to care. Is it a good thing? What, large indoor gatherings in tight quarters with most of the folks not wearing masks? Of course, it’s a terrible idea. But people are so sick of this pandemic that things are getting back to normal even in advance of the risk level being low

And, yes, I know that there were a lot of people in those halls who, like me, have gotten their vaccinations. But there’s no way of knowing who has and who, for whatever reasons, hasn’t. The level of risk just had to be much lower than it used to be. Way lower. I hope it plays out that way, and no one gets sick. But then again, there’s no way of knowing if that happens or not. It’s not like the CDC is planning to do case tracking of Sun ’n Fun attendees. I just hope those people who needed to be careful have been and that those people who weren’t careful and should have been don’t get sick.

I, for one, am so delighted to have come to this show. But we’re not all the way back yet, and pretending that we are might make us feel better, but believe me, the virus just doesn’t care.