Ever considered building a Super Cub in a week? The young folks at the Lakeland Aero Club are on it. The youth program on site at Lakeland Linder Regional Airport is assembling a Patriot Aircraft Recruit trainer in their hangar this week, having started with uncrating a kit. They plan to have it framed up and ready to cover before the event is complete.

The Lakeland Aero Club is a donation-funded high school flight club that gives tomorrow’s aviators a chance to experience a broader range of activities than just showing up and going flying. This week’s experience building the PA-18R Recruit trainer will be handy as it will become one of the club’s trainers once it takes flight.

“These kids are awesome,” said Don Wade, who was on-site with his brother, Ron, to give a helping hand. “They’re so attentive and engaged!”

The Wade family—Don and his wife, Cathy, Ron and his wife Janette, launched Patriot Aircraft in Bessemer, Alabama. The Recruit trainer under construction in Lakeland is similar to the original Piper Super Cub, the PA-18-95, a lightweight, lower-powered ancestor to the higher-powered Cub descendants available today. The Recruit has no flaps, a 14-rib wing, a redesigned spar and a 118 hp engine coupled with the Sensenich ground adjustable propeller. With an eye on the scales, builders can finish the Recruit with an 870 to 900-pound empty weight, which works out to sprightly performer—Wade claims a 1,000 fpm climb rate.

The Recruit is powered by a Don’s Dream Machines 201-cubic inch experimental motor, which is similar to a Continental O-200, with a few touches like modified timing, and the cylinders are ported and polished to give it a little more kick. The entire engine is assembled from Continental factory parts. And if you wonder, yes, it’s the same Don. His other business is an engine shop specializing in small Continental engines up to the O-300. 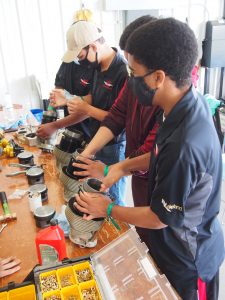 The fuselage is four inches wider than the original Super Cub; a sliding front seat and adjustable rear seat make the airplane a much cozier place to train than the original. The overhead trim control is an easy reach for either seat with no awkward bumping of the front-seater that came with the sidewall-mounted trim that Piper engineered. Large side windows and skylights will enhance visibility for both seats.

The wings were finished quickly, and the students were routing cables, pulleys and installing floorboards Thursday morning. At a nearby table, four students each had a cylinder as they gapped piston rings for the engine—which they’re also building from bare bones.

Once the students at the Lakeland Aero Club finish up for the week, they’ll load the Recruit on a truck back to Bessemer where it will be covered and painted at the factory, and then students from the Aero Club will head north to fly its 40-hour test time off before heading to Oshkosh with it, to join the company’s first aircraft. After the show, serial number one will leave in the care of whoever wins the Great Aircraft Raffle, and the second one will return to Lakeland to take up a new role by training students at the Aero Club.