As the last lights of Texas slid beneath the wings and Arkansas loomed ahead, I eased the power off and let the Mooney begin a gradual descent toward my next stop. With apologies and a little artistic license applied to a popular presidential quote from the 1990s, I believed in a fuel stop in a place called Hope, Arkansas, the birthplace of former president Bill Clinton. The airport was marked as unattended, with 24-hour self-serve fuel available. I figured it’d make a good quick stop to fuel, hit the restroom, stretch and make the last three-hour flight of a long cross-country flight.

My friend Grayson had bought a 1967 Mooney M20F, and I sort of share the blame in that decision. He’s a pilot at my airline and had longed to get back into general aviation. When I paid a visit to his farm in my Mooney, he started asking questions and sending me advertisements with questions. How about this one? What should I look for?

After a few false starts, Grayson found a promising bird in Arizona, hangared at Deer Valley Airport, which I’m told has leapfrogged Van Nuys, depending on the statistics you use, as the busiest general aviation airport in the United States of America. He bought the airplane, sight unseen, after talking with the broker and getting the results of a pre-purchase inspection.  On paper, it seemed like a fine bird, although its original paint and dated panel could use some attention. Then work piled up, and Grayson couldn’t get to Arizona to bring it home.

Meanwhile, I had bid a month off from the airline to knock out some projects, and, seeing an opportunity for a distraction, I offered to bring the airplane east. I had just begun installing an engine monitor, and, with my airplane in pieces, the chance for a long flight was too hard to resist.

Friends, if you’re flying general aviation around Phoenix, my hat is off to you. That’s some of the most complex airspace I’ve navigated, and the air was thick with aluminum specks all trying to pick through the same routes over and around the class D airports beneath the Class B airspace. Hem it all in with a mountain range on the east side, throw in a weak comm radio, and it was one of the most challenging departures in my years of flying.

I’d climbed to 9,500 before I even thought of leaning. A quick mag check showed the right magneto was running rough, and the most aggressive leaning couldn’t remedy it. I landed just before sunset in Las Cruces, New Mexico, and the next morning I cleaned the two spark plugs that I suspected while standing out on the ramp. The runup was better but not great, and a quick hop to El Paso found a shop that was open and could help me out.

The crew at El Paso Aero tested the spark plug leads I suspected and found they were fine. They found other spark plugs that were heavily eroded, and after a thorough cleaning and re-gapping, I was on my way home with a perfect mag check.

My longest flight in a single-engine airplane followed, as I crossed all of Texas in a single bound, aided by a slight tailwind, and found myself on the ground in Hope. But there, my ambitions were dashed. As I pumped fuel, I noticed frost was quickly forming across the wings. While I’d been careful to note that the dewpoint was a bit lower than the sub-freezing temperatures there, I’d failed to account for the fact that the Mooney and I had been hanging out at 9,500 feet, where the air was much cooler than the dewpoint on the ground.

The cold-soaked aluminum was well below the dewpoint and looked like a grade-school science project demonstrating condensation, sublimation and deposition. So, my chariot turned into a pumpkin—or, rather, a popsicle. It was late at night, and I hoped to launch soon after the sun rose, a winter weather system close on my heels. I didn’t see much need to engage the local taxi or hotel when I’d be back out the door in a matter of hours, especially since the FBO was unattended, and there were a couple of very comfortable recliners in the back room.

In addition to being a presidential birthplace, Hope was home to an ammunition proving ground in World War II, and there is an impressive display in the FBO building. When I stepped inside, a familiar smell hit me—and I have no clue what it is, but it is the exact same smell that permeated a friend’s house where we built model airplanes when I was a kid. It made me feel at home as I floated around the rooms, inspecting the wall of solo shirttails that went back more than 20 years.

A wall-mounted planning chart with a string anchored for distance measuring and a sticker in a door’s window glass touting the 1994 AOPA drive for product liability reform to revitalize general aviation were throwbacks to the sorts of FBOs I grew up in. The vending machine took 85 cents of pocket change and gave me a bag of microwave popcorn, and another 80 cents got me a can of Dr. Pepper to wash it down. The lack of company meant I had nobody to apologize to for the horrible smell as I popped the butter-flavored dinner. All I needed was an energetic group of aviators telling tales in the couches around me to really fire up the time machine.

The recliners were up against some 1940s-era single-pane windows, and to fight the chill, I bundled up in an airline uniform sweater I’d dug from the bottom of my suitcase and used my jacket as a blanket as I drifted off to sleep.

Around midnight, a previously unnoticed base station radio crackled to life as a feminine voice announced that a Stationair was inbound to land. Wait, was that call for…here? My mind boggled. Nah, that had to be for somewhere else. I closed my eyes, and then they reported themselves to be on short final, and, sure enough, a collection of lights flashed across the window, then reappeared as they taxied to the fuel pumps. I heard a group of voices approaching and prepared myself for company. It turns out that the six-seat Cessna 206 had been mostly full of folks—a bunch of ladies and one guy, all pilots, who had been out enjoying the evening.

They’d landed to drop off a friend or two, and as they waited on their ride to arrive, they filled into the chairs and couches around me. They told me some of the history about the field that the historical displays had failed to mention, and we traded stories about trips we’d made, each of us comparing notes on our recent trips to Kitty Hawk, North Carolina.

“Wait, why are you camping out here? You could get a taxi into town,” one of the ladies asked. I explained about the frost demonstration on the Mooney, which I’d moved over right in front of the picture window, and how I hoped to be on my way in just a few hours. Luckily, they had been flying down low, and their wings remained clean. The friend’s ride showed up, and the rest of the group bundled up to board the plane and return to their home base, a short hop away in Magnolia.

As they walked across the ramp, I heard a few words of a conversation. “You know, we really should…” and the rest was lost. Moments later, one of the ladies bounded back inside and gave me her phone number. “If you wake up and get weathered in, we can get you into a hangar, or if something breaks, we know all the local mechanics and inspectors. We won’t let you get stranded here.” I shot her a text message, and she replied with the phone numbers for most everyone in the group. The gabfest, camaraderie and looking out for each other was an absolute shot in the arm, and I drifted off to sleep having enjoyed the visit.

I woke just before sunrise and spent several chilly minutes wiping away most of the accumulated frost with a dirty undershirt, then pulled the Mooney clear of the hangar’s shadow and angled the nose into the sunrise to let nature handle the rest. Three hours later, I was on the ground in Georgia, texting my new friends in Arkansas to thank them for the visit. I handed the keys to Grayson, who continued on to his home in Florida, and I drove home, thankful for the layover nature had thrust on me and for the trip back in time that followed. 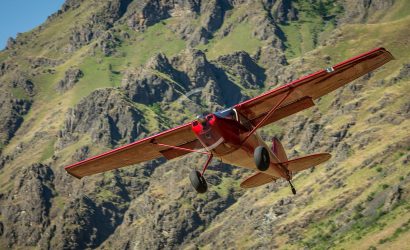