The Oshkosh AirVenture grounds at Wittman Regional were largely spared from damage as a huge storm packing hurricane-strength winds ripped through the region. The AirVenture grounds escaped damage, which is beyond fortunate, as thousands of campers in tents and in vehicles had nowhere else to go. There were no reported injuries from the storm, and no serious airplane damage, though EAA is still gathering data.

Nearby towns weren’t so lucky. The city of Ripon (which is where the Oshkosh arrival waypoint gets its name) was hammered by the storm, with downed trees and power lines. There were hundreds of thousands of residents without power, but, again, the show grounds was unaffected. 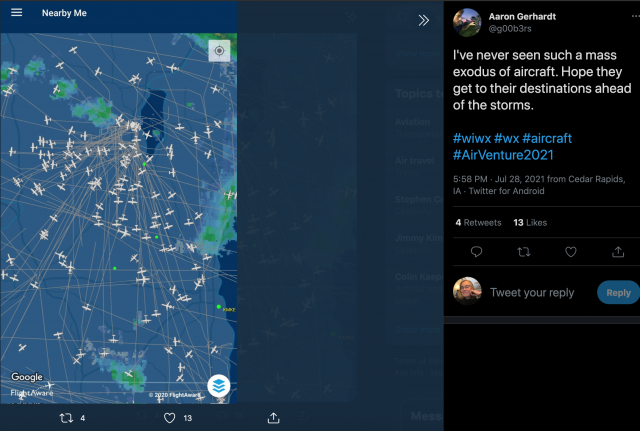 As the storm approached yesterday (Wednesday), many planes (we’d estimate in the thousands, based on the parking areas at the field on Thursday morning) headed home, or at least away from the storm. One Twitter user posted this image on his page of what the exodus looked like. Plane & Pilot’s own Jeremy King, who was camping in the Vintage Area, headed out in advance of the storm and made it home safe and sound.

EAA canceled yesterday’s Night Airshow as the storm advanced toward the region. It will hold the event tonight. We’ll update this story as new details emerge.