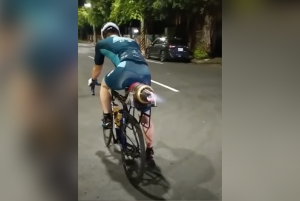 It’s fun, crazy and sometimes downright disastrous when people put aircraft engines on ground vehicles, but this has to be the craziest, most optimistic one we’ve ever heard of. As a bonus, it happens to be true.

According to Velo news, a Taiwanese man whose last name is Wang decided to mount a small turbojet engine to his bicycle. Yes, that’s right, his bicycle. The engine, which is designed for huge R/C model aircraft but which has been used on full-sized planes, as well, was mounted to the back of a very beefy-looking cross bike (apparently a hybrid between a mountain bike and city bike). And that’s about all the engineering that went into it.

The even more amazing thing than someone actually doing this is that nobody got killed. Heck, nobody even got hurt. Though we were worried about that dog, who seemed as interested in this project as we are.

And it wasn’t until after Wang’s midnight ride that the authorities contacted him about how it’s not really legal to speed down the streets of Taiwan on a turbojet bicycle. We’re guessing they let him get away with this one, what with the man’s mythic status, at least in Internet terms.

Oh, and don’t try this at home. Not even anybody else’s home!