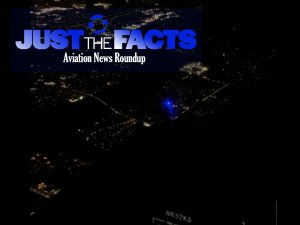 A Cape Air Cessna 402 crashed on landing at Provincetown, Massachusetts, on Thursday afternoon. All seven aboard, including the pilot, were injured, some seriously, and were transported to a local hospital. Weather reports at the time of the crash were intermittent heavy rain and low ceilings in broken and overcast cloud cover.

On Saturday, the United States will commemorate 20 years since the terrorist attacks on September 11, 2001, in which four airliners were hijacked, all of which crashed, two into each of the World Trade Center towers, one into the Pentagon and one into a field in rural Pennsylvania. Approximately 3,000 people were killed in the attacks, which resulted in the creation of a federal governmental department, Homeland Security, and launched two foreign wars, in Iraq and in Afghanistan.

The National Business Aviation Association announced that it would require vaccinations or proof of a negative Covid-19 test prior to admittance to its October 12-14 business aviation convention in Las Vegas.

A bolt of lightning hit the runway at Richmond International Airport in North Carolina, blowing a hole in the pavement. Repair crews quickly had the instant pothole repaired, but not before they shared photos of it on social media.

Red Bull-sponsored pilot Dario Costa set a Guinness World Record by flying his Edge 540 through not one, but two tunnels, in Istanbul, Turkey. Costa’s speed was measured at around 150 mph, though GPS reception during the flight was said to be poor.

A pilot of a small plane over Salina, Kansas, one night this week got lit up by a laser being aimed by someone on the ground at his small plane. The as-yet-unnamed pilot videoed the event and directed authorities to the location of the shooter.

The Biden Administration announced that it would fund continuing research into the development and use of alternative fuel for jet aircraft. The wide use of these fuels, referred to as Sustainable Aviation Fuels (SAF), could substantially decrease the carbon footprint of commercial aviation.

President Biden announced that he was mandating COVID-19 vaccinations for 100 million Americans, including health care workers and federal employees, including those in the military, law enforcement and transportation.

Women in Aviation International (WAI) is handing out the swag to girls aged 8-17 who sign up for its 2021 Girls In Aviation Day, scheduled for September 25, 2021. Participants in the 7th annual inspiration-fest will get a backpack, tattoo (just temporary), a key chain and more. Information is here.

A New Mexico pilot got two years’ probation and was fined $5,000 for flying without a license. The infraction came to light only after the pilot was forced to land at a private strip in Waterloo, Iowa, after his newly purchased but mechanically troubled Cessna suffered an engine failure. The pilot, identified as Keith Allen Thomas, made a successful forced landing with no injuries except to his wallet and record.