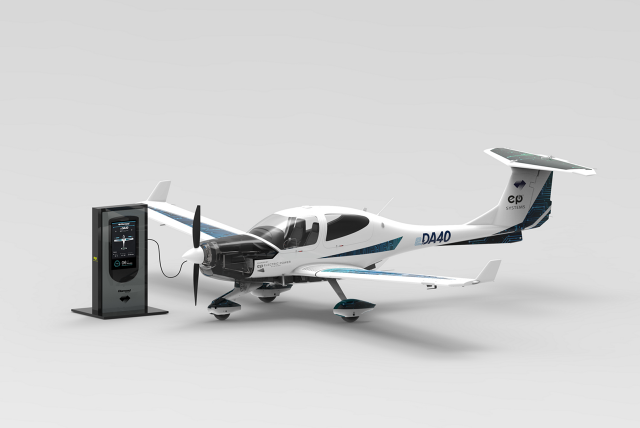 Diamond Aircraft announced recently that it would build an electric version of its four-seat single-engine, the DA40. The electrified version is called the eDA40. There are questions galore about this project, some of which have to do with its very viability.

Here are the details. The eDA40 is, as you can tell from the name, based on the DA40, an all-composite personal/training aircraft that’s been around for a couple of decades now. (How did that happen?) The DA40 is not only a popular model—the company has produced more than 2,200 of them. It’s also roomy, with excellent visibility, Skylane-like (or slightly better) speed and advanced avionics.

One other critical feature is its high-aspect ratio wing (long and short chord, like a sailplane). High-aspect ratio wings are very efficient, which is what you want in an electric airplane, because with the energy storage capacity of modern lithium-based batteries still marginally good enough for an electric plane (some would say that’s being charitable), you need every bit of efficiency you can muster.

Although it’s not showing all its cards, Diamond seems to be suggesting the main purpose of the eDA40 would be as a trainer. It’s a natural mission, perhaps the only one, as it allows the aircraft to fly close to home and return back home, where battery charging stations would be—such infrastructure is still rare in Europe and virtually non-existent in the  United States.

The DA40 seems to have shortcomings. Diamond says it plans to put the batteries in a belly pod, which makes one wonder—why? The problem with putting them in the wing, where fuel is normally kept, is that you need to access the batteries on a regular basis, and that would be a problem, as taking apart a composite wing even once is a non-starter. Putting the batteries in the rear seating and baggage compartment would, presumably, create a serious weight and balance issue, so the pod makes sense in both of those regards. But it will add drag and some weight, both of which are enemies of efficient flight.

As far as endurance, Diamond is hoping for 90 minutes, which is not much, though it would probably suffice for many training flights, especially if they’re mostly flown at reduced power, which they typically are. That 90-minute figure, however, is still a future goal, Diamond suggests. If that’s the case, that’s a problem. Having much less endurance than 90 minutes would create a serious concern on every flight.

Why did Diamond choose the DA40 and not the smaller two-seat DA20? In fact, I did a double-take when I read Diamond’s release about the new plane. Why would it elect to haul around the extra weight of a four-seat airframe when it already has a proven two-seater in its lineup? I don’t know the answer.

Finally, is Diamond doing this because it sees a real need in the training market, and if so, where does it see that need—in noise-sensitive Europe or in the United States and Canada? In other words, is Diamond really rolling out a product and a new business/profit center, or is it doing PR in a particularly effective way? Diamond, as you might know, has a record of taking a long time on its products, and that’s a good thing in a lot of ways. It tends to wait until it’s right (with noteworthy exceptions, namely Thielert’s hugely problematic diesel engine, I admit). The company seems committed to the eDA40, and we’ll see how the program progresses, but in the knowledge that fielding an all-electric plane is the bleeding edge of technology, and there’s no guarantee of success.

Most pilots are environmentalists, in that they want the world they fly in to be protected, though when it comes to their airplanes, the only propulsion choice most pilots of light planes have is the internal combustion engine, which runs on gasoline or Jet-A fuel. These fuels are excellent reservoirs for energy. In terms of weight for power, refined petroleum fuels are about 50 times as energy-dense as today’s lithium-ion batteries. That is a dramatic delta. In fact, the inefficiency of lithium-ion batteries compared to our most common aviation fuels, 100LL aviation gasoline and Jet-A (diesel), is striking and leads to the question, are we really ready for electric flight yet? And if not, why are manufacturers pushing the boundaries of electric capabilities?

There are a few good reasons, and cost is number one. While outfitting an airplane with an electric propulsion system is costly, even compared with our current expensive internal combustion engines, the downstream costs are tiny in comparison. A recent Plane & Pilot survey found that a strong majority of aircraft owners or would-be owners would opt for electrical propulsion if it were practical for them, which it is not. The reason they gave was simple: cost.

Diamond might also just be getting in on the ground floor here, starting up its electric flight operations in order to be ready for what could conceivably be a rush of business when and if battery technology improved to the point where it is practical for general-use light aircraft, which it currently, again, is not. Not even close, in fact.

The third reason is optics, and bear in mind that companies most likely have multiple motivations to be working on electric programs. It might be fashionable for aviation companies to be seen as green, or at least working to get there, and I’d argue that it’s crucial to our survival. As the drive for the world to cut greenhouse gases continues, the pressure will mount on all segments of aviation, including light general aviation, to make improvements.

Is the eDA40 a real product? Not yet, and it’s impossible to say when or if it will be. One thing is certain, though. If practical electric planes were to emerge over the next several years, and that’s a big “if,”  there would be great demand for them, a level of demand, I’d argue, that we have never seen before. And that would be driven almost entirely by cost. Ask airplane owners what the number one deterrent to flying more is, and most will tell you that it’s the cost of fuel. Ask flight school operators what the biggest obstacle is to their becoming more profitable, and most will tell you the same thing.

Even though there’s a drive to reduce carbon emissions, that won’t be the driving force behind the success or failure of electric aircraft. It will be the business owners who determine the success of the eDA40, as well as other electric planes. After all, they will be the ones opening their wallets in the hope of a technology that will free them from the gas pump, from combustion engines and all the big financial negatives related to them. If Diamond is being driven by this understanding of the future of flight training, and it very well might be, more e-power to them.