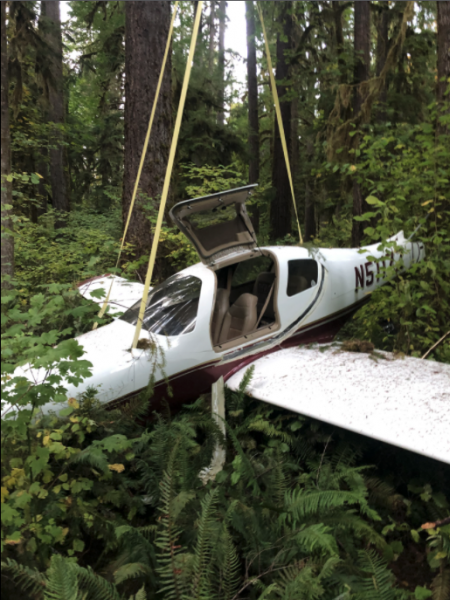 A pilot flying a Lancair ES, a kitplane that was the genesis of what eventually became the Cessna TTX, was in deep trouble when the big engine in his piston single hesitated briefly before taking the rest of the day off with the airplane over dense forest in the Northwest U.S. The plane was descending into Eugene, Oregon, when things started to go bad.

As he wrote in his Facebook post documenting the mishap, “Crashed my airplane yesterday descending into Eugene, 35 miles out or so, over the mountains, bit lower than I would normally be for a broken cloud layer. Sudden engine decel and misfire. Ruhroh. Made a quick glide assessment, nothing but forest. Went through all the emergency checklist items in my head, engine just got worse, cockpit starting to fill with some smoke, not a ton of altitude, committed to a forced landing. Let ATC know where I was at, surveyed my glide options again, nothing but dense forest.”

He had another option, though. “Committed to an airframe parachute deployment, yanked the handle and after a wild ride bouncing through the trees, the BRS Aerospace parachute delivered me safely to the forest floor.” He then editorialized on the subject, “Kids, if you fly single engine over hostile terrain, get an airframe parachute. Not sure I would have survived that without it. I believe BRS has a better than 99% survival rate when deployed within the operating parameters.”

The “chute” comes as standard equipment on all Cirrus aircraft and can be installed on a retrofit basis on a handful of others. The Lancair ES the poster was flying is a kitplane, so the builder/owner can decide to install a chute, if such an installation is available for that model, as it is for the Lancair ES.

We are sure it must have been a wild ride indeed, and we are so happy that it turned out the way it did.