In the exhibits out front of exhibit buildings A and B at Sun ’n Fun, there’s a new pint-sized warbird replica, and unlike most replicas, it’s a deep cut from the World War 2 fighter fleet. ScaleBirds has a 55%-scale P-36A—the radial predecessor of the more popular P-40 Warhawk. The design is the first in a projected series of classic fighter replica kits that will utilize a common structure—a follow-on P-40 will be the same kit, save for a few fuselage fairings, and a firewall-forward shift from a Verner radial engine to a pointy nose that is anticipated to house a Rotax, Viking or AeroMomentum engine.

According to ScaleBirds engineer Aaron Ide, the prototype’s first flight will be in the very-near future. A follow-on of 11 kits will be made—one built by the ScaleBirds team and 10 by “beta builders,” experienced builders who’ll help iron out any kinks, before serial production of kits begins. Beta kits are priced around $39,900 and serial kits are estimated to be on track for the mid-$40,000 range. 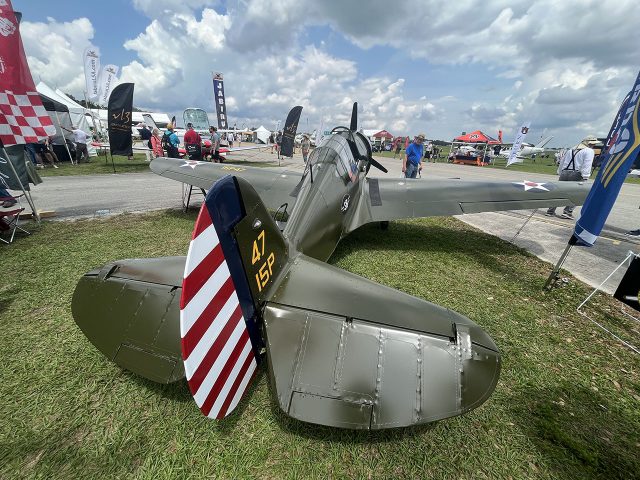 The prototype is on display and open for pilots to try on for size—for a half-size fighter, the cockpit is surprisingly roomy and comfortable. It’s hard not to grin as you settle into the seat, and on first impression, visibility isn’t bad at all, save for that bit blocked by the round engine out front.

The design is slated to be mildly aerobatic, with load limits in the range of +4.4/-3g depending on operating weight. The prototype is equipped with a Verner 7U engine, a seven-cylinder, 120 hp radial engine. Initial estimates aim for a 383-pound useful load, with three hours of fuel capacity. Preliminary specifications include a 23’ 8” wingspan, and length of 18’ 4”.  Cruise speed on 75% power is estimated at 113 knots and stalling speed of 48 knots. The prototype and beta builds will have fixed landing gear; later kits may have provision for retractable gear. The kit is all aluminum, utilizing blind rivet construction wing skins, will come pre-drilled. Early estimates of 600-800 hour build times will be fine-tuned during the beta builds.

The same basic kit, with minor changes, is slated to be adaptable to become a replica P-40, or P-47. If you want to fly the colors of the other side of the conflict, other kit options being discussed for down the road include finishing it as a FW-190 or A6M Zero.  But that’s years down the road, perhaps to be considered after your P-36 build is complete.