Austria-based energy-drink maker Red Bull has a thing it calls the Red Bull Air Force. There is a liberty taken by calling a cadre of BASE jumpers, skydivers, and pilots—anyone who floats, flies, or falls to as part of Red Bull’s enormously successfully self-promotion—an “air force,” but the nickname works. The former Red Bull Air Races, for example, would fall under the promotional umbrella of the Red Bull Air Force.

But a vertical stunt involving two diving Cessna Skylanes and a mid-air swap of pilots? Maybe Red Bull didn’t notice how valuable the trusty 182 has become to owner-pilots and flying clubs.

Nevertheless, they’re going for it, and they want you to tune in. The pilots will be Luke Aikins and Andy Farrington, and they’ve equipped each Skylane belly with an enormous dive brake. Red Bull states the stunt will begin from 14,000 feet and that the planes will maintain about 140mph in “synchronized” dives while the pilots exit, cross in the air and take up piloting each other’s aircraft. 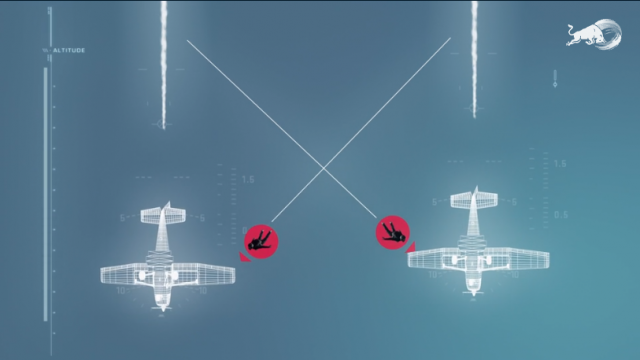 While Red Bull declares the stunt a “world first… 10 years in the making,” it is not without precedent. Even the earliest barnstormers performed air-to-air transfers. About two decades ago, X-Games champion and MTV personality Troy Hartman and pilot Robert Scott claimed the “first ever plane-to-plane skydive,” wherein a Piper Pacer was held in a vertical dive via drag chute. Finally, don’t forget the opening sequence of the 1995 James Bond film Goldeneye, when stuntman B.J. Worth sailed from a motorcycle, off a cliff, into a diving Pilatus Porter.