My instructor and I were quiet as we flew, winging along, a couple of hundred feet above the starkly beautiful western Mojave Desert. I was doing the flying, working on my commercial certificate (which I would not complete for another decade and a half ), and the guy in the right seat, Si Campbell, was doing the instructing, which he mostly did without saying a word. When he did say something, it carried weight. That early-spring day was perfect for flying. The winds were a whisper, and the air was crystal blue. Such spring days pass for a near-miracle in those parts. From January through around May, the wind mostly whips in from the southwest, stirring up dust and turning the air light dusky brown. Not that day. 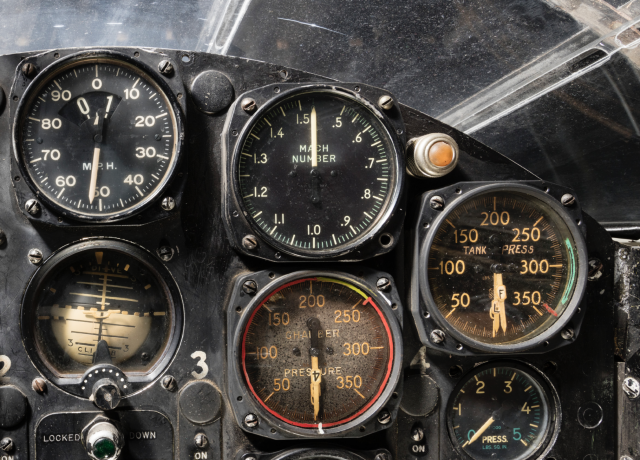 We were flying a red-white-and-blue, late-model Piper Warrior, one of the special bicentennial issue models. It was

the plane I had passed my Private Pilot check ride in the month before. The band instructor at the local community college had bought the plane and put it on leaseback. All the planes on the flight line were a year or two old. The ’70s were like that, and, yes, I miss those days, too.

Back in the cockpit, I descended on a tight base leg, power back, a notch of flaps in and going for the second, setting up for a touch-and-go at Rosamond, a little desert airstrip located just a few miles west of Edwards Air Force Base and its massive dry lake runways. This little strip was almost impossible to see, but it was near its own dry lake, which you couldn’t miss. Si had taught me to look not for the thing you won’t be able to find but for the landmark you can, and then, if you know where the airport is in relation to that, you’ll find it. I use the technique to this day.

I was just a kid, but I knew my aviation history. And I lived among retired jet jocks galore. I knew where I was, airborne in a special part of the world, channeling the ghosts of Chuck Yeager and Scott Crossfield and William Dana and Neil Armstrong, as I abandoned the base leg altogether and turned directly for field.

I’m not sure what possessed me, but instead of flying a standard base to final, I just pointed the nose down and at the numbers. Then, without warning, out of nowhere, I felt the controls recenter, strongly, assuredly. I looked over, and, from the right seat, Si, a grandfatherly looking, white- haired, soft-spoken fellow, had simply corrected the flight path with his controls. He said only, “We won’t be flying like

The original Bell X-1, Glamorous Glennis, named after Yeager’s wife, launched from the belly of a specially modified Boeing B-29 mothership. Once Yeager lit the rocket engine, the bomber was left in its wake, a fitting analogy for the advent of the new technology the X-1 helped usher in.

that today.” That is, in fact, all that was ever said about it. Chastened, I squared off the pattern and did a by-the-book touch-and-go, the desert hills before us giving way to a backdrop of big rock behind them as I made the left turn away from them over the raised arms of the Joshua trees below and headed back toward home.

If you’re thinking my instructor must have been some kind of fuddy-duddy, I can assure you, you couldn’t be more wrong. Si was retired from the Air Force, where his last job had been as an instructor pilot in the Mach 2.2 McDonnell F-4 Phantom. He also taught in the Lockheed F-104 Starfighter, which, with its top speed of just Mach 2, was a slowpoke in comparison.

Before that, Si did three tours of duty in Vietnam as a forward air controller flying propeller planes, Bird Dogs and O-2s over the jungles of Southeast Asia at treetop level and came home without a scratch to his wife and nine kids every time.

He never talked about any of it, but from my understanding of Si’s Air Force job history, his boss on one and possibly two different occasions had to be none other than General Charles Elwood Yeager, the famous seat-of-your pants, West Virginia-bred, hot dog pilot who shot down

11-1/2 Nazi fighters in his P-51 in World War II and went on to fly 127 combat mission in Vietnam. Yeager was, as you might know, a base commander at several different USAF facilities, a few of which Si spent time at. In short, Si was a badass pilot who dressed and spoke more like Mister Rogers than Buck Rogers. I mean, just look at the guy. He was no Chuck Yeager. Or was he? He must have been, right? Regardless, his lesson for me that day was, fly conservatively. My quandary, then and now, is how to square those two worlds, those two identities.

Not that Si didn’t teach the entire envelope—he seemed happiest, in fact, at its furthest corners. If a 20-knot crosswind was blowing, Si would toss me the keys. On my first foray into controlled airspace, we went to Lancaster’s Fox Field. The second time, we went to LAX. And we did spins, spins by the dozen in both directions, in the flight school’s Cessna Aerobat. And we landed on local dry lakes, too, engine out, know the wind, suss out the surface and land. At the time, I figured it was just for the fun of it. There were some important lessons to be learned, though there were probably some I missed and might still be missing. Forty years down the line, I’m still “ learning from him. And the message that day, when he corrected the controls, stuck with me because he wasn’t telling me how to fly. He was showing me how to be.

To be honest, I was smitten with the thrill of flying fast and low. As a new pilot, hell, even before I got my ticket, I did things in airplanes that, in retrospect, I wish I hadn’t, though it’s probably closer to the truth to say that I know that I should wish that I hadn’t done them. And in my defense, who could blame me? The winds that blew through that place, that high desert, dry-lake-dotted basin-and-range wonderland, were imbued with some kind of magic. I was, after all, sailing in that same ocean of air as Chuck Yeager did when, 30 years prior, not much older than me at the time, he had flown faster than any human ever before.

It wasn’t just me. Chuck Yeager, along with a whole generation of flying heroes, changed everything for all of us. Our skies were closer to heaven than ever, and our idols moved throughout them like gods. In my father’s youth, the heroes were Hollywood singing cowboys with pretty horses and six-shooters? How last century. We had real-life high-flyers in Mach-busting jets with weaponry that would wow Aries himself. Our heroes were alive and busting the sound barrier in real life. How could a young pilot not be inspired?

Yeager’s influence on pilots was hardly limited to my little sagebrush patch of the world. Its reach was global, which is fitting for the supersonic world he ushered in, a globe with continents now linked by hours instead of months. Yeager’s legend, his myth, his story wasn’t just inspiring—it also helped create the very idea of what a pilot is…it’s Chuck Yeager, people. Smart, supremely self-assured, willing to live with a high degree of risk, and all while having the time of his life. That was a pilot. It kind of still is.

Of course, all or most of that flew in the face of what we know about safety now—heck, what we knew about it back then. The things that keep you alive are caution, humility, thoughtfulness and planning, along with an ongoing consideration of and mitigation of the risks. It’s not inspirational, just critical to survival.

General Yeager knew those things, too. He had to in order to survive and thrive in the regimented world of Air Force regulations, of dress uniforms and budgets and assignments. Even so, his desire to fly fast and live hard

seemed to be what really mattered to him most. And those traits saved his life a lot more than once. After all, when a German fighter is on your tail, or when you’re 50 seconds into a baffling, out-of-control, tumbling descent in an X-plane, or when you’re at risk of missing out on making history in a rocket plane just because of a few broken ribs—well, in situations like that, you couldn’t think in a linear way. You had to think supersonically. And he did, time and time again.

Me? I’m just happy to have had shared a cockpit with Si, a pilot I believed back then and believe to this day was the best in the world, and I’m equally happy to have had inspiration from the guy who pushed it to Mach 1 and beyond, in real life and in legend. Together, they made flying come to life for me.

Si Campbell died in the early 1980s in the air while giving a commercial check ride. I’ve missed him ever since. I wish I could fly with him today. I’d have so many questions, and there’s so much left to learn. But that’s not the way it works.

And even though he lasted four decades longer than Si, Chuck Yeager, the ultimate flying cowboy, is dead and gone, as well. But you know what? They’re not really gone. Just look up at the sky. That’s where they are. Where they’ve always been, in fact.