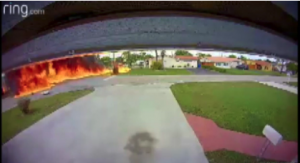 We’re sharing with you here a single frame of a doorbell video capture of a crash in North Perry, Florida, of a Beech Bonanza that was, according to reports, attempting what is known in aviation as “the impossible turn,” that is, a turn back to the runway after losing engine power on departure while still at low altitude. In this case, the adjective “impossible” was apt. The Bonanza didn’t make it, instead crashing short of the runway, impacting catastrophically onto a perimeter roadway, killing both people aboard the Bonanza and a child in an SUV that just happened to be driving by when this disaster struck. It’s horrifying to think about.

But seeing it is even worse, and if you haven’t seen it, take my word for it, it’s bad. I, for one, am sorry I did.

This is what happens. The aircraft comes into the field of view of the doorbell cam very suddenly, and disaster unfolds in a span of maybe two seconds, as the plane impacts, crushes into itself and explodes into a fireball, as fuel that had been breached from the fuel tank caught fire and left a trail of flame in its wake.

There is something to be said for seeing crash footage, at least in theory. It is not, in fact, something that we as a brand are against categorically. There is, often value in seeing how things can come undone. That way we know in a graphic fashion how bad it can be and therefore double down on our resolve to never let it happen to us.

And one might argue that this video does just that, that it shows just how devastating the consequences can be of trying to make that so-called impossible turn, if indeed that is what we are witnessing. From early reports, that seems the likely cause, but the NSTB has not yet weighed in on it yet and won’t for some time. So consider this a bit of widely held and sensible speculation and accept our caveat that we do not yet truly know the cause. Regardless, the video does show the devastating forces involved in what looks to be an accelerated stall into the ground.

Might things have turned out differently if the pilot had landed straight ahead, as is the usual advice in such circumstances? Maybe. The truth is, I don’t know and you don’t know either. No one will ever know.

What we do know is this. Three people lost their lives in this crash, and there are literally hundreds if not thousands of family and dear friends who have been devastated by this loss of life.

The video in no way sheds light on anything to outside observers like us. It does show in most horrific fashion, too horrific, in fact, the end of some people’s lives gone far too soon. If you want to see the video, well, that’s up to you, but you’ll have to find it elsewhere. But do so advisedly, because once you watch it, it’s impossible to unsee.