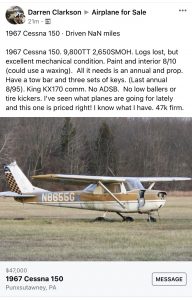 The ad was published, of course, on April Fools’ Day, and no, it isn’t real. Look at it! The airplane doesn’t need a lot of love; it might be better off if someone put it out of its misery. How could anyone seriously be asking for nearly $50k for this pile of rust? We don’t know, either. But the patent obviousness of the faux listing didn’t stop numerous posters from commenting that the price was too high. One asked if the poster had mistakenly added an extra “0” to the price tag.

So, just a reminder, if you’re one of those people who sometimes takes tall tales and far-fetched factoids for the truth, you might want to set a reminder on your calendar app for next April 1st, because it comes around every year, just like the great, twisted Bill Murray/Andie MacDowell movie, Groundhog Day, in which Murray relives February 2nd, aka Groundhog Day, over and over again until he, spoiler alert, finally gets it right. The setting for that movie? Punxsutawney, PA, of course. Check out the location of the plane in this ad.