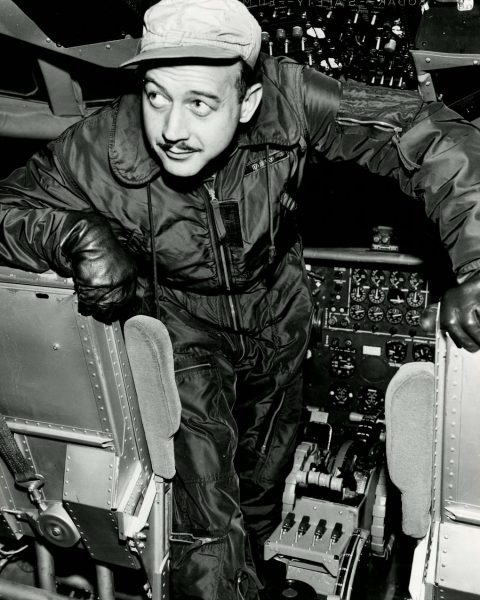 The grainy video shows something that, to today’s eyes, looks impossible. Surely, it looked just as impossible then. A red-and-white Boeing 707 airliner approaching the crowd and then commencing to do a roll, something that even many pilots would find incomprehensible. But on Aug. 7, 1955, in front of an audience, that’s just what Alvin M. “Tex” Johnston did.

Born in 1914 to farmers, Johnston turned his eyes to the sky at an early age. When he was only 11 years old, Johnston received his very first airplane ride from a barnstormer who had landed near his family farm. He was hooked. By the age of 15, Johnston had saved his money from his newspaper route to purchase a damaged Cessna Glider. After restoring the glider to flying condition, Tex would climb aboard while his father pulled the glider behind his car. Johnston would then release the tow cable and glide to a landing in nearby farm fields.

Upon his graduation from high school, Johnston knew he would do anything and everything to stay in the air. He turned to the Spartan School of Aeronautics in Tulsa, Oklahoma, where he received his aviation mechanic’s certification. This allowed him to fund his own flight training, and he soon joined a traveling aviation show, known then as a flying circus, working as both a pilot and mechanic until he was able to save up enough money to purchase his own biplane.

But World War II was on the horizon, and Johnston transferred his skills to the U.S. Army Air Corps Ferry Command, ferrying planes around the country. This was short-lived. In December of 1942, Johnston’s skills had gotten him noticed by Bell Aircraft chief test pilot Robert Stanley, who soon offered Johnston a job. This job earned Johnston his now-legendary nickname “Tex” for his insistence on wearing a Stetson and cowboy boots on the flight line.

Johnston loved working as a test pilot, regardless of how dangerous it truly was. Test pilots had a fatality rate similar to those of combat pilots. Yet Johnston remained undeterred, even when tragedy struck close to home. In 1946, Johnston convinced Larry Bell, founder of Bell Aircraft Corporation, to purchase two surplus P-39 Airacobras, modify them and race them in the National Air Races as a publicity stunt. Yet the day before the race, one of them, Cobra I, crashed, killing pilot Jack Woolams. Bell executives debated whether to allow Johnston in Cobra II to race. Johnston insisted he should, citing it as what Woolams would have wanted. Johnston went on to win the Thompson Trophy at the National Air Races, setting a speed record of 373 miles per hour.

Johnston was still a test pilot, though, not a race pilot, and he went on to work on the Bell X-1. His work both designing and flying the X-1 would later help Chuck Yeager become the first man to break the sound barrier. But after the success of the Bell X-1, Bell Aircraft chose to pursue helicopters. Johnston learned to fly the helicopters, but his love remained with airplanes, and in July 1948, Johnston became a test pilot for Boeing.

His time with Boeing is certainly notable. He flew the B-47 Stratojet and went on to pilot the very first flight of the B-52 prototype. Yet these remarkable feats are not what Johnston’s time at Boeing is remembered for.

In 1955, on a flight to demonstrate the new Boeing 707 Airliner to aerospace and airline executives aboard Boeing President Bill Allen’s yacht, Johnston decided to give them a demonstration to remember. The two rolls that Johnston performed, captured on grainy video, were certainly unforgettable. The following Monday, Allen called Johnston into his office, asking, “What did you think you were doing?” Johnston replied, “Selling airplanes.”

Johnston passed away in 1998 of Alzheimer’s in Washington state. Yet his legacy lives on in his book, “Tex Johnston: Jet-Age Test Pilot,” and his 1993 induction into the National Aviation Hall of Fame. And, of course, as the man confident enough in his flying skills to roll a 707.

Do you want to read about another Incredible Pilot? Check out “Cornelia Fort: First Female Pilot To Perish In Service To The U.S. Military” here.