There were several long moments as I stared alternately at the giant dune adorned with a giant monument and the mangled metal of my Mooney’s baggage door support, a folding bit of metal that holds the door open for loading and unloading. Its simple, over-center locking mechanism had been wrecked at my direction, as I asked Amy to close the door while I tied the plane down. Amy had never fully opened or closed the door, and I had nobody to blame but myself as I contemplated how to get the door closed.

There were two factors lending a sense of urgency to the mission: First, there were people watching. We’d just landed at a national monument, so there were plenty of people at the fence looking at the swiftest airplane parked on the ramp. Second, there was a gray giant of a raincloud overhead, and the bottom was minutes from falling out. A combination of three days studying forecasts and more than my share of luck had put us overhead in a very narrow window of Visual Meteorological Conditions; the low overcast of the morning burned off, and we hit the sweet spot of good ceilings and visibility before that same evaporated mist returned with a vengeance that afternoon. 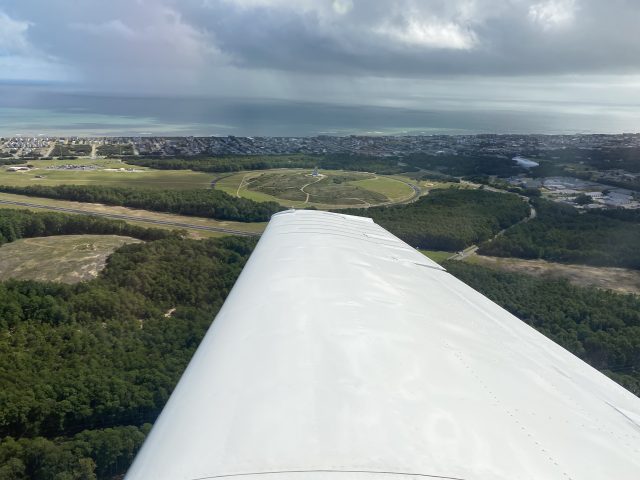 It feels only natural that here, in the shadow of the birthplace of aviation, I was cussing under my breath as I wielded a pair of vise-grip pliers and a Snap-On screwdriver I’d owned for nearly 25 years, hoping to salvage the buckled metal. It had bent over upon itself, covering the screw head I needed to reach to remove the thing, and a crack appeared as I fought with the thing. The mission shifted from rescue to salvage, and I had the offending piece resting in my travel tool bag moments later. I glanced back to the shrine erected to Orville and Wilbur Wright. Maybe their spirits were laughing at me, but the ghost of Charlie Taylor, the mechanic who built their engines, was there with me, a sympathetic hand on my shoulder as I contemplated the repair to mend the attachment point when I got home.

Kitty Hawk is the name many associate with the windswept spot where Wilbur and Orville took the first timid steps to tame the sky, but the smaller community of Kill Devil Hills is where it happened, Kill Devil Hill being the biggest of the sand piles where they launched hundreds of times in their gliders, learning as they went. The designs were refined as the gliders grew; weight shift gave way to wing-warping, the need to control pitch quickly became apparent, and finally they figured out that a rudder was necessary if they wanted flights to end with more finesse than a cartwheeling spin into the sand.

By the second day of our visit, the rain had abated, and we visited the monument, this time going beyond the pilot’s shack by the runway at First Flight Airport and on into the park. As you walk in from the airport side, an expansive green pasture to the left looks inviting as a runway; the Wrights agreed, based on the fact that that’s where they constructed the launch rail for their Flyer. The giant dune that is Kill Devil Hill stands straight ahead, a number of paved sidewalks spiraling up its side to ease the angle for us non-athletes. As Amy and I scaled the hill, I noticed the mix of people among us. A middle-aged couple was coaxing an elderly relative along, and a young Spanish-speaking family with kids made remarkably good time up the path. Up top, at the base of the monument, Amy and I sat on a low wall as others posed for the obligatory photo with the 60-foot granite tower. The hill itself is 90 feet to begin with, giving a great view of the island. It was a fine spot to sit and contemplate things.

I struggled with that. “It might be more like sitting at John Wesley’s desk,” I offered as a parallel to her work in the United Methodist Church, narrowing the significance a bit. The tales of Icarus and Daedalus showed that folks longed to fly for thousands of years before the sons of a bishop took wing here. Leonardo Da Vinci drew plans of flying machines. Otto Lilienthal and Octave Chanute paved the way with their gliding experiments. Some even argue that Gustave Whitehead beat the Wrights by years, flying a steam-powered contraption over his town. The Smithsonian was backing Samuel Langley’s venture to build a flying machine at the same time. We’d have taken flight with or without the Wrights. They were just the first ones to put it all together with a powered, controlled, heavier-than-air flying machine, the basic description fitting the machine that had brought Amy and me to the Outer Banks of North Carolina that autumn day.

Standing at the stone marking the launch spot for the Flyer’s first powered flights, the first three flights are more like hops, progressively stretching out. The first three flights reached 120, 175 and 200 feet, respectively, the first flight being shorter than the length of the Airbus I fly at my day job. The brothers were learning, and on the fourth flight, by Wilbur, stretched out 852 feet. Standing at the marker where that last flight landed, you have to squint a little to see the stones marking the previous flights, if your eyes are like mine. The rapid advances that December day became a metaphor for the next century of flight as the idea of flying went from a laughable notion to a serious enterprise, and new flying machines grew larger, faster, safer and more efficient. 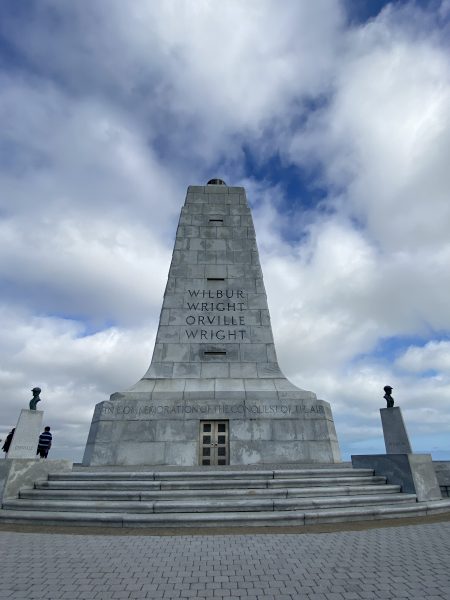 The stone, commemorating the 1903 Flyer’s launching point, was placed in 1928. Both Wrights stood there, obviously. The photo of the dedication on a plaque nearby shows Amelia Earhart thereas well. Thousands of pilots had stood there, maybe millions, before I joined the “I’ve been there” club. It’s a pilgrimage for aviators, a historic ground for those who care, and maybe the scene where some folks got inspired to try their hand at flying as well.

In a way, preservation and destruction are the same in a place where the constant was change. The windswept, shifting dunes the Brothers sought out as a launching place have been rendered still, the hill covered in scrub brush to anchor it in place. Historic photographs give an impression of a sandy plain extending to the ocean; visitors now get a grassy pasture that ends with a treeline of pines; beyond that, there’s a highway, a strip mall and several rows of vacation properties before reaching the water.

Several days later, we prepared for our departure. I’d moved the Mooney from nearby Dare County Regional Airport the night before (one 24-hour overnight at First Flight is allowed per month). As we packed our bags into the plane, I spied a young family watching from the other side of the fence. A gap through the fence rails lined up with the eyes of a young boy, and his gaze hadn’t shifted from the airplane for several minutes.

I closed the baggage door and walked toward the fence’s gate. “Going to the bathroom?” Amy asked.

As I approached the fence, the boy’s gaze hadn’t left the plane; he kind of shook with surprise when he realized I’d walked over and was talking to him. It was like I’d broken a trance between him and the airplane.

“Would you like to see one a little closer?” Also, yes.

I looked to his parents. “Are y’all okay with this?” Absolutely, they said, but they eyed the sign on the fence. “Authorized Personnel Only,” that dreadful phrase tasked with keeping honest people honest for decades. “You’re authorized. I authorize you. Come on out.” 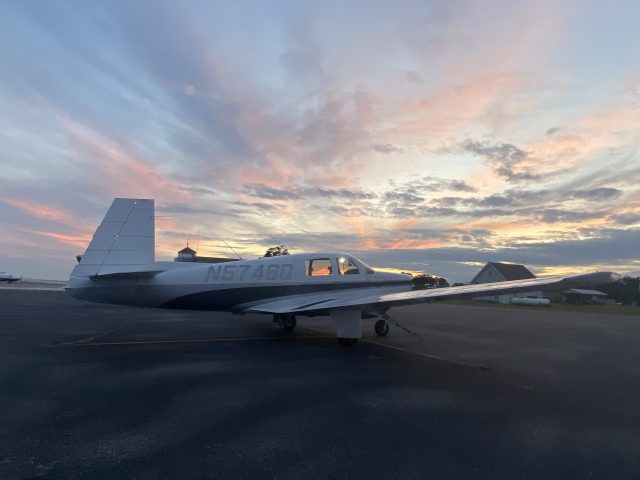 They opened the gate and walked from one world to the next, shifting from spectators to participants in the magic of flight. We chatted a moment about schools—the parents had gone to Auburn, as did Amy. As we neared the airplane, I explained to my new friend, Robert, that we had to inspect the airplane before Amy and I could fly home.

I checked the oil, and he untied the ropes. As we walked around the plane, I explained what I was looking at and what the big pieces did. I explained at the right tire that they needed to be round, not flat. “This one is round, too!” he hollered when we got to the left main tire. We moved the flight controls, and he repeated to me what each one did. I pointed out the fuel sumps, and he carefully helped me drain the samples. I stowed my screwdriver and drain cup and offered him a chance to see inside.

His eyes went wide as he looked upon the panel, full of switches, knobs and gauges. We lingered for a long moment, then he stepped away to rejoin his parents. I can’t speak for the kid, but it was a magical moment for me, a look back at a fateful day when I first came into contact with flying machines.

“What do we tell him?” the parents asked.

“Thank you for coming out here today, buddy,” I replied, with just the slightest additional moisture creeping into the corners of my eyes. “I’m glad we got to meet.” PP