An instructor pilot and a trainee aboard a Textron Aviation Beechcraft T-6B Texan II trainer were killed on Friday when the plane crashed into a densely populated residential neighborhood in Foley, Alabama. There were no reported injuries on the ground. The aircraft was destroyed, with post-crash photos of the scene showing a small accident scar and a likely explosion upon impact. 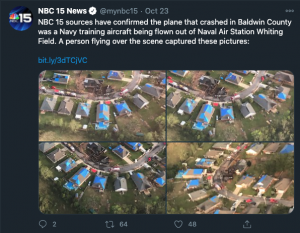 On Sunday, the Navy released the names of the aviators killed in the crash, instructor pilot U.S. Navy Lieutenant Rhiannon Ross, 30, and U.S. Coast Guard Ensign Morgan Garrett, 24. The flight had taken off from Naval Air Station Whiting Field, about 20 miles northeast of Pensacola in the Florida Panhandle. Whiting is one of two major United States T-6 training bases. The plane is operated by military forces in 10 other countries around the world.

The T-6B Texan II trainer is a single-engine turboprop that was designed in the 1990s as the new advanced trainer across military branches. A two-seat tandem, low-winger with a bubble canopy, the T-6B was given its designation and nickname of “Texan II” in honor of the North American AT-6 Texan trainer, which is widely regarded as one of the best advanced trainers of the WWII-era, and beyond. In the competition for the military to select the next-gen trainer in the 1990s, the Texan II beat out jet trainers that had been advanced by other manufacturers, in part because is was much cheaper to operate than jets while still featuring very jet-like controls and handling by design. The trainer has been in production since 2000. Based on the Pilatus PC-9, Beechcraft has built more than 850 Texan IIs over the two decades the plane has been in production.

The Navy is investigating the crash.