Here’s Part 2 of our top stories for 2020, numbered 7 to 1. Check out our previous installment, here.

7. Extreme Weather and Wildfires. Some of the biggest stories of 2020, a year defined by the pandemic, were other kinds of natural disasters altogether.

Hurricanes. The United States was hit by numerous named storms, a number of which were full-fledged hurricanes as they made landfall in the U.S. Hanna, Isaias, Laura (a strong Category 4 Hurricane that cost 77 lives and an estimated $15 billion in damage), Sally, Delta and Zeta, inundating low-lying airports with torrential rains and wreaking havoc with high winds in other cases.

Tornadoes. In addition, a number of severe storms tore throughout the American southwest, spawning tornados, some of which hit GA airports, including Nashville’s John C. Tune Airport, which suffered millions in damage to its infrastructure in addition to the tens of millions that aircraft owners lost when their aircraft were destroyed, and it was one of several small GA airports hit by tornados.

Wildfires: At the same time as hurricanes were ravaging the south, record wildfires destroyed more than eight million acres of wilderness and more than 15,000 structures over the course of months as they made their devasting way across the American West from Colorado to California, up the Pacific Coast and inland to norther tier states. And it’s hard to believe, but it would have been much worse, had it not been for the efforts of firefighters, including those pilots flying firefighting aircraft of all descriptions, from single-engine spotters to jumbo tankers.

6. Air Shows Canceled. Considering the havoc that weather and disease wreaked on the world this year, with the United States hit harder than any other nation, the news that airshows were canceled seems out of place in our top stories roundup. But it was indeed big news, though we wouldn’t expect non-pilots to get it. When the pandemic started getting people’s attention, it understandably took a while for people to get their heads around the seriousness of the situation. The first major airshow of the season was in the hot seat too, with Sun ’n Fun initially fully intending to hold its April show as planned, full speed ahead, and only very late in the game, announcing that it would cancel the show. Even then, there were those who at the time told us we were crazy to even be bringing up the question of whether Oshkosh AirVenture would happen. We weren’t, and it didn’t. The National Business Aviation Association event in Orlando in October got the axe, as did the High Sierra Fly-In, the backwoods flying gathering on a remote dry lake in the Nevada high country. The question now is, will 2021 editions of these same events go forward? We certainly hope so, but we’re not taking anything for granted. 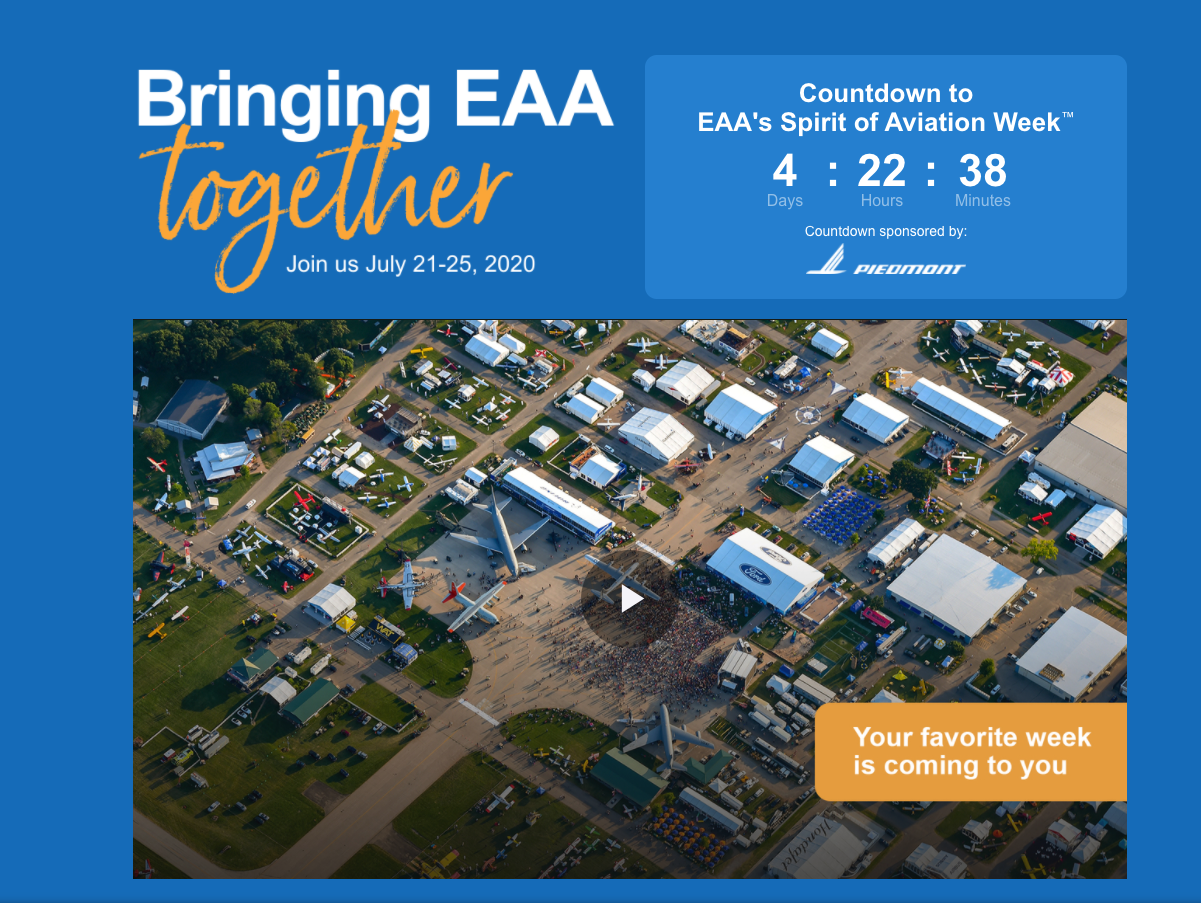 5. Virtual Airshows? It’s an oxymoron, we agree, but there were virtual events hosted by Sun ’n Fun, the EAA, the NBAA and others, all of it in an attempt to recreate at least a little of the value of the in-person events that got cancelled by the pandemic. All of them were worthwhile; some were excellent. But none of them came close to capturing the magic of the real thing. We hope such replacement events never have to happen again.

4. Kobe Bryant Crash. The crash of the Sikorsky S-76 helicopter in California, which killed all nine people on board including global celebrity and former star NBA basketball player Kobe Bryant, was just one crash in a year in which there were more than 200 fatal crashes in the United States alone. What made it different was the public interest in it, though interest isn’t a strong enough descriptor—it was obsession. It was horrifying, true. Three girls, including Bryant’s own daughter, Gianna, were killed in the crash. The final report on the crash hasn’t yet come out, but already pilots of light GA planes have taken away one critical lesson. VFR into IMC kills, and here’s how it kills.

3. Garmin Autoland. While this esoteric aviation avionics story might seem out of place here, it could very well be the story that best describes the future of much of aviation. Garmin’s Autoland, to start with, was a tour de force. It was an all-up solution to the question, “What happens if a pilot of a single-piloted flight becomes incapacitated?” Autoland answers by saying, “I got this.” All it does is figure out that something is the matter, takes control of the plane, figures out where the best place to land is, flies there, taking into account weather and terrain, briefs the passengers (thoroughly too), configures the airplane for landing, lands it, puts on the brakes and shuts the engine off, all while communicating the precise nature of the emergency to ATC. Autoland is fielded in just three planes, the Piper M600, the Cirrus SF-50 Vision Jet and the Daher TBM 940, all single-engine, pressurized turbine-powered planes. Seems like a lot of work for a small market, and it might be if that were all that was going on. But the truth is, the technological know-how that Garmin developed in its FAA- and EASA-certified Autoland has wide applications, ones that extend far beyond the kinds of planes we fly and into the cockpits of planes not yet dreamt up.

2. Boeing 737 Max Debacle: The Dumpster fire that has been the story of the Boeing 737 Max following the horrific crashes of two of the planes just months apart almost two years ago now, heated up to white-hot temperatures in 2020. That’s because details of the process, whereby Boeing worked with the FAA on getting the new model certified, came to light and it became clear that both sides failed to do their jobs to make sure the plane was safe upon delivery. Missteps included, but were surely not limited to, everything from aeronautical and software design, to bewilderingly bad certification process errors and the failure to properly train the crews who would be flying the plane, all of it leading to the crashes and the worldwide grounding of the plane for 20 months. As the year was ending, one positive note: The Max was beginning to return to service.

1. The Pandemic. The top story of 2020 is a surprise to no one. It’s the novel coronavirus pandemic that swept across the globe starting in China in late 2019, extending throughout 2020 and beyond. The disease brought on by the virus, COVID-19, has killed millions worldwide and more than 300,000 in the United States alone, with more than two million sickened by the disease. The impact on aviation has been devastating. With passenger loads down by as much as 70% throughout much of 2020, and worldwide airline profits down by half a trillion dollars year over year, the pandemic was devastating to airline travel industry. In GA and especially in light GA, the effects were far less devastating. Hours flown, aircraft sales and avionics sales are all way down, but nothing approaching the level that airline flying has suffered. Our saving grace in this case was our small size. When you’re flying a small plane with people you know, often, people you live with, the risks of transmitting Covid-19 are close to zero. That doesn’t mean the pandemic didn’t affect us. It affected us all and continues to. Here’s hoping that the top story of 2021 is how we beat it and roared back to life.