The FAA has published its Notam for the 2021 Oshkosh AirVenture air show and fly-in, which takes place at Oshkosh’s Wittman Regional Field from July 26-August 1, 2021. The 2020 event was cancelled due to the coronavirus pandemic.

The Notam represents the biggest update to the procedures in at least the last decade, and though the familiar procedures are still in effect for the most part, there are new twists to some of them. The Fisk VFR arrival, for aircraft arriving from the west, for example, has two new waypoints before you get to Green Lake. Presumably, the intention is to make the arrivals less hectic even farther away from OSH than before. 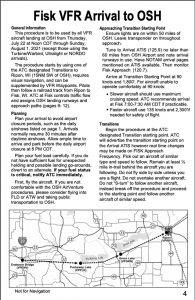 Also, the graphics used to represent the VFR arrivals, for instance, are better conceived and more immediately understandable. The arrivals to the various runways from Fisk are now shaded with the no-fly segments of airspace for that particular arrival. So you can see at a glance both where you’re supposed to be going and where you really don’t want to go.

Because last year’s AirVenture was canceled, the FAA and airshow organizers had plenty of time to work together on the Notam, and it shows. And, as always, if you’re going to OSH for the big fly-in, study the Notam carefully. Some of the things you’ve done a dozen times before might be done in a brand-new way now.