The FAA shared the remarkable opinion that the act of volunteering is by definition receiving compensation, even if no money changes hands. The guidance was in response to challenges to the agency’s flip-flop on the role of instructors in providing instruction in certain categories of planes, including Experimentals.

The FAA announced that the epidemic of unruly passengers aboard airliners is far worse than anyone thought. Between January 1, 2021 to the present day, the FAA has gotten 3,420 reports of unruly passengers, of which it has identified 555 possible violations of FAA regulations and has started enforcement actions in 80 cases.

A passenger aboard a Cessna Caravan turboprop powered single-engine plane reached forward over the unoccupied co-pilot’s seat and pushed the nose of the plane forward in what the man told authorities was suicide attempt. The pilot and passengers restrained the man and the flight landed safely.

STOL Drag Racing events are growing in popularity, and earlier this year the FAA granted the founding organization, STOL Drag Events, national accreditation, allowing for certification of pilots as STOL/Drag proficient and allowing the events to “take their events on the road.”

Billionaire Richard Branson went to space last weekend aboard his Virgin Galactic SpaceShipTwo Unity spacecraft. The two pilots in the craft, which was flown to 50,000 feet by the White Knight Two mothership, flew Unity to around 282,000 feet (or 53 miles high). Three other Virgin Galactic employees went along for the ride, as well.

But many are saying that the flight didn’t really go to space, as the internationally recognized boundary of space, known as the Kármán Line, is almost 10 miles higher. Branson and company are using NASA’s definition of 50 miles or higher, a level at which it awards astronaut wings.

Amazon and Blue Origin CEO Jeff Bezos donated $200 million to the National Air & Space Museum, with $170 million of that going toward the construction and development of the Bezos Education Center. The remainder will go to a museum-wide renovation. Bezos is slated to go to space aboard his company’s suborbital spacecraft next Tuesday.

Redbird Flight Simulations is moving the date and location of its 2021 Migration Flight Training Conference to 2022. It will now take place in Lakeland at the Sun ’n Fun Expo campus in Lakeland, Florida, on February 8-9, 2022.

Flight Design announced that it had gotten the FAA green light to sell its Flight Design two-seat LSA as a completed aircraft. The company will be showing the plane at the upcoming AirVenture fly-in in Oshkosh, Wisconsin, (July 26-August 1).

The NTSB released underwater images of the wreckage of Transair 810, the Boeing 737 freighter that ditched off the coast of Honolulu after losing an engine. The pilots reported that the single remaining engine wasn’t providing enough thrust to allow the plane to maintain level flight. The Safety Board wants to find the black boxes, located amid the wreckage on the sea floor about 400 feet below the surface, to help determine what happened. 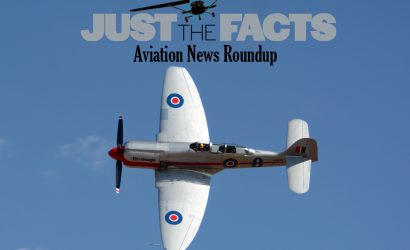