Diamond North America brought the Diamond DA50 RG to Oshkosh this year, and for an airplane that is still technically under development, it had quite a journey to make along the way, all the way from Austria via the North Atlantic to London, Ontario, Canada and then down to Oshkosh. The trip across from Austria took ten legs, Diamond said. The longest of those legs was about 670 nm.

If the plane looks big in photographs, it looks even bigger when you’re next to it. An all-composite low wing, T-tail non-pressurized cruiser, the DA50 RG has as much in common with the back-burnered Diamond Jet as it does with the DA62, the big twin from Diamond that’s made a home for itself among private flyers. The paint scheme, a dark grey that looks almost alien in origin—we think it’s super cool—adds to the presence. It’s a lot of airplane, and it looks it.

Moreover, it feels it, too. The inside, while lacking the third-row seat of the DA62, has a huge seating compartment, in front and in back, and the rear section, converted to a large baggage area, can hold more than 250 pounds. That’s impressive. 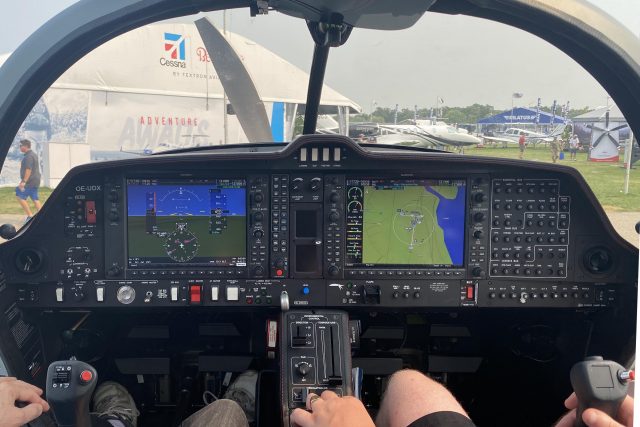 Whereas the DA62 employs two Austro AE330 turbodiesel engines of 180 hp apiece, the DA50 RG makes use of a single six-cylinder Continental CD-300 turbodiesel powerplant of 300 hp. With that power, the DA50 RG can cruise at about 180 knots, which is certainly the kind of speed that potential buyers want to see, but it has a limited range, just 750 nm, about a third less than that of the Cirrus SR22, which is about the closest competitor to the DA50 RG. The amount of fuel the DA50 RG carries is limited, compared to the DA62, because the twin can store fuel in nacelle tanks—there are, of course, no nacelles on the single-engine DA50 RG.

Diamond North America President Trevor Mustard said that while range is a topic that comes up when they speak with potential customers, that 750 nm is a range that is very much in keeping with the kinds of flights that most pilots make when they’re flying cross country. We don’t disagree. At the same time, additional fuel capacity is not only something that many aircraft owners ask for, there’s also a safety advantage to that additional capacity, especially when things don’t go to plan.

Mustard told Plane & Pilot that the plane will return to the Diamond North America factory after the show to refine it even more. He hopes to bring it on a press tour in the fall. We will be ready to fly it when that happens!