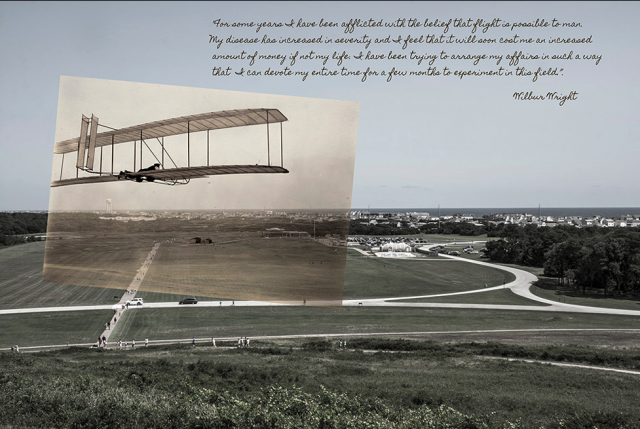 Dayton, Ohio, native Dan Cleary has put together an ingenious collection of photo collages that blend historical photos of the Wright Brothers with the present day, putting Orville and Wilbur, their aircraft (and even Orville’s beloved dog Scipio) into present places around the world where they once worked their aviation magic.

Cleary revisited places in the Wrights’ photos, positioning himself as much as possible exactly where the original, often unnamed photographer captured the shot, so the two images could be overlain very precisely, giving the impression that the old is with us still, ghostlike, and powerfully evocative. The effect is stunning. Cleary, thank goodness, doesn’t attempt to make the blending of then and now transparent. The original photos are overlaid, as though on glass plates or antique photographic paper, with the sepia tone of the originals offering a sense of historical photographs more as records of things past that happened on the same planet and in the same places as we live and fly today.

From the prairies of Ohio to the dunes of Kill Devil Hills, North Carolina, to Paris and back home to Dayton, Cleary’s photographic collages show how much the Wrights went to people here and in Europe to put this startling new technology of aviation before the eyes of the world.

The photographs are accompanied with what look to be handwritten notes, explanations of what we’re looking at, as though the Wrights themselves, or a dear friend with them at the time, were penning the notes.

Check out Cleary’s project at Acurator and experience the Wrights as you never have before.