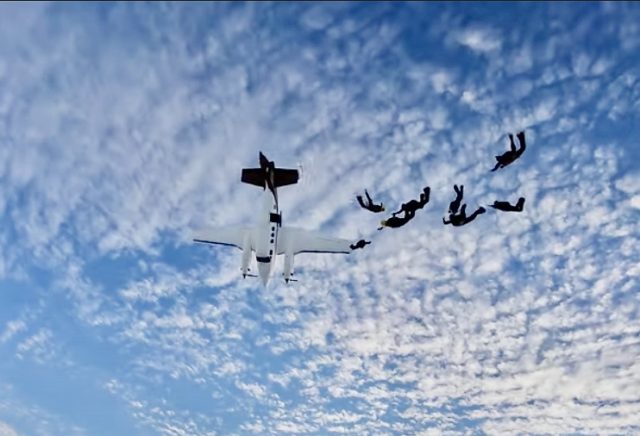 A Beechcraft King Air C90 in South Africa was flying slow at 16,000 feet, ready to drop the nine skydivers who were aboard. The jumpers had climbed out the rear pilot-side door of the plane when it started to go out of control. As soon as they released, it went completely out of control, in a spin, something the C90 is not approved for, and came close to hitting the very skydivers who were seconds earlier had released from the plane.

Amazingly, there were no injuries and the plane landed safely!

“Incident info released for general information and educational purposes to the aviation community by videographer Bernard Janse van Rensburg, with the full knowledge of the drop zone operations. The Beechcraft C90 King Air was trimmed up for the exit procedure at an altitude of 16000’ AGL for the second load of a planned 20x jump event. We opened the door and began the climb out.

As is normal, the skydive team was fully focused on achieving correct positioning and exit timing. This intense focus on task resulted in many of the skydivers missing the tell-tale signs of an imminent stall. From the videographer exit position (outside, most tail-ward end of the jumper line) I felt the plane ‘slip’ once and then twice after which I knew something was wrong and decided to let go of the now banking aircraft. This all happened inside of just a few seconds.

Those on the outside of the door and immediately inside of the door followed. With 9 of us initially in the sky, there were still 5 skydivers inside of the aircraft. The moment was surreal and I could not believe what I was seeing. Everything happened in slow-motion and I remember thinking ‘am I really seeing the plane spinning nose down next to us.’ After the spin, the aircraft started to veer underneath us but luckily did not make contact. As the aircraft started to recover from the stall (still unstable) one further skydiver exited, leaving 4 skydivers and the pilot in the aircraft.

After I was satisfied that the aircraft had recovered (it is a fascinating and unusual thing to see your jump aircraft below you in freefall), I searched the sky for my team and found them building the pre-planned formations in a safe and normal manner.

The aircraft returned and landed safely on the runway. The incident was promptly reported to the South African CAA and PASA national safety and training officer. The next day the jump team made adjustments to their exit procedure following discussion with the pilot and no further incidents or near-incidents were experienced.”