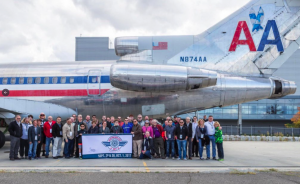 There’s not much that shocks us these days, but when the airport management of King County’s Boeing Field seized a Boeing 727 that was bound for ferrying to the Kansas City Airline History Museum and cut it up, we were hard pressed to believe it was true. But it was. There’s video proof.

Before we start ranting about this, we need to admit up front that the country might have had some justification to take some action. We’ve reached out to them and to the non-profit owners of the plane to get some more background to help us understand why this happened.

Here’s what we know. The 727 had been at the Museum of Flight, but when it acquired the prototype 727 (which is pretty darn cool, we’ve got to admit), its current 727, a 1978 jet that was operated for years by American Airlines, had to go. Great news, though. A Seattle area non-profit called simply N874AA, the n-number of the once proud 727, acquired the jet and arranged to donate it to the Airline Museum. It did need to get it ready for the ferry flight, which with a 43-year-old airplane is no mean feat, and it was reportedly in the process of doing just that when King County apparently got tired of having the 727 on its ramp. It declared it “unairworthy,” though by what power they made that claim, normally reserved for the FAA or a designated representative, seized it and had it scrapped. The entire process, the group N874AA said, took just a day.

So, just as happened in Chicago with Mayor Daly’s midnight raid, the airport management settled the argument with unappealable finality. Some have been bandying about terms such as “power trip,” and we don’t disagree.

Will a lawsuit follow? We wouldn’t be surprised. For now, we remain shocked at the audacity of the unilateral decision to destroy someone else’s property without notice. Might they have had justification to seize the plane? Maybe. We’re awaiting word on that. But to cut it up? We can think of no scenarios in which that was anything but way out of line.