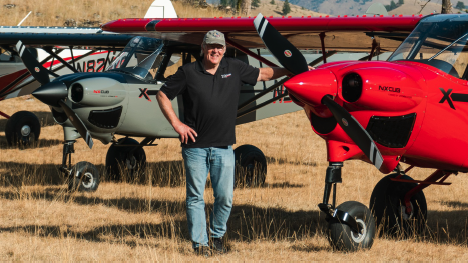 CubCrafters Founder, Jim Richmond, passed away on Sunday (November 21, 2021) at his home in Yakima, Washington, surrounded by his family.  He was 67. While Richmond had retired from day-to-day work at the company, he continued to help guide CubCrafters’ direction until the end.

Richmond avoided the spotlight, but the company he created had a profound impact on the world of backcountry flying, as well as injecting the Light Sport Aircraft segment with a spirit of innovation arguably unrivaled in the world of sport aviation with its introduction of the Carbon Cub 14 years ago. While a true LSA, the Carbon Cub combines great power and performance with rugged construction and classic good looks, essentially offering customers a J-3 alternative that does everything the original Cub did and much more. The model continues to be a popular offering.

Richmond founded the company that would become CubCrafters in 1980, though his original focus was on rebuilding and modifying existing Super Cubs. He began innovating from the outset, earning STCs for modifications that made the planes more durable and better performers. At the same time, that work led him down a new path—toward the creation of brand-new planes.

In its 40-plus year history, CubCrafters has manufactured around 1,500 new aircraft, and it has, according to the company, “rebuilt or restored countless others for customers all over the world.”

The scope of the work is remarkable. Over that time, the team that Richmond built at CubCrafters in the Eastern Washington State city of Yakima created seven different models of certified and Experimental category aircraft, as well as dozens of STC’s. The company’s flagship model, the X-Cub, is a remarkable performer, with the utility of a Super Cub but 20 to 30 mph faster at cruise.

“CubCrafters is truly a family. Our employees, customers, and affiliates all feel Jim’s loss,” said Pat Horgan, current company President and CEO. “In everything we do moving forward, Jim will be with us,” he said, and added that “both Jim’s family and the CubCrafters leadership team are fully committed to continue growing the aviation legacy that Jim started.”

There’s a memorial service to celebrate Richmond’s life the afternoon of December 4, 2021, at the CubCrafters Factory in Yakima, Washington, with details to follow. The family suggests donations to the Idaho Aviation Foundation in his name, in lieu of flowers.