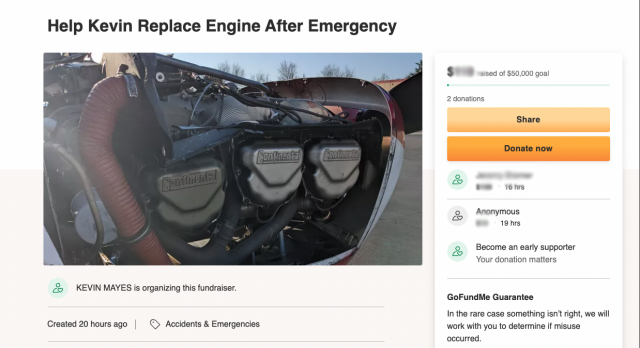 On February 11, a pilot named Kevin Mayes was flying his Cessna 205 on an IFR flight plan from Seattle to Sacramento when the engine catastrophically failed at 9,000 MSL, leaving him only one question to answer: “Where do I put this thing?” At least that was the only question he had to answer during the remainder of the flight. The question that could wait until later: “How will I pay for the next engine?”

Luckily for us, Kevin was rolling a GoPro and shared his airborne ordeal on YouTube. “I think I’m losing this engine. Ah, [expletive]. Engine just popped and I’ve got smoke in the cockpit,” he told Portland Approach, “I need to go somewhere immediately.” Luckily for Kevin, the weather was excellent, and the Portland-Hillsboro Airport was only 6 miles from his nose.

Kevin smartly used lots of help from the ATC controller, who fed him bearing and distance to Hillsboro, along with weather and winds, runway choices and the local elevation. This way, Kevin was able to focus on tasks required to glide to the airport and set up for landing with altitude to spare. The Portland controller also called ahead to Hillsboro Tower where controllers alerted crash response services to Kevin’s imminent arrival.

In the video, in addition to the frozen propeller blade above the cowling, the VSI instrument can be seen indicating a steady descent of 1,000 feet-per-minute as Kevin approaches Hillsboro. Viewers can see his GPS unit painting a magenta line direct to the airport, and eagle-eyes will notice the manifold pressure gauge slowly rising with barometric pressure, since engine intake vacuum is no longer a thing on Kevin’s Cessna. Kevin arrives over the field at nearly 4,000 feet MSL and executes a beautiful deadstick landing.

After the pulse-quickening events of the day reached a successful conclusion, Kevin had to face the sad reality that his insurance policy does not cover replacement of the failed engine, although a forced landing with actual damage to the airframe would presumably have been covered. So, Kevin did what so many people do in the 21st Century: set up a GoFundMe page with a goal of raising the required $50,000 to replace his Continental 0-470-S.