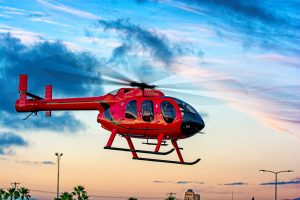 After the 1997 merger of Boeing and McDonnell Douglas, the joke in Seattle was, “McDonnell Douglas bought Boeing with Boeing’s money.” Twenty-five years down the road, we’ve realized it wasn’t much of a joke. What you may not know is how post-merger Boeing handled the remains of Hughes Helicopters, a prized subsidiary of legendary Hughes Aircraft until a Hughes’ Summa Corporation sold it to McDonnell Douglas in 1984.

The short version is that Boeing kept the military side of McDonnell Douglas Helicopter Systems, which held the lucrative AH-64 Apache military business and attempted to sell the civilian side to Bell Helicopter. The latter move was blocked by the Feds, so Boeing sold MD Helicopters to a group of Dutch investors, who sold it to investment fund Patriarch Partners in 2005, which then seems to have gone bust sometime in 2020. The aircraft business, as they say, ain’t easy, despite the brand’s reputation for pilot-pleasing products like the MD 500, a 1963 design with impeccable handling that still sees duty in private hands and commercial service, often supporting high-risk jobs like those of the aerial powerline workers.

This week, Arizona-based MD Helicopters filed for bankruptcy protection while simultaneously announcing its restructuring, and a buyer has emerged in the form of a consortium of creditors led by Barden Hill Investment Partners and MBIA Insurance. Access to financing for the restructuring of MD Helicopters is said to be about $60 million, which should buy the brand some time if nothing else. The purchase and restructuring remain subject to court approvals, naturally.

It will be interesting to see if the new stewards of MD Helicopters plot a path like that outlined for struggling Enstrom: to rebuild as a technical supplier to emerging VTOL and eVTOL makers while supporting the fleet of more than 2,500 MD Helicopters in operation around the world.