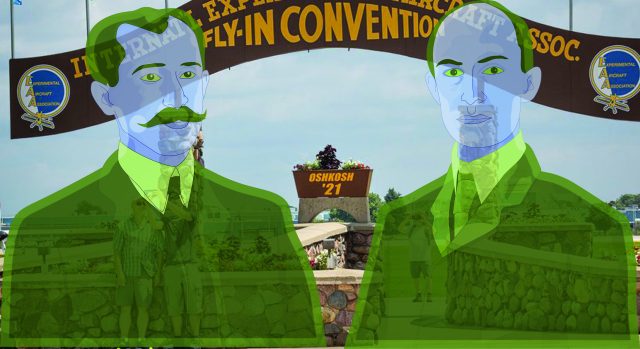 April 1, OSHKOSH- The Wright Brothers will be speaking at this year’s EAA AirVenture Oshkosh fly-in at a special edition of the Fireside Chats at the Theatre in The Woods on Tuesday evening. Of course, the actual Brothers Wright (Orville and Wilbur) won’t be able to make it, since they have both long since flown west. To solve that issue, EAA has partnered with Hollywood special effects firm Comeback Productions to create holographic representations of the brothers.

According to show producers, Orville and Wilbur will be weighing in on their legacy and much more, though they will not, for obvious reasons, be taking questions from the audience. Exact topics are being kept secret for the sake of surprise, but we have been made privy to a couple of subjects including, what they would have done things differently (think Rotax, think BRS), how they should have put the tail “in back where everybody knows it should have been” and getting the pilot “a freakin’ chair to sit in.”

Preceding the appearance of the Wrights will be a mass fly-in of Wright Flyers. EAA is still working out the details, but it expects nearly a hundred of the antiques to arrive the day before the event begins, though it admits that number is “kind of a wild guess.” When it comes to the landings, an air operations person at Wittman Regional, where AirVenture takes place, told Plane & Pilot that the Flyers would be cleared to “land on, near or within shouting distance of any color dot they can manage.”

There will also be Wright Flyer-related forums, including “Ailerons, What the Heck are They?” “112 Feet is So an Actual Flight,” and “Why We Didn’t Facebook Live the Flight at Kittyhawk, So Stop Asking.”

EAA Oshkosh AirVenture gets underway this year starting on December 3, 1903. Hope to see you there!