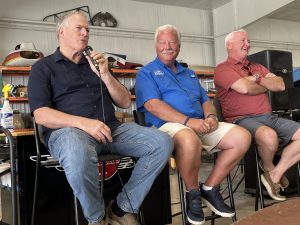 At Sun ’n Fun 2022, the heads of three general aviation member organizations discussed the potential pathway to a 100LL avgas future—a future, they all seemed to agree, is likely to start in 2030, a date that will be mandated most likely by the Environmental Protection Agency, and about which aviation authorities are likely to have little-to-no say.

The discussion was framed by outgoing Sun ’n Fun head John “Lites” Leenhouts who wasted no time in proposing, perhaps not directly, that GA groups band together to fight the banning of 100LL, which could greatly negatively impact the industry. “If they reduce the availability of it, people are going to be pushing the envelope…and it’s only a matter of time before someone runs out of fuel,” Leenhouts said, “It will just happen more often, and we can’t let that happen.”

President and CEO of EAA Jack Pelton then wasted as little time in correcting the notion that GA had any say in the matter. “This is an international problem, it’s not just the U.S. alone….The removal [of lead] is an issue that will affect the entire world,” Pelton stated, responding to Leenhouts that “fighting” the end of 100LL is a train “that has absolutely left the station.” The determination could come, possibly this year, he said, when the EPA issues an “endangerment finding.”

This will lead to a rulemaking process, nearly identical to how aviation rules are promulgated, that will establish a timeline, most likely, he said, by the year 2030. Federal agencies often begin required adoption of rules on the first day of the year. If that comes to pass, aviation has seven years, eight months and 26 days until 100LL goes away.

“The clock is ticking,” Pelton added. “It’s a very complicated problem…. A lot of people ask me about the process of finding a fuel, and I say, that’s [just] a piece of it. You still have distribution, you still have storage, you still have [the question of whether] petroleum companies will step up and make it.”

AOPA president and CEO Mark Baker concurred with Pelton about the complexity of the issue, saying, “We don’t want to be the last [industry], general aviation, putting lead in the air, but we are. We would have liked to have [had] solutions 20 years ago, but there’s simply not been a drop-in solution that’s competitively priced and available now. There might be, pretty soon,” he said, “and we’re big advocates for that.” But Baker emphasized, based on industry workgroups, that “no later than 2030… we will no longer be selling or distributing leaded fuel in North America.”

Baker put things in perspective by laying out the small market, relatively, that Avgas represents. “We use about 180 million gallons of avgas a year, which is equivalent to three or four hours of car gas [there are 8,760 hours in a calendar year].”  It’s a tiny market, and Baker emphasized that the process of moving to an unleaded fuel has to be reasonably profitable to the refiners.

Perhaps the most chilling note of the roundtable was Baker’s reminder that there is just one facility in the world, in Liverpool, England, that makes the lead that goes into 100LL, and there is no guarantee that it will continue doing so for any predictable length of time. Baker thought it “very unlikely” that the product would continue to be made over the next five to 10 years, and punctuated the subject by saying, “We have a lot of things stacked against us, and the thing that I am most concerned about today is keeping low lead available until we find a solution.”

And he underscored the criticality of the issue, pointing to airport authorities in California who have banned the sale and distribution of 100LL at their airports, expressing concern for the safety ramifications were pilots to be tempted to use unleaded fuel in higher- horsepower engines. “Thirty percent of our airplanes,” he said, “burn about 60% of our gas,” making clear that the need for a viable 100LL replacement is not a niche problem but one that is central to the vitality of general aviation.

GAMA president and CEO Pete Bunce said that refining higher-octane unleaded fuel is possible but expensive, and he repeated his concern that a replacement fuel (or fuels) be a drop-in replacement for 100LL, suggesting that it is something aviation needs to do before 100LL goes away.

When asked about the process for approving new fuels, Bunce said that the it would be no different from how fuels are now being approved—through industry consensus standards, such as ASTM or SAE. He seemed to be confident that once a suitable fuel is developed, its adoption would not be as big a hurdle as the actual development of that fuel.

Bunce repeated that, ideally, the solution might be the development of multiple fuels, as competition tends to help drive prices down, but clarified that the fuels would have to be universally compatible with each other, as pilots fly across multiple parts of the continent and are certain to use multiple fuels along the way if those fuel types are regionally distributed.

In response to a question from Plane & Pilot about the potential cost differential between 100LL fuel and a 100LL replacement, AOPA’s Baker said, “We don’t have total visibility into that,” but added that, “if we do have a fuel that is fungible, that is, can be dropped in any tank, can be hauled by any truck, can be delivered across the country, perhaps in pipelines…there’s a potential long term for it to be a lower cost.”

But whether such a future will arrive or not remains to be seen. As Bunce pointed out, the process of this changeover to unleaded fuel is a complex one, with the need to develop the fuel, approve it, get refiners to produce it and get it distributed all part of a long process.

And, the three leaders agreed, the time is short to get there.