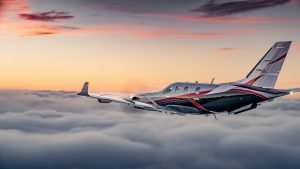 On the opening day of Sun ’n Fun 2022, Daher unveiled the latest iteration of its TBM series, the TBM 960. Equipped with a Pratt & Whitney Canada PT6E-66XT engine and a slew of upgrades, this model is a logical progression of a design long noted for speed and innovation.

“The TBM 960 is the quintessential TBM, representing the fifth evolution of our very fast turboprop aircraft family since the TBM 900-series’ introduction in 2014,” commented Nicolas Chabbert, the Senior Vice President of Daher’s Aircraft Division. “It takes the maximum advantage of today’s turboprop technology to provide digital control of the engine and the propeller.”

The combination of the PT6E engine and a five-blade Hartzell Raptor propeller makes for a powerful, efficient and quiet power system. Combined with a dual-channel electronic control system, the TBM-960 offers single-switch automated engine starts, simplified operation and a 74.6-decibels at takeoff power. At Daher’s recommended 308-knot cruise speed, a 57 gallon- per-hour fuel flow offers a 10% improvement in fuel economy over prior designs. 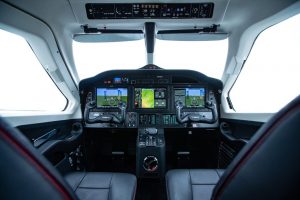 In addition to existing avionics in prior TBM models, the 960 incorporates the Garmin GWX 8000 doppler radar. In the cabin, a new environmental control system, LED ambience lighting, dimmable windows, USB outlets and redesigned seats give benefits to the passengers as well.

A distinctive scheme, Sirocco, is available for the aircraft.

Certification is underway with the FAA and EASA, with deliveries expected to begin during the first half of 2022.