The National Transportation Safety Board (NTSB) last week issued a safety recommendation as part of its investigation of the July 31, 2020, midair collision over Soldotna, Alaska, that killed all seven people aboard the two planes, a Piper PA-12 Super Cruiser and a De Havilland DHC-2 Beaver. The cause of the crash, according to the NTSB, was the failure of the two pilots to see the other plane and take appropriate evasive action, along with the lack of a requirement for traffic awareness gear that has audible warnings. 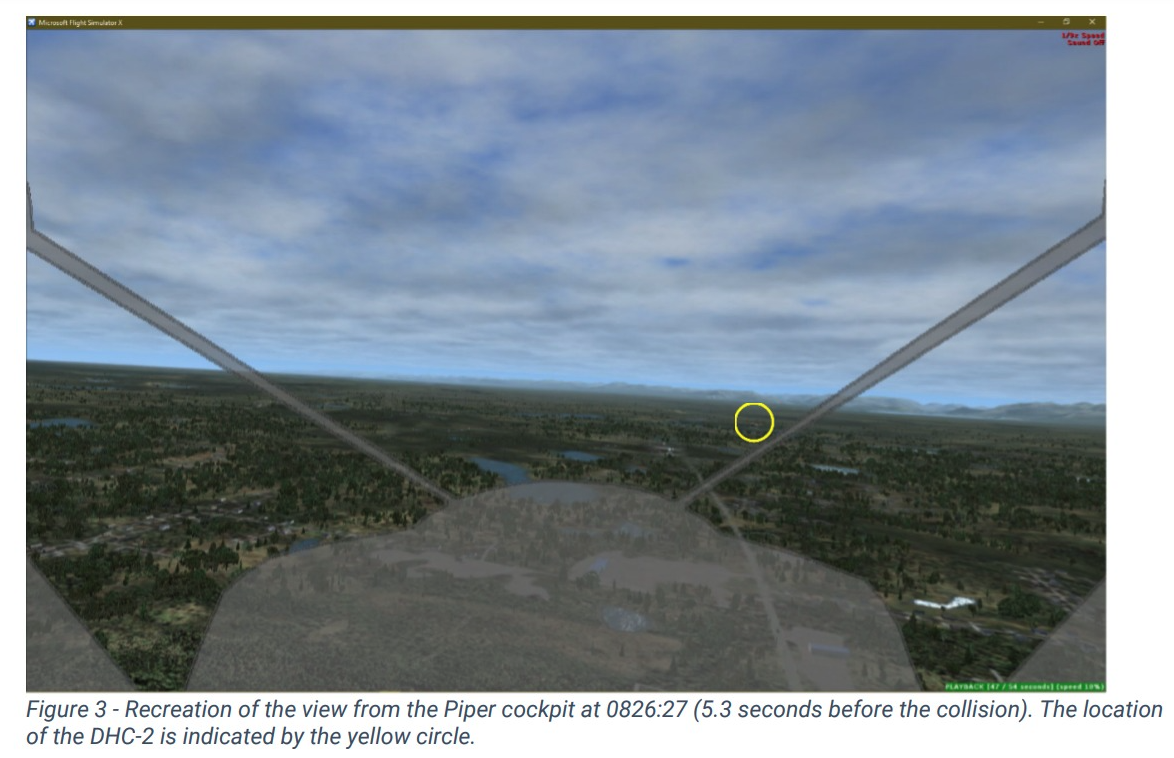 As part of its investigation, the NTSB conducted a simulation of the views each pilot had of the other plane before the collision. The study found, “…that for the 53-second period before the collision, the PA-12 would have been unobscured and visible to the DHC-2 pilot through the DHC-2 left windshield. The DHC-2 would have been unobscured and visible to the PA-12 pilot through the PA-12 windshield for 28.3 seconds before the collision. Federal Aviation Administration guidance indicated that 12.5 seconds is the minimum time for a pilot to visually acquire another aircraft, judge a collision course, and take evasive action. Therefore, there was adequate time for both pilots to see and avoid the other airplane.”

The recommendation seems to acknowledge that the common collision avoidance technique known as “see and avoid” has limitations. Indeed, in this crash, investigators determined that both pilots should have been able to see the other plane, which would have allowed them to take evasive action to avoid a collision. That didn’t happen in this accident. In fact, eyewitnesses indicated that the two planes continued with their respective flight paths, the Beaver heading west and the Super Cruiser traveling to the north, each at the same altitude of around 1,175 feet MSL, until they collided.

According to the report, “A witness located near the accident site observed the DHC-2 traveling in a westerly direction and the PA-12 traveling in a northerly direction. He stated that the PA-12 impacted the DHC-2 on the left side of the fuselage toward the back of the airplane. After the collision, he observed what he believed to be the DHC-2’s left wing separate, and the airplane entered an uncontrolled, descending counterclockwise spiral before disappearing from view. Both airplanes sustained substantial damage during the collision and impact with terrain.”

In looking into the pilot’s certification and history, the NTSB found that the pilot of the PA-12 had been turned down for an FAA medical certificate eight years prior to the accident due to “open-angle glaucoma” and “severely limited peripheral vision.” Investigators postulated that the PA-12 pilot’s central vision was likely significantly impaired, too.

The safety recommendation is for the installation of ADS-B traffic awareness and alerting gear for Part 135 (on-demand charter) operations. Neither plane had ADS-B installed, but if they had, investigators found that the pilot of the Super Cruiser would have gotten traffic alerts 26 seconds before the crash and another one nine seconds prior to the collision. The DHC-2 pilot would have gotten alerts at 26 and 19 seconds before impact.

According to a story on Alaskapublic.org, there were 14 midair collisions in Alaska between 2005 and 2020, resulting in 35 fatalities and 15 injuries that the NTSB classified as “serious.” Of those 14 midair collisions, the site reported, 12 of them took place in uncontrolled airspace, as was the case for this mishap.

The NTSB found that the probable cause of the accident was, “…the failure of both pilots to see and avoid the other airplane. Contributing to the accident were (1) the PA-12 pilot’s decision to fly with a known severe vision deficiency that had resulted in denial of his most recent application for medical certification and (2) the Federal Aviation Administration’s absence of a requirement for airborne traffic advisory systems with aural alerting among operators who carry passengers for hire.”