It was a routine flight for the 1990s: hop in the Alaska Department of Public Safety’s unmarked Cessna 185 on straight floats, take off from Hangar Lake in Bethel, and head north for the Yukon River under overcast August skies. Since the only cargo was an outboard boat motor for the Saint Mary’s Post’s Boston Whaler, I’d topped off both tanks with av gas that morning. No special technique was required to break the surface from the relatively short waterway with 300 horses under the red and white cowl. It was my morning off, so I’d skipped donning the uniform—jeans and a chamois shirt were much more suited for manhandling a heavy, greasy engine in and out of the seaplane.

My old friend Trooper Dave Aspelund met me on a muddy shore in front of Saint Mary’s. Having won the wrestling match with the Johnson to get it out of the plane and onto the beach, Dave and I began catching up on family and local events when his portable radio squawked. Saint Mary’s second Trooper was requesting a one-way “ticket” to haul a prisoner back to Bethel. “No problem,” I answered, as it was part of the job. A few minutes later, the Trooper led a rather large Alaska Native man down the river bank. Turns out, the prisoner had shot up the village the night before but was now sober enough to be transported to the Yukon Kuskokwim Correctional Center in Bethel.

Introducing myself, I asked my new traveling companion his name. “Henry,” he grunted. That’d be the only word I’d hear from my passenger for the rest of the trip. From what I’ve observed, some villagers are just reserved—except when speaking to another villager in their native tongue—and others have a deep dislike of law enforcement. Village residents were used to traveling by small plane, as it was the easiest way to get to the Bethel—the hub for 54 villages in the area—and there were no roads across the tundra. Henry didn’t hesitate to climb into the right rear seat of the Cessna, and he didn’t seem to mind being shackled with his handcuffs to a cable in the floor. He was certainly much more polite than he must have been the night before, with a bloodstream full of home-brew and a semi-automatic rifle in his arms. This should be easy, I thought.

The takeoff run seemed a little longer than usual, but all else appeared normal as the 185 clawed into the sky from the turbid Yukon River with the big EDO 3430 floats. It was when making the usual flyover to wing-wag goodbye to my fellow Troopers the first notice of a problem came to light. “Hey, Mike, is water supposed to be gushing out of the float?” Dave’s pointed question on the police radio was cause for another pass, this time much lower.

“It appears there’s a rip, about a foot long, on the bottom of the right float. Must be from the bulldozer.” Bulldozer? I think I would have noticed one, but before I could ask, Trooper Dave added: “After the military built the airport, they dumped some equipment in the river, including a bulldozer. Maybe you hit some scrap.”

Here was the dilemma: We were loaded with fuel, a large passenger, and there was a sizable, jagged tear in the bottom of a float. The primary concern was the protruding aluminum could dig into the water surface on landing, resulting in a plight similar to an amphibious landing with the wheels down. If the plane flipped, not only would I have to get myself out quickly, but also there was a shackled prisoner in the back to worry about.

The two most important things to ponder were where to land and how to land. The landing spot needed to be where I could get help, and the method needed to result in not catapulting across the water.

If this incident had happened later in my flying career with more hours in my logbook, I might have considered landing on the grass next to the Bethel Airport’s short runway. Even on a hard surface, the 185 would have most likely kept upright, and emergency crews could easily respond, but back then, I was thinking only of liquid runways.

Options for water landings included the lake I’d taken off from that morning, but the shoreline was swampy, and it was a long drive down a bumpy road—not good for rescuers. The river landing area in front of town was rough with a fast current, maybe even a worse choice. The focus narrowed to a little pond on the approach end of the main runway at the Bethel airport, which featured a gravel ramp. Named H-Marker Lake, its diminutive size makes it best suited for Cub-type seaplanes. I did the math in my head, and it could work, but only if the approach and landing were spot-on. Since it was good VFR, I had plenty of time to circle for both planning and to burn fuel out of the right tank.

Fortunately, the 185 had a high-tech feature for those days—an in-panel “telephone” that used the federal government’s system of HF repeaters strategically placed on mountaintops across much of Alaska. Even though it was a Saturday, and the only maintenance shop on the airfield was closed, I called. Luckily, the owner, Rob, answered. My question was simple: “Do you have flatbed trailer?” Turns out, Rob had an empty, extra-wide snow machine trailer in his hangar, and he offered to tow it to the lake. Since this was before cellphones, we agreed to communicate on an aircraft frequency for the rest of this adventure.

Flying in a big pattern for over an hour at full power, and full rich, burned fuel to lighten the right side of the plane as much as possible. Henry remained silent, gazing over the tundra as a scent of alcohol, fish, woodsmoke and sweat drifted from the back to the front of the cabin. The Bethel tower operator offered plenty of space to maneuver over the approach zone to set up for landing on the pond, so several turns were made over the little dot of water. The slick line on the shore gave me a good indication of the wind, which was confirmed by the airport automatic weather report to be about 10 knots from the north—the most favorable direction one could hope for, as it lined me up for the ramp.

Quickly answering my radio call, Rob had parked his truck with the trailer by the ramp. Our aerial circuits had provided plenty of time for devising a wild scheme, and now I needed to drag the mechanic into it. Since the ramp was steep and the rip was in the center of the float, there’d be an issue if I simply did a normal water landing and hoped to step taxi onto it. If it didn’t flip, the plane would probably sink to the right side once power was pulled. “Rob, could you back the trailer into the water, so I can drive onto it?”

Lowering the wide trailer into the murky water such that just the truck end of the deck was showing, Rob didn’t question my transmission or the concept, as he must have known what I was planning. Smartly, he then abandoned the truck for safer ground above the lake to join the crowd who had now assembled and was most likely placing bets on the outcome of this little airshow. Enough time-killing and planning; it was time to land.

“Buckle in, brace for impact, and be ready to get out of the right door,” I yelled to my passenger as I unlocked his handcuffs, freeing him from crouching over the seat. Next, I directed him to the seat behind me to further lighten the right side. With a poker face, Henry nodded and slid behind me as the prelanding checklist was completed.

Like any short lake landing, the goal is to touch down as close to the shore as possible, but this one had to be a little different—instead of immediately cutting power and dropping the flaps and stopping quickly, I’d need to keep on the step. The trick was the step could only be on the left float, as the right float would need to be held out of the water. Landing on the short and narrow tundra village strips had provided some extra experience in crosswind landings, so I had a pretty good feel for keeping a wing low on landing, but this would take it to another level, especially since there was no crosswind.

With permission from the Bethel tower, I made a low approach next to the main runway line up for the lake, and, after a final prelanding check, I set up for what was similar to a glassy water approach. As I dragged the Skywagon over the tundra, the pond looked small, really, really small. I set the nose a little above the horizon, dipped the left wing, gently adding power as needed for a smooth touchdown. It seemed I was traveling in slow motion as the last hump in the brown tundra disappeared under my float. I reduced power. As the left float made contact, a little throttle was added back to not only keep on the left float’s step but to keep the right float from touching the water. All of my focus was on the trailer — the timing would have to be just right. If I cut the power too soon, the right float would drop and grab the water surface. If the power was not pulled back soon enough, we might end up overrunning the trailer and smashing into the parking area.

I’m not God’s gift to seaplane pilots, not even close, but that was my lucky day. My water-run must have looked weird from the shore, with the right float doing a “wheelie” and the engine rumbling.

Luckily, I chopped power at exactly the right time, allowing the floats to slide onto the trailer just as the right float dropped, resulting in a sudden stop like from the arresting gear on an aircraft carrier. After all systems were off, mechanic Rob, accompanied by a Bethel Trooper, jumped on the trailer and tied the floats down.

“That worked out well,” Rob offered.

“Why didn’t you use the big lake?” The nonpilot, uninformed Trooper wasn’t impressed with my landing.

Shrugging off both comments, I led my prisoner to the waiting Trooper truck for his short road trip to the jail facility. After helping him into his seat, Henry finally spoke: “Trooper, when I get out of jail, I no want to ride back to the village with you!”

Henry must have assumed that was standard water landing procedure for me, unaware of our little emergency. I didn’t correct him, as now he had something to talk about with other villagers during his extended stay in the correctional facility.

A takeaway from this tale is seaplane pilots can reduce their risk for a similar incident by thoroughly checking out the operational area they will be using. In this case, a flyover to preview the beaching area wouldn’t have helped, as the Yukon is full of milky silt, which does a fine job of hiding what lurks below the surface. However, asking the right questions of the locals—in this case, Trooper Dave—would have made me choose a better beaching area to save damage to floats and a possible disaster. Or course, then Henry would have had a less exciting day in the bush and a more boring stay in jail.

Read more about seaplanes with “Plane Facts: Seaplanes” and “Learning To Fly Seaplanes.”

Want more Lessons Learned columns? Check out “Flying With A Recluse Spider Onboard.” 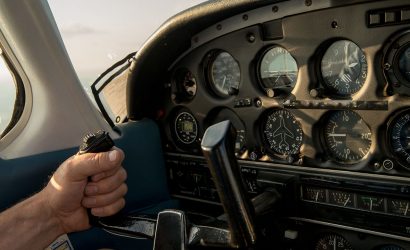