Checklists are an essential link in the safety chain at all levels of aviation. The checklist, like any success story, has many parents. However, the 1935 crash of the Boeing 299, the prototype of the legendary Boeing B-17 Flying Fortress, is generally regarded as a key turning point. The 299, with a crew of five on board, crashed shortly after takeoff due to the pilot’s failure to release the gust locks, killing the pilot and a second crewmember. This innovation protected the tail surfaces from wind damage while parked by locking the elevator and rudder. Thankfully, the accident did not spell the end of the B-17, but it did highlight the need for a pre-takeoff checklist to ensure that these increasingly complex airplanes were operated safely.

Flash forward to today, and checklists come in numerous shapes, sizes and formats, some good and some bad. Unfortunately, in the spirit of more is less, many modern general aviation checklists appear to have been written as much by the legal department as by flight operations. The military suffered from this issue a few years back. Every time an accident or incident occurred, especially one involving the unfortunate loss of life, it would surely be followed by what the aircrews
dubbed a “posthumous technical order change.” This would add several pages to the military equivalent of the POH and several steps to the checklist.

The end results of decades of these changes were incredibly large manuals and checklists. It got so bad at one point in the 1980s that the U.S. Air Force dictated that all regulations (and in the military, a checklist is considered a regulation) would be reduced by one-third. This resulted in shorter, cleaner and more effective checklists as well as lighter flight bags to lug around. And, as it turned out, no decrease in fight safety.

“Unfortunately, in the spirit of more is less, many modern general aviation checklists appear to have been written
as much by the legal department as by flight operations.”

Well, the airlines had a better idea. While military of the 1980s embraced the traditional challenge and response system, where the co-pilot prompted the pilot for each response, the airlines turned to the checklist flow concept. In this strategy, each pilot has a unique memorized “flow.” It usually starts in the overhead panel, then flows to the pilot’s instrument displays, center engine and systems displays, and ends up down on the center console. This check is done in a logical sequence from memory. Then, it is immediately followed by the recitation of the checklist’s items (from a simple one-page paper checklist) by the first officer/pilot not flying, with responses from each pilot. This system of checklist flows places the items to be checked in a logical sequence and develops a strong habit pattern that contributes to accuracy and efficiency. As airline cockpit design has advanced, instrument and systems panels have been optimized for the flow concept. Watching a modern airline crew conduct their flows is like watching a well-rehearsed symphony.

So how does this apply to general aviation pilots? Glad you asked. The checklist flow does not replace the printed checklist. Rather, it allows the pilot to efficiently check all the required items for each phase of flight, then refer to the checklist to recheck that each item is complete. It is especially valuable for pilots who fly a variety of aircraft on a regular basis. Developing a flow pattern in the cockpit allows the pilot to efficiently review each of the required switch positions and configurations, then back it up with the written checklist. So, what might a general aviation flow look like?

Again, this system is especially effective if the pilot moves from one aircraft to another on a frequent basis. It develops a consistent habit pattern. And the follow-up with the actual checklist gives that critical second look that develops confidence that the aircraft and pilot are ready.

Checklists come in a variety of formats. A popular Missionary Bush Pilot YouTube series combines checklist flows with a small rectangular box on the glareshield, which contains eight toggle switches. Each toggle has one label above and a different label below each switch. All switches in the “up” position signify ready for take-off. All switches down, ready to land—really helpful for the stressful life of the masters of backcountry flying in New Guinea.

Many glass cockpit displays, as well as popular iPad apps, contain a variety of checklist formats. And there are some nice laminated checklists out there that use the empty space on the instrument panel to key the pilot to the critical items required for takeoff, climb, cruise, descent and landing. Each of these works well with checklist flows.

Whatever type of checklist, personal style or aircraft you fly, consider adding the checklist flow concept to your set of habits. If you get a chance, check out the numerous posts on YouTube to see how airlines and your general aviation colleagues use flows effectively. If you fly multiple aircraft types, this technique can be a lifesaver and a time saver. And whatever you do, make your insurance company happy by always completing a “GUMP” check before each and every landing! Landing gear down, three green and checked. Fly safe and enjoy the ride! PP 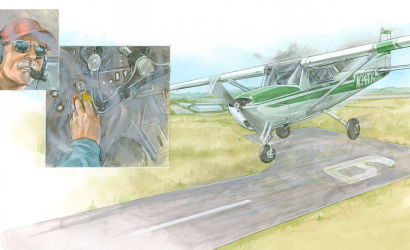 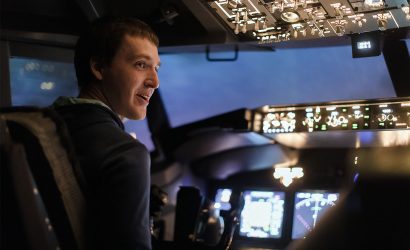