For years, the Cessna 206 has been called the flying SUV, and for good reasons. It’s rugged, can take a good load, and does, indeed, serve as a utility vehicle, carrying good loads of both people and cargo. The Cessna 206 has proven its mettle around the world. And in my company, at least, it fills in a rather unique role, that of a corporate plane. After operating a Piper Chieftain and a 172, I found the 206 has proven more than capable of doing double duty, transporting people, cargo and everything in between to points within 100nm of our home base in the Southern Philippines. It’s reliable, and its simple operating economics make it the best choice for our needs. And as a pilot, I find it is an honest, dependable, rugged and fun airplane to fly.

It was a cold, rainy day sometime in August many moons ago when my schedule called for me flying multiple legs within our network, shuttling people around all day long. This is my kind of flying—more time in the air and less on the ground in comfortable weather. It might not have been sunny, but with a 10,000-foot overcast in light, drizzly rain with absolutely no wind and turbulence and visibility for more than 50 miles, it was an absolute delight. I started my day at 0700 and was expecting to be done by 1300. I could feel my steed was satisfied as well as she hummed in the air with the ever-present Cessna “singing struts” as what rain hitting the leading edge of the wing struts does—couldn’t be more pleased with the best job in the world for me.

As more and more of my legs got completed that day, I was given word during my last trip before returning to base that 12 boxes filled with bananas would accompany me back, as there were no passengers to fly with me anymore. I work for a banana export company, and we have several farms scattered about, so the plane is, indeed, a necessary asset.

As a bonus for that haul, the farm manager said that one of those boxes was for me to take home. I tell you, I’ve never been worried about having too many bananas until I saw how many are in one box and the added challenge of consuming them before they all get overripe! Going bananas over bananas is perhaps a proper way of putting it. Nevertheless, it was free, and I shared the blessing with friends and neighbors, who all were pleased at getting export-quality fruit that would have not otherwise been available locally.

So, after the last human cargo deplaned, I loaded up on the more delicate produce that can sometimes get more attention and nurturing than a human baby! After all, this is also the reason for our company’s existence, for my job and for the airplane, so it is indeed precious cargo.

With rain still lazily coming down in a steady drizzle, I pushed the throttle on my trusty 1982 U206G, and all the might of the IO-550 engine and the McCauley prop clawed on every available molecule of air from our high-elevation airstrip, and off I went. I was looking forward to a fruitful (works both ways, right?) end to my long day and a long weekend with no schedules for the next few days.

As I was steadily and confidently climbing to my cruising altitude of 7,500 feet, I could feel the sure-footedness of the IO-550 and the poise of the airplane as I headed toward the first valley crossing out of the farm. This was going to be a 35-minute, 62-nautical-mile flight through lush green forests and sprawling fields. This is a sight I will never get bored of, and I hope global progress will not change the way these last vestiges of Mother Nature look.

Settling in at cruise and taking a deep breath for a job well done (and thankful for the chance to experience all of this), I noticed out of the corner of my eye some movement off of one box strapped on the co-pilot’s seat. It sure looked quite large for our company logo and was not as colorful. A momentary distraction from a radio call diverted my attention but as I clicked on the mic, that “logo” definitely moved!

I didn’t want to believe it, especially since I was alone in the plane and bananas are not known to have any means of mobility, so I was hesitantly beginning to admit that it was some live creature that somehow hitched a ride!

After all day flying multiple legs, what a better way to end it than having someone with eight legs cap it off. I was staring, about 2 feet or so from my face, at what looked like an adult Brown Recluse spider! Locally, they are called tapayan, and no one, to my knowledge, has made any official association to its North American cousin. But they sure look very much alike in appearance and size (it pretty much was as wide as my hand with all its legs splayed out). Perhaps this is its sunburned, beachgoing cousin. Whatever it is, I don’t care, and as a certified arachnophobe, it was definitely an unpleasant sight! Any spider bigger than a thumbnail is cause of concern to me.

So here I was, 42 nm from home in great flying conditions, having a faceoff with a spider. It was the longest 42 nm in my life. I remembered one passenger left a roll of newspaper in the backseat, so as I slowly reached for it and shifted my gaze to my chosen “weapon” to whack it (while shaking in fear), the stowaway vanished!

These spiders, while large, are known to move at the blink of an eye, and God knows where it could have gone this time. Would the airplane and the cargo and I all be lost because there was a spider in the cockpit? I couldn’t lean back on my seat since it might be there; I kept looking around since it could be anywhere, and I just prayed that the saying that spiders are just as afraid of you as you are of them was true because I think I was more scared of him than he was of me.

Being in a major city with a lot of airline traffic, I heard more and more radio chatter clog the frequency as I neared our home airport, and due to the dilemma I was in, I was at one point wondering if I should request priority for landing. But how absurd a reason is it to have a spider in the cockpit as a cause? I don’t talk spider, so I was just thinking to myself that wherever he might be, he better stay there until I jumped off the plane (when already parked, of course).

To add insult to injury, as I joined downwind for Runway 05, I was told to make two circuits in the hold for one departing and one landing traffic. The gods must be crazy! Why me? Nevertheless, when it became my turn, I asked for a short approach, got it and taxied as fast I could to our hangar. As I shut down, I did not forget my end of the bargain with my spider companion—I jumped off the plane, and the ground crew, knowing of my fear, almost immediately knew what it was about and started laughing.

Something good came out of this encounter, though—it somehow made me braver and bolder when confronted with large arachnids or otherwise distracting turn of events. There were many choices available to me in dealing with it, and losing my wits and professionalism was certainly not among them. Fly the airplane, fly the airplane, fly the airplane! So, this time around, it’s mind over matter, and my subsequent encounters with these creatures emboldened me to “solve” them quickly, either for the spider or me. If he stays long enough within reach of whatever implement is available to me, I will use such object as a weapon; getting rid of one of them will not make them to the endangered species list anyway. If he is out of sight, at least for the time being, he is out of mind, and I can press on with the task at hand.

Thankfully, I made it back in one piece and all bananas intact with nary a sight of my passenger or its relatives/accomplices (I think he acted alone). I had the ground crew comb the aircraft and my banana box for any sign of Mr. Skinny Legs, and they never found him…maybe he just wanted a ride in an airplane. And, oh, people at the farm now know that whenever they send cargo with me, they better make sure there is no live creature with it!

P.S. After relating the incident to the farm manager, I found out that the boxes were already at the hangar in the early morning since they do not know my exact ETA. It was during that time that Mr. Skinny Legs must have found his way into the box through the breather holes. He must have come from the surrounding foliage.

I hope he lives a good long spider life, far away from me and my plane!

Read more about animals on planes with “Managing The Risk Of Unauthorized Animals On Board” and “Deadly Snakes Love The World’s Biggest Plane. Enter The Whacking Stick!” 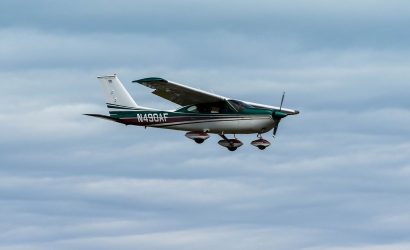 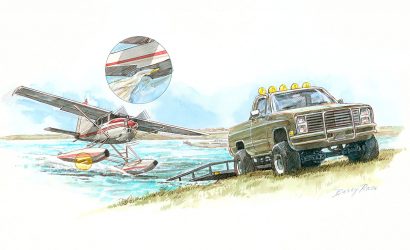 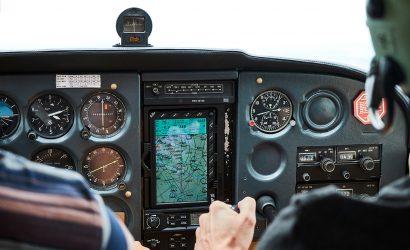