A few years ago, I was involved in a local chapter of an organization that is into preserving military aviation history, originally World War II stuff. Our chapter had two Stearmans, a PT-19, three L-19 Bird Dogs, an L-4 Grasshopper (Piper Cub variant), an L-2 Grasshopper (the Taylorcraft version) and my old Aeronca Chief dressed in Civil Air Patrol colors.

I didn’t think my Chief really fit with the “in crowd,” as the L-birds were that cool shade of olive drab, and the Stearmans with the round engines were navy trainer yellow. With the Chief—civilian white with CAP markings—I felt like I was wearing a Beach Boys shirt at the Sturgis Bike Rally, where everyone wears black, wearing gloves with the fingers cut out, leather vest, bandanas, etc. You get the picture, right?

Anyway, we were invited to the annual Barksdale, Louisiana, Air Force Base airshow to put our aircraft on static display. The plan was for us to fly in our loose formation (think gaggle) into the Air Force Base at a specific time designated by the air boss.

Now, the two Stearmans were being flown by highly experienced A-10 pilots, the PT-19 by a Korean War Saber Jet combat pilot, L birds by a retired Army captain and Global freight pilot. Me…well, I had been a Boy Scout, so there was that, but otherwise just a regular ole guy with a private pilot rating and about 200 hours of tailwheel experience (including a ground loop) at that time.

We were all to meet at the grass field home base of one of the L birds’ pilots since it was near the Air Force base to wait on the call to depart.

“Notice that I said, ‘up the runway.’ Yup, it’s uphill. So, I rolled to the very end of the strip, knowing full well that I was carrying more than a bit more weight than the 75-hp Cub that just lifted off in front of me. ”

Personally, I was hoping for an early departure because here in the South, density altitude starts being a problem as soon as the sun breaks the horizon. Plus, I had a friend flying with me who was a bit larger than me—about 60 pounds larger, in fact.

So my already-underpowered old Chief and its very tired old C-65 were in for a struggle.

We had already discussed that  I was to be No. 2 on takeoff following the L-4, with the L-2 behind me. We finally received the call from the Air Boss late in the morning, and by then it was good and hot with a crosswind, too. But we all got in our planes—I hand propped the Chief and climbed in. Seat belts on, we did our quick radio check and taxied out. I watched the L-4 power up, its tail lifting right away as it started roaring up the runway, got airborne and climbed on out.

Notice that I said, “up the runway.” Yup, it’s uphill. So, I rolled to the very end of the strip, knowing full well that I was carrying more than a bit more weight than the 75-hp Cub that just lifted off in front of me.

I brought the power in, and we started rolling. As we did, the runway started growing altitude—remember that it slopes uphill. But slowly my tail came up, and I could feel the wings starting to add some lift, taking some weight off the tires before, finally, the airplane broke ground. Unfortunately, the hill still loomed toward us, and in dismay I noticed that even though we’d broken ground, we weren’t outclimbing that dang hill of a runway. This became clear by the wheels touching the near crest of the hill as the ground rose up before us.

Suddenly, we were back on the ground again. Just then, though, the wings started to overcome the weight of the plane—let me think, lift should be greater than weight, right?— and the wheels finally let go of the grass again as I tried to climb out of ground effect, though with no avail.

I could see the trees at the end of the 2,800-foot grass runway approaching (slowly but still faster than most trees), and I noticed that I was having a hard time climbing out of ground effect.

The wind wasn’t helping any, as it came down over the trees crossways to the runway while also creating some turbulence and doing its best to keep me on the ground. Just then, I felt a hint of a climb, glanced at the VSI, and noticed that it was also showing an upward inclination, a slight one but a climb nonetheless.

But those trees. I looked to my left, and there was a small clearing in the wall of trunks and leaves and branches, and I noticed for the first time out of the corner of my eye my friend clutching at the door. Honestly, I think he was considering jumping out, and it didn’t seem a bad idea because at this point, we were not going to clear the tree line ahead. All the while, my brain was calculating the time/distance/climb from the end of the runway where the tops of the trees, which were still higher than us, were and that clearing. It seemed our last hope, so I made the decision.

I banked so gingerly and coaxed the plane to the left thru that clearing that just appeared to clear the trees and started to make a climb. But wait, there’s more!

The clearing was there for that stupid cell tower that now was in front of me about a half mile, just slightly outside the pattern. But we made it past that, too, clearing it laterally with a comfortable margin and altitude to spare. I caught up with the L4, circled once around the pattern, and then we all bunched up and flew our very loose pattern to the base.

My landing was uneventful, except for the Thunderbird pilot who was waiting on me to land. No pressure or nothing, right? But, honestly, that was a cool sight to see, taxiing with an F-16 right behind you.

Later that evening at dinner, the L-2 guy following us mentioned to me that he was watching us struggle while climbing out and was about to shut down and run to the tree line to help pull us out. It was at that moment that I decided to get that old C-65 rebuilt first chance I got.

“The clearing was there for that stupid cell tower that now was in front of me about a half mile, just slightly outside the pattern. But we made it past that, too, clearing it laterally with a comfortable margin and altitude to spare.”

The moral to this story…

Density altitude, low horsepower and max weight combined with an upsloping grass runway should have made me reconsider my plan. After all, there was a seat available in the Stearman for my friend. Plus, there was that darned crosswind spinning down at us from the treetops.

If you land on a 15,000-foot runway, don’t aim at the 1,000-foot markers. The controllers made me taxi all the way to the very end of the runway with the F16 taxiing behind me. Do you know what the takeoff speed is in an Aeronca Chief? It was a slow, very long taxi, and I bet that F16 Thunderbird guy was rolling his eyes the whole way!

But then again, how many of us general aviation folks get to fly into an Air Force base with a civilian plane (legally) and get marshaled into a spot on the same ramp as the Thunderbirds!

We Want to Publish Your Flying Story! 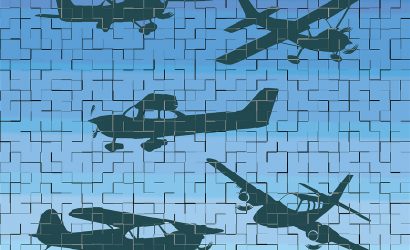 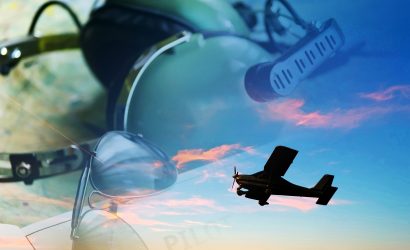