If you thought that canceling Oshkosh AirVenture was a tough call, we agree. At the same time, it seems as though there was overwhelming support for the EAA’s canceling it for 2020. The organization explained its reasons for calling off this year’s fly-in with a May 1st press release that detailed the challenges that putting on such a massive event under social distance orders would have presented.

The guy who’ll be front and center in making that decision for the High Sierra Fly-In (HSF) is Kevin Quinn, one of the most respected people in the backcountry community thanks to his remarkable leadership, and not only because of the success of HSF.

But with the fly-in scheduled for October 14-20 at Dead Cow Dry Lake in the Nevada desert, Quinn is faced with a nearly impossible decision, but one he needs to make, and one that will be disappointing to many regardless of whether it’s go or no-go for HSF 2020.

Part of the complexity of the decision has to do with the demographic of those who attend the backcountry fly-in. While some will bristle at any such generalizations, I think it’s more than fair to say that attendees tend to be libertarian in their core political beliefs, with many, including some who are well known in the community, being openly skeptical of stay-at-home orders surrounding the coronavirus pandemic.

With that being the case, how would they respond to a cancellation?

Well, not happily. After Quinn posted on the HSF Facebook page a thinking-out-loud post saying simply, “Well s*#%, I guess we should start thinking about this…” followed by a smiley face emoji, the responses started pouring in, no one seeming to have the least doubt that the thing Quinn needed to think about was the decision to hold HSF 2020 as planned or to cancel it. The consensus seemed overwhelmingly in favor of of going ahead with the show, though it can be hard to judge based on Facebook responses, as those with the most passionately held views are often first to post their ideas.

That said, the majority made no bones about their thoughts on the subject, with one meme, with the Michael Scott character from the popular sitcom saying simply, “DON’T YOU DARE.” The post got lots of love from group members.

Some respondents are overtly political in their responses, calling into question the seriousness of the pandemic and others expressing frustration, even anger, at government-imposed restrictions on events and movement, while others claimed the Centers for Disease Control and the World Health Organization were putting out misinformation about the healthy crisis.

There was dissent. Some brought up logistical concerns, such as the crowded food tent, the evening gatherings with bonfires and the like, all the kinds of things that go into making HSF what it is. It’s at heart a social event, and much of that socializing takes place nose to nose and not from the CDC-recommened six feet away.

There are societal health concerns that some would be HSF attendees cite. Will the pandemic be under control by mid-October? Dismissing the misinformation claims that some posters shared, the medical consensus is that we’ll still be in the midst of this thing by then. Some experts are saying, in fact, that we could be experiencing a peak of infections by then as social distancing is relaxed, and Dead Cow Lake is far away from any form of medical care. Hell, it’s far away from any form of civilization, which is in great part why HSF’ers love the setting so much.

Still, others point out that no one would be forced to attend, so why call it off and take away their choice, while still others point to High Sierra’s liability if it decides to go ahead with it.

It’s clear that there is no easy answer here. Calling it off is the conservative decision, though not one favored by conservatives. Yet holding it would raise so many safety and health issues on so many fronts that even if you doubt how much of a danger COVID-19 presents to those who contract it, one has to recognize the risks the exposure would present to those who attend and those they will later interact with.

As I said at the beginning of this piece, leadership is easy when the decisions don’t have many consequences. I’d go beyond that and say that leadership doesn’t really begin until the decisions get hard. And this one couldn’t be any tougher.

Here are photos from the 2019 High Sierra Fly-In 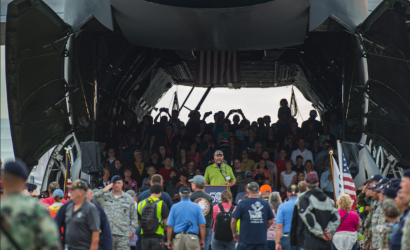