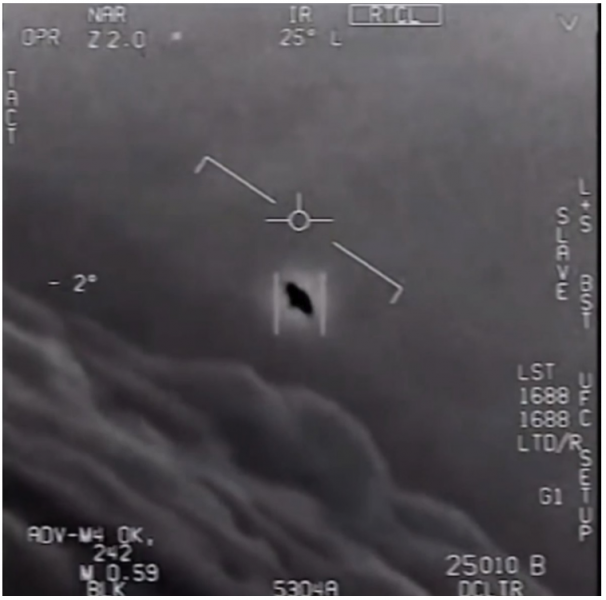 The news over the weekend of the military’s interest in talking about Unidentified Flying Objects (UFOs) has captivated the world, which is preferable to being captivated by aliens, I suppose.

It’s not news that a program existed, but we’re now learning that it continues to exist, and pilots have come forward with stories of additional encounters. That shadowy program, called the Advanced Aerospace Threat Identification Program, started up in 2007 and was shut down in 2012 after funding ran out. That’s the official story anyway. But according to multiple news sources, the program appears to be ongoing, though civilian sleuths have been unable to locate its source of dough. One could call it the Unidentified Funding Office. It’s apparently top secret, but no one is likely to get in trouble for revealing it because, remember, it doesn’t really exist.

But what about the UFOs it’s studying? Do they exist? And what are they? And who’s flying them? There are some inescapable conclusions.

When explaining away such phenomena in the past, the military used the now clichéd explanations of swamp gas and mass hysteria. But these objects spotted off of both coasts and bearing an uncanny resemblance to each other can’t be either natural phenomena, mistaken identification of known flying objects (KFOs?) or the result of pilots seeing something that they’ve been led to believe are there. There’s a third option today that didn’t exist at the time of the Roswell incidents—that our systems were hacked by outside forces.

First, the swamp gas thing. The object spotted by Navy pilots in 2014 gives pause. They were flying Super Hornet fighter jets in close formation when an object suddenly appeared between them. The object, which the pilots described as a sphere encasing a cube, could nearly instantly accelerate to hypersonic speed and climb at rates unknown in human aviation and that human pilots would not be able to survive. Similar objects at much farther range were picked up by onboard and ship-based radar systems, with the course and altitude readouts agreeing between ship and jet.

This tells us a few things with a high degree of certainty. First, it wasn’t swamp gas. There was no swamp nearby, and gas of any kind is incapable of behaving as the spotted UFOs did.

Mass hysteria is another subject that deserves close scrutiny. Known technically as collective obsessional behavior or mass psychogenic illness, the phenomenon is factually recognized in modern psychological thinking as an observable behavior that can be documented, and has been. There are numerous cases of it afflicting groups of people. A famous case involved a body in Southern California that was emitting toxic fumes and making health care workers, including doctors, violently ill. It was all in their minds. And while one might guess that collective obsessional behavior overwhelmingly affects people without professional certification or college degrees, one would be wrong. The majority of documented cases involve highly trained, well-educated people. What no documented incident of mass psychogenic illness has is physical evidence that the focus of the behavior is real. In this case, there’s extensive evidence of UFOs.

Perhaps most important is that the details of the sightings almost certainly indicate that these are actual objects and not hacked software. The act of hacking the software of F-A/18 fighter jet radar and weapons acquisition systems, which are classified technology, would be daunting even for the people who build those systems. But the thought of simultaneously hacking the radar systems of ship and land-based installations is not only practically impossible—but very likely impossible—period. And if one were to do so, why would they use it to create periodic sightings of strange objects?

The only conclusion is that these are actual objects that behave in ways that no known objects behave or could reasonably be expected to behave.

Could they be secret military technology? That’s not likely, either. Why would the military play such games with top-secret tech? The short answer is, they wouldn’t.

But apart from these objects being from a foreign government, which is even harder to fathom than supposing they were from our own, it’s the only real explanation.

Unless they really are aliens. If so, and if our would-be alien overlords are listening, email me with more details. Just like Agent Mulder, I too want to believe. And if not that, at least get to the bottom of a mystery that’s getting less mysterious all the time.